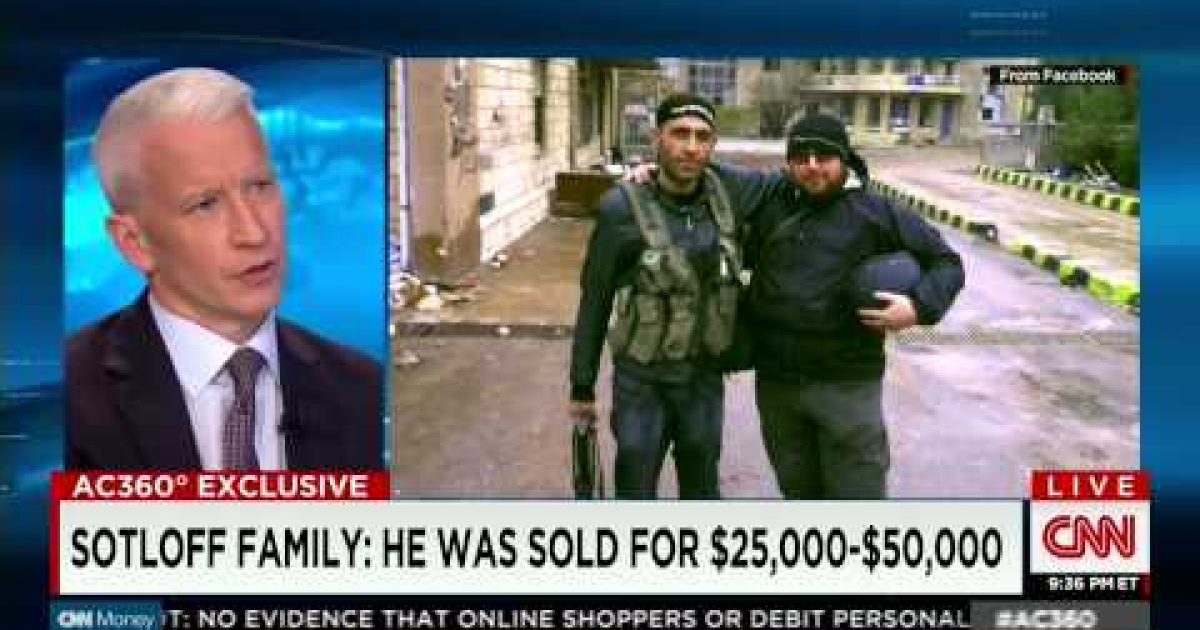 Barak Barfi, the spokesman for the family of Steven Sotloff, the second reporter brutally decapitated by the ISIS terrorists, spoke to Anderson Cooper on his CNN program Monday evening. Barfi’s words were guarded as not to place other hostages in danger but did offer new details about the journalist’s capture, including that Sotloff was sold out at the Syrian border, the Obama Administration is lying to the public and the administration could have done more to help the captured reporter.


Cooper: You spoke to him just shortly before he was taken.

Cooper: He knew the risks and yet he did it — he repeatedly went out to tell people’s stories.

Barfi: For the first time we can say Steven was sold at the border. Steven’s name was on the list that he had been responsible for the bombing of a hospital. This was false. Activists spread his name around.

Cooper: He was sold at the border?

Barfi: Yes. We believe that the so-called moderate rebels that people want our administration to support; one of them sold him probably for something between twenty-five and fifty thousand dollars to ISIS. And that was the reason that he was captured.

Cooper: How do you know this?

Barfi: We know this from our sources on the ground. It happened so quickly that when he was kidnapped, they didn’t have the time to mobilize those resources. Somebody at the border crossing made a phone call to ISIS and they set up a fake checkpoint with many people and Steve and his people that he went in with could not escape.


Cooper: When you’ve heard the administration’s response to all of this, what do you make of it from your vantage point?

Barfi: The administration has made a number of inaccurate statements. They’ve said that the families have been consistently and regularly informed. That is not true. I speak now only from the Sotloff family. I can’t speak for the other families. They said that these hostages were moved frequently. We know that most of the beginning of this year they were stationary. We know that the intelligence community and the White House are enmeshed in a larger game of bureaucratic infighting and Jim and Steve are pawns in that game. And that’s not fair. If there continues to be leaks, the Sotloff family will have to speak out to set the record straight.


Cooper: What do you mean that they were pawns? Can you say more?

Barfi: Well, I’ll just give you one example. People now are talking about the torture that some of these hostages suffered. People talked about specifically some of the tortures that Jim suffered. And that’s just not fair to his family. They need time to heal. There was an article last week in “The Wall Street Journal” basically revealing some of the details of the raid, the Pentagon, the intelligence community were pushing back against the White House and saying it was their fault, that they didn’t provide the surveillance necessary to find the hostages.


Barfi: Anderson, the relationship between the administration and the Sotloff family was very strained.

Barfi: Yes. We do not believe that they gave us the cooperation we need. The Sotloffs, once Steve appeared in that video, the Sotloff family made one simple request of the administration and they were rebuffed on that.


Cooper: Can you say what the request was?


Barfi: I can’t say that because I have to think about protecting the other hostages inside.

Cooper: The White House has put out a statement. I just want to read that to you. They say we understand the very real pain the Sotloff family is feeling at this time. Our thoughts and prayers are with them as they grieve Steven’s loss. They go on to say, “We condemn the murders of Steven and Jim Foley and we remain committed to bringing the perpetrators of these crimes to justice.” Do you have any response to that?

Barfi: When your view into the largest and most powerful government in the world is two FBI agents, that’s simply not enough. For 80-90% of the interaction you have with the government, that’s not enough. The administration could have done more, they could have helped us, they could have seen them through. These are people of modest means. They are not cosmopolitan, they don’t have college educations, they don’t understand the larger ramifications in foreign policy. I don’t believe they were afforded the opportunities of respect they should have been afforded by this administration.