The Southern Poverty Law Center (SPLC) started as a civil rights organization with good intentions, fighting racists such as the KKK. However in recent years it has gone crazy, leveling accusations of racism unjustly, branding as “bigoted” many groups and individuals whose only crime lies in their refusal to embrace the SPLC’s left-wing agenda (The group is so left wing that they receive grants from the progressive puppet master himself George Soros)

For example during the summer of discontent, when Americans were showing up at town hall meetings to protest the Obamacare bill, Mark Potok, spokesman and director of publications and information for the SPLC appeared in an ABC News story about how racist white militias are somehow connected to town hall protests. Potok shared his belief that the election of Obama has “triggered fears among fairly large numbers of white people in this country that they are somehow losing their country.” 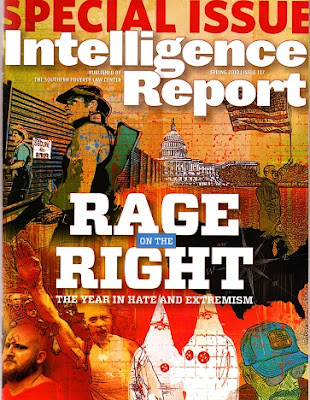 Last March the SPLC created a report called “Rage on the Right” which attacks Tea Parties, CPAC, Glenn Beck, Rep. Michelle Bachman and others as part of “dangerous, right wing groups rich with veins of radical ideas, conspiracy theories and racism.” The report was filled with misstatements and exaggerations that give the reader a feeling the SPLC never really explored what they reported about but simply watched commentaries on the subjects given by MSNBC’s Chris Matthews and Keith Olbermann.

Here’s one of the quotes from “Rage on the Right“

We are in the midst of one of the most significant right-wing populist rebellions in United States history,” Chip Berlet, a veteran analyst of the American radical right, wrote earlier this year. “We see around us a series of overlapping social and political movements populated by people [who are] angry, resentful, and full of anxiety. They are raging against the machinery of the federal bureaucracy and liberal government programs and policies including health care, reform of immigration and labor laws, abortion, and gay marriage.

Sixty-one percent of Americans believe the country is in decline, according to a recent NBC News/Wall Street Journal poll. Just a quarter think the government can be trusted. And the anti-tax tea party movement is viewed in much more positive terms than either the Democratic or Republican parties, the poll found.

It was the founders of this country said that Government is not to be trusted, that power is in the people not in the government. Yes the people are frustrated and angry, does that make them a raging hate group? What did that make the Anti-Bush MoveOn movement?

The signs of growing radicalization are everywhere. Armed men have come to Obama speeches bearing signs suggesting that the “tree of liberty” needs to be “watered” with “the blood of tyrants.
The Tree of liberty sign was a call to return to the constitution vision of our founders. The full quote is

The tree of liberty must be refreshed from time to time with the blood of patriots and tyrants. It is natural manure. Thomas Jefferson, letter to William Stephens Smith, November 13, 1787.

This year’s SPLC report on “hatred” is just as acerbically biased as last:

But despite those historic Republican gains, the early signs suggest that even as the more mainstream political right strengthens, the radical right has remained highly energized. In an 11-day period this January, a neo-Nazi was arrested headed for the Arizona border with a dozen homemade grenades; a terrorist bomb attack on a Martin Luther King Jr. Day parade in Spokane, Wash., was averted after police dismantled a sophisticated anti-personnel weapon; and a man who officials said had a long history of antigovernment activities was arrested outside a packed mosque in Dearborn, Mich., and charged with possessing explosives with unlawful intent. That’s in addition, the same month, to the shooting of U.S. Rep. Gabrielle Giffords in Arizona, an attack that left six dead and may have had a political dimension.

The SPLC ignored its own report at the time, saying the Neo-Nazi had ties to the “National Socialist Movement.” Gee I could be wrong but every time I did the research socialists were leftists. As for the MLK bomb no arrests have been made, but TPM reported that the bomb mirrored the type used by Palestinian Terrorists.

The theory is that someone hit with a piece of shrapnel covered in an anti-coagulant is more likely to bleed to death. Israeli officials have claimed in the past that Palestinian terrorists were using rat poison to make their bombs more deadly.

There has been no evidence whatsoever that this bomb had anything to do with people on the right.

All the evidence regarding the Tuscon shooting proves that not only was the perpetrator was simply disturbed, but he never even followed the news to have a political opinion. That’s why it’s not right to blame the left, even though the killer said one of his favorite books was the Communist Manifesto.

There is one group in the SPLC report named as one of the 1,000 hate groups in America that I can personally vouch for, as reported in the NY Daily News

Manhattan blogger Pamela Geller and her posse of anti-Islamic protesters have been branded a hate group by the Southern Poverty Law Center.

Stop the Islamization of America was included in the civil rights organization’s annual roundup of extremist groups – a rogue’s gallery that includes everything from the Ku Klux Klan to white supremacists and Nazis.

Geller’s group was one of the most vocal opponents of the proposed Islamic Center near Ground Zero.

The group was also behind ads that were placed on city buses urging Muslims to leave “the falsity of Islam.

Before I go on, in the spirit of full disclosure it’s important to reveal Pamela Geller has been my friend since I started blogging

There are people in the world who see a wrong, give a quick “oh that’s so sad” and get on with their lives. Then there are others who see a wrong and go all out to right it. That’s Pamela, someone who goes out of her way to do what we call in Hebrew “Tikun Olam” repairing the world. Pamela’s heart is the size of a skyscraper. She will grab a wrong by the neck and do whatever she can to eradicate the evil. For example, when honor killing victim, Aqsa Parvez, was buried without a tombstone Pamela raised money for Aqsa to have a memorial.

Pamela has thrown her weight into the fight to prevent the mosque being built on the ground zero site, not because she believes that Mosques should not be allowed to be built in NYC, but because she feels empathy to the families and victims. She feels the pain of those who see a Mosque on the site of a terrorist attack made in the name of Allah as a deliberate attack on their memory. Many of these victims feel the real purpose of the Mosque is to steal the heritage of the site, which is part of the Muslim tradition is to place mosques (or even to destroy) the religious, or sacred sites of others to usurp the tradition of others (the Temple Mount for instance).

And who do they use to support the SPLC? CAIR!

One need not go beyond the name of this hate group, Stop the Islamization of America, to recognize the validity of the Southern Poverty Law Center’s designation,” said Ibrahim Hooper of the Council on American-Islamic Relations.

In November 2008 a jury convicted the Holy Land Foundation and each of the associated defendants of raising money to fund Hamas terrorism. Implicated along with those convicted was supposed civil rights organization CAIR which lobbies the government from its headquarters in Washington DC. CAIR was named an unindicted co-conspirator in the Holy Land case and despite that, its leaders are frequent guests Network News Programs, where they are usually called upon to whitewash some terrorist act, or to call people saying that we are at war with radical Islamists, Islamophobes.

Despite this and other pieces of evidence implicating CAIR, the Hamas splinter group has constantly objected to the un-indicted co-conspirator label, but the FBI keeps reinforcing those ties. In a letter to Congress, the FBI reported:

Hamas is an offshoot of the Muslim Brotherhood, and trial exhibits show the Brotherhood created the Palestine Committee CAIR officials adamantly deny any involvement with either Hamas or the Muslim Brotherhood. The FBI letter, however, shows that the Department of Justice has not wavered in its conclusion that the internal record it possesses proves that connection.

In the end what were are left with is something right out of the first scene of Macbeth, when the witches set up the entire tragedy explaining that nothing will be as it seems, “Fair is foul, and foul is fair: Hover through the fog and filthy air.” The Southern Poverty Law Center which claims to be a civil rights organization is really an anti-right hate group, funded in part by George Soros. Pamela Geller who is described by the SPLC as a hater is really someone who is so filled with love and passion for her cause that she becomes a target for anyone who wishes to whitewash the connection between radical Islam and terrorism. And rushing to support the SPLC’s smearing of Pamela Geller is a group identified by the FBI as a “sister organization” to Hamas and the Muslim Brotherhood.

Sadly none of this was mentioned in the Daily News report, nor will it be pointed out by any mainstream media organization covering the bogus SPLC report.