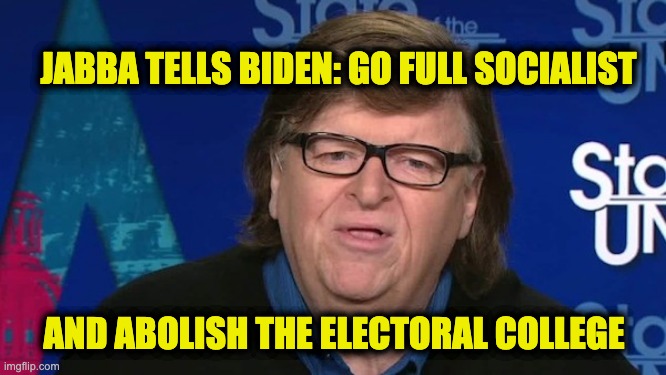 Socialist filmmaker er, Michael Moore could not be happier about the fact that the media — notice I said “media” — has called the 2020 presidential election for former Vice President Joe Biden, blocking Donald Trump from a second term in the White House. Again, this really hasn’t been finalized yet. There are still investigations and things going on, and honestly, anything could happen. Well, anything except for maybe me being named president (I love this country too much).

But anyway, Socialist Michael Moore posted an open letter to Joe Biden on his Facebook page, saying in part:

“YOU did it. WE did it! You stopped the madness. A grateful nation – and myself – are in a state of joy, hope, and relief.”

”Thank you for that! We are all eager to join with you to repair the damage done to our country — and to eliminate that about our society and our politics which gave us Donald Trump in the first place,” he added.

Yes, it seems Moore is calling for Biden to go full socialist and abolish the Electoral College.

Moore was quick to urge Biden, who has been declared the winner of the 2020 presidential election by several news outlets, to embrace socialism.

“I see various people trying to take credit for your victory — and using their personal agendas to push you away from the progressive Left and toward the cowardly center which believes that the best way to beat Republicans is to just be a more easily-digestible version of Republicans,” Moore wrote. “They think because Trump got 70 million votes the Democrats should reject Black Lives Matter, AOC, and anything that vaguely sounds like socialism — at a time when the majority of our citizens under the age of 35, according to most polls, prefer the idea of democratic socialism over the greed of modern-day capitalism. Why risk losing them? We need to listen to and understand why they feel this way.”

“Please do not make the same mistake an otherwise well-meaning President Obama made in his first two years. He wanted everyone to get along. He was willing to compromise on anything. Kumbaya. The Republicans had already decided they were going to block EVERYTHING Obama proposed and that’s exactly what they did for eight long years with a discipline and a ruthlessness we should probably envy,” Moore wrote.

“Don’t let this happen to you. Charge in on January 20th like FDR on steroids. You have no choice. People are dying! You need to sign executive orders and cajole, demand and shame Congress into action,” Moore continued. “And GO BIG! Eliminate the Electoral College through the National Popular Vote Act! DONE! Ratify the Equal Rights Amendment for women! Just one more state needed! DONE! Send in the Army Corps of Engineers to Flint to replace the poisoned water pipes! DONE!!”

“And none of the above needs a single vote of the United States Senate! In fact, this past summer, your ‘Biden-Bernie’ unity joint task force identified a whopping 277 policies and decisions of Trump’s that you have the legal authority to immediately reverse by executive order or presidential policy decision. Find that big fat black marker of his and do it!” the liberal filmmaker wrote.

Removing the Electoral College (in favor of a popular vote) is serious, like a magnitude 10 earthquake serious.  I won’t here go into how the Electoral College functions suffice to say that the majority of the votes cast throughout the physical United States would NOT count. Elections would be mostly determined by the votes of five big states New York, California, Massachusetts, New Jersey, and Illinois. For example, in 2016, Hillary won those five states by a total of 8.4 million. Trump won the rest of the country by 5.5 million. If the electoral college is eliminated, the 45 smaller states will no longer matter to national candidates.

The electoral college was created to prevent what James Madison called “the tyranny of the majority.” The system of electing a president as set up in the constitution is carefully balanced to safeguard both the majority and the minority’s rights.

It’s the Electoral College that allows each American citizen to have a voice in who leads the country, who represents their interests, and what direction we go as a country. It forces a president to heed the needs and wants of citizens in all states. If this is removed, you can basically pronounce the United States of America’s death on the spot.

This cannot be allowed to happen.