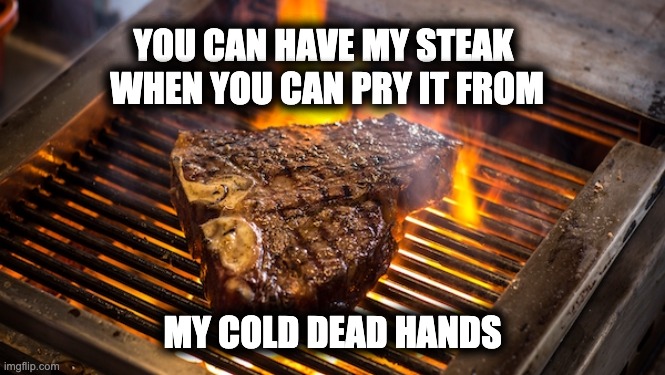 Despite the rumors, President Biden hasn’t officially announced he will regulate cows and red meat. But regulating red meat is part of the Socialist Green New Deal that Biden supports and included much of as part of his infrastructure plan. Most probably, red meat regulation will be part of Biden’s plan to subordinate the US to China by cutting greenhouse gas emissions in half by 2030. We need to start fighting those potential regulations now.

During the Oscars on Sunday, Senator Chuck Schumer (D-NY), another slave of the socialist left, hinted that red meat regulations were coming.

Excited to be watching the Oscars with an ice cold plant-based beer.

All beer is plant-based. So Schumer must have been previewing what was coming.

Why supporters of the unproven Climate Change hypothesis picking on cows?  Because cows have rude bodily habits–they fart–a lot.

On average, every cow releases 30 to 50 gallons of methane a day via farting and belching—-which is really nothing when compared to the fact that when growing up, I shared a bedroom with my brother. And I can promise you that he answered the call of the wild burrito much more than the average cow (he will tell you that it was me, but that would be a lie).

The climate doomsayers don’t understand s that everyone and everything farts. Even Alexandria Ocasio-Cortez cuts the proverbial cheese (but I doubt she admits it). In fact, the average human butt toots their own horn 10 to 20 times a day.  Note: Many of the far-left socialist programs the Democrats are trying to shove through smell like bottom burps– but they don’t emit methane.

Human one-cheek squeaks, at least the microbes that cause the spontaneous eruptions, happen to be good for us.

Modern society views flatulence as a negative. This is unfortunate because in most cases it’s the byproduct of a beautiful thing — the intricate ecosystem of bacteria living in your intestines.

“It’s a complex ecology, with various organisms coexisting and thriving,” Kashyap says. “When a complex carbohydrate reaches your colon, some bacteria will break it down first, and then some of their byproducts will feed other bacteria. The whole community benefits from a single carbohydrate that you consume.”

The scare-mongers of climate change are unfairly picking on cows. Cats fart, chickens, goats, kangaroos, termites, and most other animals produce Bronx cheers. As explained in this video:

Even Joe Biden’s biting dogs fart (although sometimes when humans fire a stink torpedo, they blame their dogs).

The bottom line is that while it hasn’t been announced as of yet, based on the Green New Deal, red meat will eventually be regulated. It is up to us meat-loving carnivores to fight any regulations before they are announced.

Red meat is only one issue with Biden’s Green New Deal. Most Americans don’t fully understand what’s in the Green New Deal and what it will do to America. Much of the deal is nothing more than a Trojan horse to destroy the economy and make the U.S. beholden to China — which has no intention of instituting similar measures — and it will force us to depend on China just to keep the lights on. A new book by Marc Morano is a must-read, Green Fraud: Why the Green New Deal Is Even Worse Than You Think, and will tell you everything you need to know about the socialist green new deal.