What Is This Love Affair with Socialism? 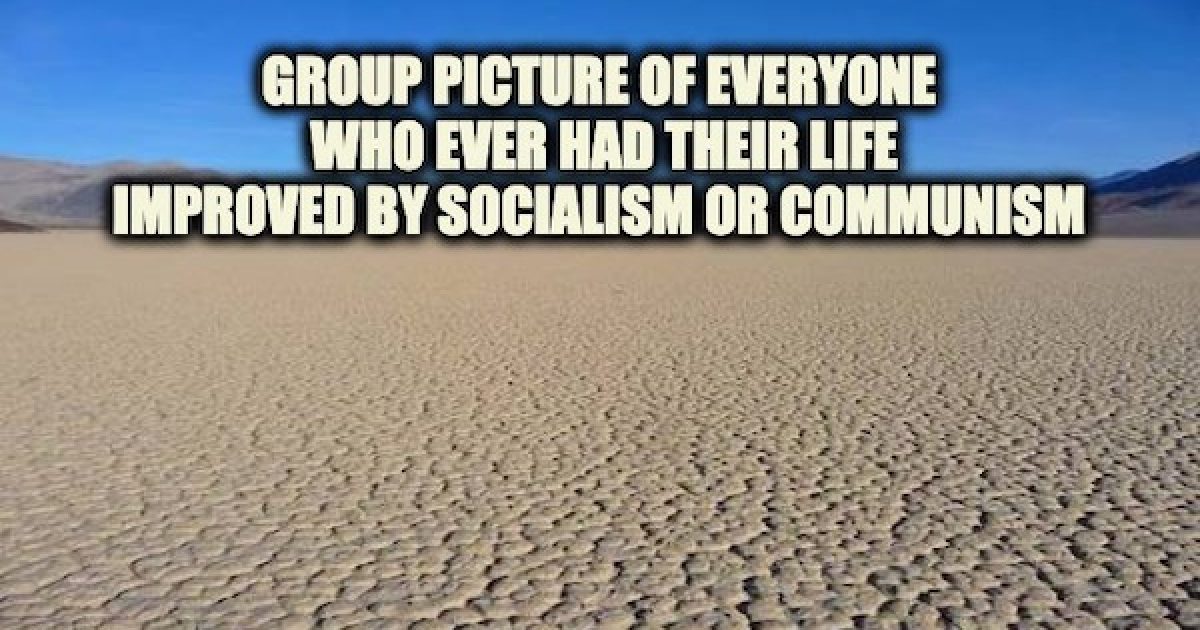 “Those who do not learn history are doomed to repeat it,” said Santayana. Many young people today claim to prefer socialism—and in some cases, even communism (which is socialism’s more violent form)—over capitalism.

Recently a candidate for city council in Denver declared that capitalism has failed and that socialism is the future. Candi Cdebaca said that we are in the “last phase” of capitalism—as if it is dying. In contrast, she said, “I believe in community ownership of land, labor, resources, and distribution of those resources.” And she is willing to implement this agenda “by any means necessary.” Last week, she won the election.

A new poll says that self-described socialist Bernie Sanders would beat capitalist Donald Trump for the U. S. presidency if the election were held today. By 9 points.

The problems with socialism and communism are they don’t work, and they must be forced to put it into practice. The communists built the Berlin Wall to keep the residents of East Germany from being able to flee “the worker’s paradise” into the West. Trump wants to build a border wall—not to keep people in, but to keep undocumented people out. The fact that so many want to come here is, in part, mute testimony to the success of capitalism.

Dr. Paul Kengor of Grove City College is a best-selling author of many books related to communism. One of his most recent books is called The Politically Incorrect Guide to Communism: The Killingest Idea Ever (Regnery, 2017).

In that book, he mentions a joking T-shirt given to him by one of his former students. The T-shirt read, “Communism has only killed 100 million people. Why not give it another shot?”

Kengor points out that we are told repeatedly that the problem with socialism/communism, which repeatedly fails to “deliver the goods,” only because the right people have not tried it.

Writes Kengor, “Again and again, we’re told that communist philosophy was never the problem. No, it was nasty leaders like Joe Stalin who have given communism a bad name. Stalin, you see, was an aberration. As were, presumably, Lenin, Trotsky, Latsis, Dzerzhinsky [founder of the KGB], Beria, Bulganin, Khrushchev, Voroshilov, Malenkov, Mikoyan, Brezhnev, Andropov, Chernenko, Chebrikov, Ulbricht, Ceausescu, Tito, Hoxha, Dimitrov, Zhivkov, Mao, Pol Pot, Ho Chi Minh, Mengistu Mariam, Kim Il-Sun, Kim Jong Il, Kim Jong Un, Fidel, Raul, and Che….” And, of course, this would also include Hugo Chavez and General Maduro, who has presided over Venezuela’s destruction, as it went from the best economy of Latin America to the worst—precisely because of socialism.

Kengor concludes: “You would think at least one commie, somewhere along the line, would have gotten it right. Why such ugly results if the theory is so pretty? Can’t these geniuses read?”

Capitalism does not produce an equal distribution of wealth. No system does. If you say that socialism/communism does, then you are covering over the fact that in the socialistic schemes, it is always the administration that does well, not the people.

Even Bernie Sanders prospers under capitalism, selling his book that railed against capitalism. He must have cried all the way to the bank.

For all its inequities, capitalism, free enterprise, a market-based system (whatever one might call it), delivers the goods for the most amount of people. In the words of Kengor, “The free market makes consumers sovereign.” Kengor quotes Ludwig von Mises in his 1922 book, Socialism, “The consumers patronize those shops in which they can buy what they want at the cheapest price….Their buying and their abstention from buying decides who should own and run the plants and the farms.”

Under communism, an inefficient, bloated bureaucracy makes such decisions, and the consumers have no choice—and are often forced into breadlines for inferior bread.

For all of its warts, capitalism produces much greater prosperity for the most amount of people.

What does communism produce? Ultimately, a lot of dead bodies. That was the answer from former communist Eugene Fox-Genovese, who, along with his wife Elizabeth, had been the editor of Marxist Perspectives.

When the Soviet Union finally imploded in the early 1990s, Eugene told interviewer Frederica Mathewes-Green in National Review (2/24/1997): “When it all collapsed, the question was, After seventy years, what do we have to show for it? Especially when it became clear that, even on a basic level, the system didn’t deliver the goods, the one thing it was supposed to do. So what we had to show for it was tens of millions of corpses.”

One might ask, “Why would God allow all the suffering that the socialists and communists have imposed on this world—not to mention the total loss of religious freedom in such places?” I would answer: “So that we don’t go down that road again.”