So Many Statues—So Little Time 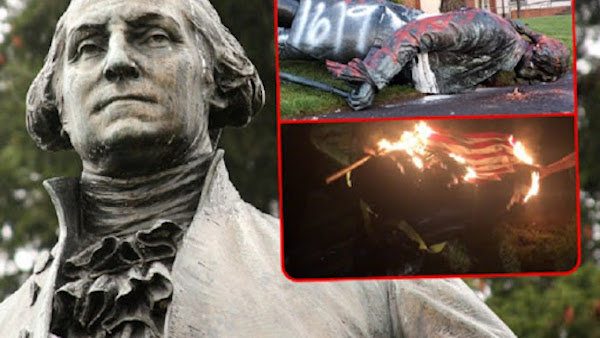 Ronald Reagan once noted, “Freedom is never more than one generation away from extinction. We didn’t pass it to our children in the bloodstream. It must be fought for, protected, and handed on for them to do the same, or one day we will spend our sunset years telling our children and our children’s children what it was once like in the United States where men were free.” social justice warriors

There is a frenzy right now of iconoclasm. We are going through a period where so-called “Social Justice Warriors,” are tearing down statues left and right.

It began with heroes of the confederacy, such as Robert E. Lee, but now it has even reached General Lee’s great rival—General Ulysses S. Grant, commander of the Union army.

When does it stop? Where does it stop? So many statues, so little time. Just last week in the state of Oregon, rioters targeted a statue of George Washington, spray-painting the words “Genocidal Colonist.” Then they burned a U.S. flag on the head of the statue, before pulling it down. And they reveled in their supposedly good deed.

No one is sacrosanct. Not even any of those four heads on Mount Rushmore. Statues of each of them are probably slated for the chopping block also. Like Washington, Jefferson statues have to go. He too committed the original sin of slavery.

Lincoln, though he freed the slaves, has had his statues desecrated recently, and the city of Boston wants to tear down a statue of the “Great Emancipator.” Now it’s Teddy Roosevelt’s turn. How did our 26th president violate today’s standards of political correctness?

WCBS radio reported (6/21/20), “The bronze monument—which features Roosevelt on horseback flanked by a Native American man and a Black man—has been at the front entrance of the [American Museum of Natural History in New York] since 1940.”

Mayor Bill de Blasio of New York said, “[The museum] has asked to remove the Theodore Roosevelt statue because it explicitly depicts Black and Indigenous people as subjugated and racially inferior…The City supports the Museum’s request. It is the right decision and the right time to remove this problematic statue.”

If the issue is slavery, then why would the self-styled revolutionaries tear down the statue of Ulysses S. Grant?

Protesters in San Francisco on Friday toppled the statue of former President Grant, in Golden Gate Park.  Grant helped to free all the slaves as the general who led the Union armies in the defeat of the slave-owning Confederacy, enabling the end of the horrible practice of slavery in this country.

They also tore down a statue of Francis Scott Key, who wrote our National Anthem, which today is boycotted by the “woke” culture, and Father Junípero Serra, who is a Saint in the Catholic Church.

It would appear that the real target of all the rioters and iconoclasts is America as founded. But a nation that does not remember its past does not know its future.

A few years ago, James S. Robbins, Ph.D., a writer for USA Today, wrote the book, Erasing America: Losing Our Future by Destroying Our Past.

Robbins told my radio audience when his book came out, “It’s a broad-based assault on the American story, on the American legacy. And the intention of it, in my opinion, is to wipe the slate clean, so that the progressives can write in the future whatever stories they want—emphasizing the values that they want to bring.”

To target George Washington is in many ways to target America itself. Born into the fourth generation of slaveholders, Washington freed his slaves—albeit at his death; but he freed them nonetheless.

Robbins told me, “I admire George Washington. He was the founder of our country. And yet he had this difficult legacy with slavery, like a lot of the founders and a lot of the people back then. But it’s not everything about them. He was not just a slave-master. He had a lot of other much more important, salient characteristics that we honor him for.”

Recently, I saw a 1950s television program on George Washington, highlighting the sacrifices he and his troops made, particularly in that brutal winter of 1777-1778 in Valley Forge. The man playing Washington noted that he has 12,000 men in rags and they are starving. 500 die every month of disease and deprivation. But they are sacrificing so that this upstart nation could be independent and free.

And now all these generations later, barbarians in the streets are tearing down statues of Washington and others. So many statues, so little time.

There is a battle for the soul of America. We should always remember what Ronald Reagan said—and thankfully, they haven’t torn down his statue…yet. Said the Gipper, “If we lose freedom here, there is no place to escape to. This is the last stand on earth.”