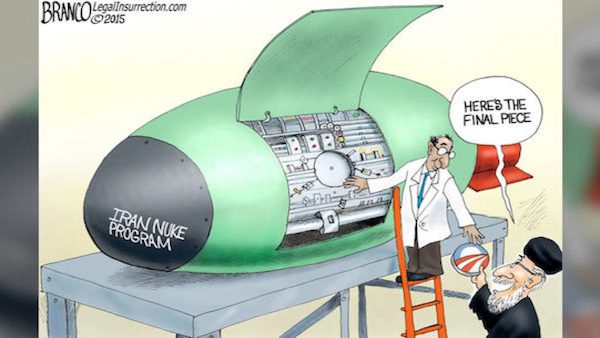 President Trump’s announcement about snapping back the pre-JCPOA sanctions on Iran Wednesday was not surprising, “Today, I’m directing the Secretary of State, Mike Pompeo, to notify the U.N. Security Council that the United States intends to restore virtually all of the previously suspended United Nations sanctions on Iran. It’s a snapback; it’s not uncommon.” Pompeo told FNC’s Bret Baier that he was going to follow that direction immediately: snapback provision useless

I’ll head up to New York tomorrow, tomorrow afternoon. I’ll meet with the UN Security Council president and then the secretary-general will provide notification of the snapback, and then 30 days from now all the sanctions that were in place will resume. They have been temporarily paused because of the ridiculous nuclear deal, and the world will be a safer place. The Iranians won’t have the chance to have Russian air-defense systems, Chinese tanks, all the things that pose risk and instability in the Middle East.

While the activation of the snapback provision of the Iran nuke deal by the U.S. is justified, an agreement made by former President Obama may have made it useless. The promise made to Russia, China, and Europe in writing said that if sanctions were re-imposed –their companies would be “grandfathered.”

Reported by Adam Kredo of the Washington Free Beacon in 2015,  President Obama gave Europe, China, and Russia a written guarantee that their companies who made deals with Iran, would not have to stop working with Iran should sanctions need to be re-imposed.

Secretary of State John Kerry admitted to Sen. Marco Rubio (R., Fla.) that the United States will work with foreign companies who financially engage Iran to shield them from penalties in the aftermath of Iran violating the agreement.

(…)Kerry acknowledged that the Obama administration had provided confidential guarantees that Washington “would not retroactively sanction companies” who helped bolster the Iranian economy and that the United States would work with those companies to bring their future activity in Iran into compliance with any new U.S. sanctions.

(…) The guarantees were provided in secret letters sent to China, Germany, France, and the United Kingdom. Kerry noted that the letters were transmitted to lawmakers as part of a mandatory disclosure required by legislation providing for congressional review of the deal.

In other words, all that talk about sanctions “snap back” was only words. Most of the companies that started working with Ayatollah Khamenei and the rest of the apocalyptic Mullahs get to keep working with them.

Kerry did say that the U.S. would help the companies involve with the rogue regime to “to wind down their contracts.”

“We would consult with relevant states on a case-by-case basis to address issues that may arise,” Kerry writes. “We have not, however, committed to provide a blanket exemption (or grandfather clause).”

Kerry tried to justify the assurances as necessary to convince American rivals such as Russia and China to go along with the deal. Both nations and their private companies stand to benefit greatly from arms deals and other future agreements with Iran.

“When we were negotiating this provision, some of our partners expressed concerns that if sanctions snapped back, their companies would be suddenly sanctioned for doing business in Iran that was consistent with the JCPOA,” Kerry writes.

Kredo reported that the secret deal was laid out in letters to China, Germany, France, and the United Kingdom.

The other surprise Kerry told Rubio at the time was that the deal allows Iran to test-fire ballistic missiles.

“It would not be a violation of the JCPOA [Joint Comprehensive Plan of Action] if Iran tested a conventional ballistic missile,” Kerry disclosed in the document.

Therefore the question remains even if the U.N. agrees to the snapback, are they still useless thanks to the Obama deal?