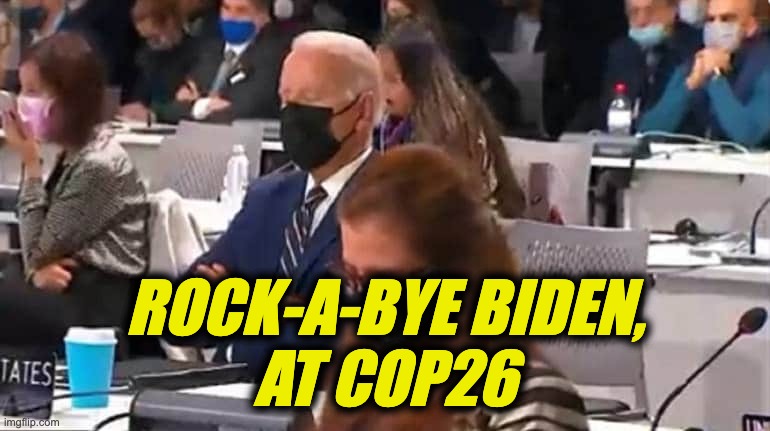 During the 2020 election cycle, then-President Donald Trump made several overt references to the health and well-being of then-candidate Joe Biden, often directly questioning his ability to remain cognizant and conscious at his advanced age.

As has become customary with Trump, Biden was given a nickname – Sleepy Joe – to illustrate his point. It appears as though the current President is living up to this moniker while away on business.

Social media erupted on Monday when a viral video appeared to show President Biden dozing off during opening speeches at the 2021 United Nations Climate Change Conference.

The 78-year-old Biden – who warned military servicemembers this summer that top Pentagon officials consider climate change to be the “greatest threat” to America’s national security in the coming years – sat with his arms crossed, appearing to drift in and out of sleep, in video shared by Washington Post reporter Zach Purser Brown.

“Biden appears to fall asleep during COP26 opening speeches,” Purser Brown wrote to caption a video that showed Biden closing his eyes for extended periods of time before an aide approached him with some type of message. Biden was also seen wiping his eyes and the video quickly went viral, with many mocking the president for appearing to take a quick nap.

Video of the Biden nap was soon circulating on social media.

Biden’s trip to this particular climate conference has been marred with controversy, beginning when the President let slip that he was being instructed by his staff on whose questions he should take during press conferences.

But one can’t really blame him for nodding off. He’s a 78 year-old-man with a disintegrating brain listening to speeches about global warming—a hypothesis whose connection to man has yet to be proven. He’s only there to satisfy his socialist base, which pushes the hypothesis because it’s really about worldwide redistribution of income. But on the bright side, he is wearing a mask—that should make his socialist buddies happy.

So? The world is a big place and America isn’t the center of it.

Cross-Posted with Flag and Cross.