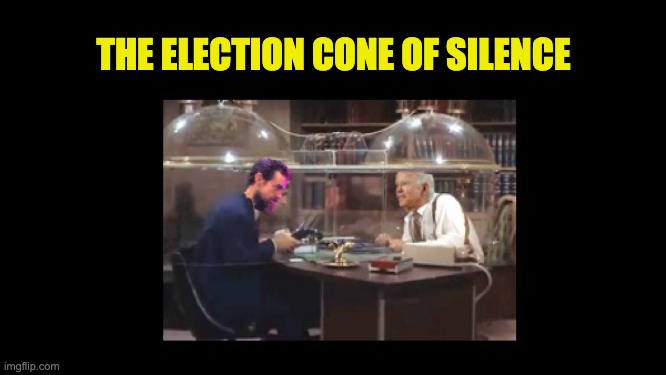 It seems 2020 is simply not done screwing us all over just yet. silencing vote disputes

“Get Smart’s” cone of silence seems to have overtaken the vote counting. Twitter is censoring President Trump’s tweets about vote counting, and many of the states that are still counting are not being transparent about the count. Heck, in Pennsylvania, they are demanding that GOP poll watchers stay at least twenty-five feet away from the counting where they can’t see what’s being done, and the DA of Philadelphia is threatening to jail pro-Trump protesters.

Twitter seems to be leading the block transparency charge. At the Twitter page for President Donald Trump over the last two days since the 2020 presidential election, you’ll see something that you never, ever thought you’d see in a million years here in the home of the brave and the land of the free: the President of the United States being censored by one of the world’s biggest social media platforms while votes for the election are still being counted.

Of course, many individuals on the left are thrilled with Twitter for doing anything they can to silence President Trump’s voice and others along with him. How far we’ve fallen from our First Amendment principles. After the polls closed on Tuesday, all of the President’s tweets related to the election were, in some form, censored. Here are some examples:

We are up BIG, but they are trying to STEAL the Election. We will never let them do it. Votes cannot be cast after the Polls are closed!

Last night I was leading, often solidly, in many key States, in almost all instances Democrat run & controlled. Then, one by one, they started to magically disappear as surprise ballot dumps were counted. VERY STRANGE, and the “pollsters” got it completely & historically wrong!

They are working hard to make up 500,000 vote advantage in Pennsylvania disappear — ASAP. Likewise, Michigan and others!

…..there was a large number of secretly dumped ballots as has been widely reported!

ANY VOTE THAT CAME IN AFTER ELECTION DAY WILL NOT BE COUNTED!

All of the recent Biden claimed States will be legally challenged by us for Voter Fraud and State Election Fraud. Plenty of proof – just check out the Media. WE WILL WIN! America First!

It really does feel like the leftist mainstream media is partnering with social media platforms to silence Trump and conservative voices everywhere to help pull off what might be the greatest voter fraud scheme in the history of American politics. Some have awarded Arizona, some haven’t. Some are reporting those irregularities. Others are just derisively reporting it–just saying team Trump is suing without explaining what seems funky.

We are dealing with many of the political elites and their sycophants in the mainstream media who have been trying to oust Trump since November 2016. We don’t know what’s going on, because there are too many complaints of irregularities that are not being covered. Making matters worse, the lack of transparency in some of those states increase public suspicion. And International democracy-haters has even chimed in derisively.

Here's a lesson in Democracy, In a real democracy they don't murder Homosexuals or dissidents. And one is allowed to contest election results without fear of prison…In other words you don't know a democracy from your very ugly ass

No matter who ends up winning this election, the American public must have confidence in the results, and the way the process is being handled and reported erodes that confidence. As Marcellus says in act one of Hamlet, “Something is rotten in the state of Denmark.”