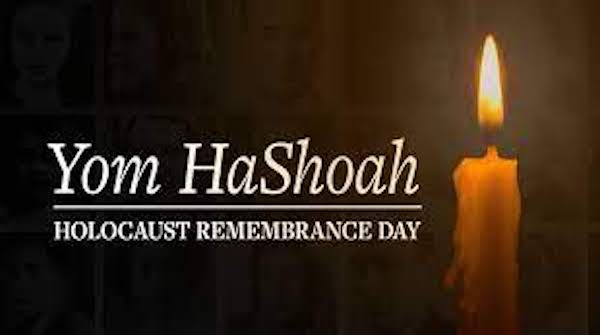 Today is Yom HaShoah, Holocaust Remembrance Day.  Its full name is  Yom HaZikaron laShoah ve-laG’vurah יום הזיכרון לשואה ולגבורה; which in English translates to “Holocaust and Heroism Remembrance Day.” The day is more commonly known as Yom HaShoah (יום השואה), a worldwide day of remembrance for the approximately six million Jews who perished in the Holocaust as a result of the actions carried out by Nazi Germany and its allies. Part of remembering is the realization that as the news about Hitler’s extermination of the Jewish people began to leak out to the world—there was silence. silence about Antisemitism

Hatred of Jews has afflicted people of diverse ethnicity, religions, and political views for more than 2,000 years. Even in the U.S.,  this great nation that has always been an oasis of freedom for Jews, Antisemitism is alive and well but mostly ignored. That silence allows the hatred of Antisemitism to fester. Holocaust Remembrance Day silence

Much of the mainstream Antisemitism is coming from the far left and the left-wing of the Democratic Party.  Making matters worse are Democrats and leftists who aren’t anti-Semitic. Democrats and leftists who aren’t anti-Semitic feed the others’ hatred by cowardly refusing to expose and/or fight the Antisemitism rampant in their ranks. And the mainstream media— Democratic Party sycophants protect the hatred by rarely reporting about the Jew-hatred.

Former President Barack Obama is an anti-Semite, but you wouldn’t know it from the adoring media. For example, during a phone call with Obama and Jewish leaders about the Iran deal, William Daroff, Senior Vice President for Public Policy & Director of the Washington office of The Jewish Federations of North America, tweeted about what the president was saying “Jews are leading effort to kill #Irandeal. ‘Same people opposing the deal led us into Iraq war,’” and he followed with “Canard: Jews got us into Iraq War.”  The same MSM that falsely accused Donald Trump of Antisemitism ignored Obama pushing the anti-Semitic slander that the Jews pushed this country to attack Iraq (former Israel PM Sharon warned Bush #43 against going into Iraq, correctly predicting that it would allow Iran to become more powerful)

Obama refused to recognize the Antisemitism of others.  When radical Islamists attacked the Kosher supermarket Hyper-Cacher (French for Super Kosher) in Paris on a Friday afternoon. The attack happened just before the Jewish Sabbath when they knew it would be crowded with Jews. Obama first insisted it wasn’t an anti-Semitic act. When the world leaders came together to march in Paris as a protest against the Charlie Hebdo shooting and the anti-Semitic Hyper-Cacher attack Obama was conspicuous in his absence.

During his presidency, Obama allied himself with Al Sharpton, a favorite of liberals. Sharpton has made a career of spewing hatred of Jews. Yet he has a TV program on MSNBC. During the 2020 primary season, every Democratic Party candidate met with him to “kiss his ring.” When the anti-Semitic Sharpton celebrated his 65th birthday in 2019, both New York Governor Cuomo and Senator Schumer went to the celebration to praise the Jew-hater.

Another MSNBC host, Joy Reid, believed in the anti-Semitic canard of the all-powerful Jewish lobby and agreed with then Iranian President Ahmadinejad in denying Jewish history when he said Israel should be moved out of the Middle East and into Europe.

During the first week of March 2019, the most liberal Congressional Democrats worked with the Congressional Black Caucus to blocked a resolution condemning the Antisemitism of Rep. Ilhan Omar and other Democrats. Instead, they passed a generic vanilla resolution that could have been written for Romper Room. All it said was being mean to others is a bad thing–doh!

Holding the #3 position in the House Democratic Caucus, Rep. James Clyburn. The South Carolina Congressman often uses the Holocaust as a political weapon. Clyburn’s constant hyperbolic references to Hitler and the Holocaust cheapen the memory of the actual horrors of the millions of people whose suffering we remember today. But the media is silent.

Former President Obama and other Democrats, including Maxine Waters (D-CA), Al Green (D-TX), Barbara Lee (D-CA), and seventeen other Democratic members of Congress, had very friendly meetings with racist, anti-Semite Louis Farrakhan, known for his Antisemitism and his holocaust revisionism:

Unlike his former boss Obama, President Joe Biden is not an anti-Semite. However, but he loaded his staff with Israel-haters and Anti-Semites. For example, he added Maher Bitar, one of the executive board members of the anti-Semitic, pro-BDS group, Students for Justice in Palestine, as Senior Director for Intelligence at the National Security Council.

The worst Jew-hater on the conservative side is Pat Buchanan, who was kicked out of writing for National Review by William F. Buckley because of his Antisemitism. Buchanan is also a Holocaust denier, once writing in the New Republic, “Diesel engines do not emit enough carbon monoxide to kill anybody. Yet places such as Rasmussen Reports and others pay for his column.  But the big difference is the MSM is not silent about Buchanan’s hatred because he is a conservative.

This is not to say that all Democratic public figures, or even most of them, are anti-Semites—but their silence, along with the silence of the media, allows that hatred to fester.  Nothing disinfects hatred like exposure.

On this Yom HaShoah, Democrats and the Media need to remember the famous words of German Lutheran pastor Martin Niemöller, who said:

Yom HaShoah is not only about remembering, it’s also about speaking out. We must demand the silence about Antisemitism ends. It’s the only way to ensure that ‘Never Again’ is never forgotten.