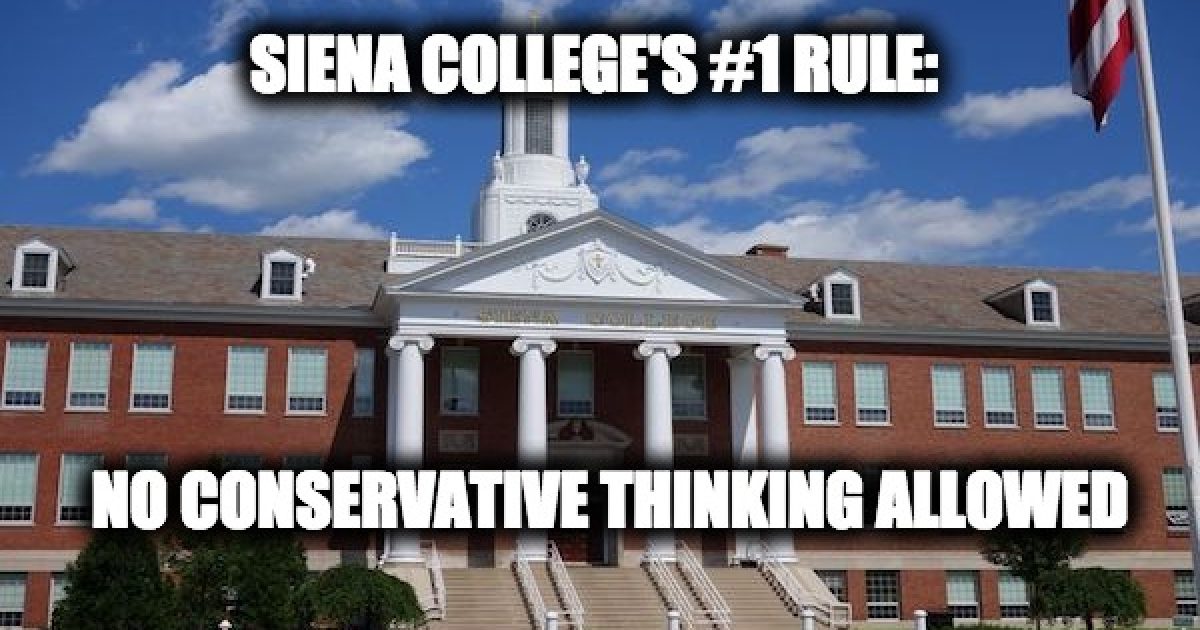 It is no secret that a big part of the curriculum at most American institutions of higher learning is the hatred of conservatives. The latest example occurred Siena College, located in Albany, NY.

Campus Reform has reported that Jennifer McErlean, a philosophy professor at Siena College, left a committee on civil  discourse because the thought of working with “evil” conservative students made her “miserable,” and she wanted to be free to protest events sponsored by a conservative organization on campus and approved by the administration

In an email obtained by Campus Reform, professor Jennifer McErlean strongly condemned the conservative students on her campus, voicing her desire to protest the upcoming “Let Freedom Ring” conference that is slated to feature several prominent political figures including investigative journalist James O’Keefe, lobbyist Roger Stone, and others.

The email appears to be part of a broader discussion chain between Turning Point USA Chapter President Antonio Bianchi and a university alumnus. While the professor addressed her grievances to the alumnus, she also copied Bianchi on the email, which personally berates him and another conservative student for their activism.

Notice that McErlean also expressed concern there would not be a significant counter-protest of the conservative events:

“I’m still worried that so many groups are thinking about doing ‘something’ that nothing will result,” she wrote. “Faculty will surely have forums that counter and are more inclusive on issues like free speech and gun rights the week before and the week after – but if no silent, sign-carrying wall of people is there to greet the conference goers I fear the message is that Siena is generally happy with the list of speakers and there will be no acknowledgment of how evil these organizations are!”

Siena Turning Point President Bianchi condemned McErlean on Facebook, saying she “exemplified everything wrong with collegiate bias and discrimination against conservative students in an email directed at me this morning.”

Professor Jenn McErlean, a philosophy professor at Siena College, exemplified everything wrong with collegiate bias and discrimination against conservative students in an email directed at me this morning.

In the email, she condones threatening tactics being used on conservatives on campus, insults myself, my members and our organization.

This is not acceptable.

This does not represent all faculty, staff or students at Siena. However, language like this from one is a horrible blemish on the reputation of a highly respected institution and Dr. McErlean should be ashamed.

If you are a Siena student who is not liberal, email Dr. McErlean and remind her YOU ALSO EXIST and YOU ALSO MATTER.

Bianchi told Campus Reform that professors “have tried to stop us every step of the way and this is just an unfiltered view of how they see conservatives on campus.

It’s interesting that in her bio Professor McErlean claims to be a champion of diversity despite the fact she does not believe in a diversity of thought:

Having taught at Siena for over 25 years, I have grown deeply dedicated to the ideals of Franciscan service and community-building. I have a special interest in supporting diverse students on campus. To this end, I helped to draft college policy for increasing faculty diversity and our Human Rights policy; I was faculty advisor for student clubs such as Latinos Unificando Nuestra America; I was a founding member of the Gay/Straight Alliance; I have worked closely with our own HEOP students, and served for more than 10 years on the Executive Board of the Albany Branch of the NAACP.

At least one of her “Rate My Professor” comments indicate that McErlean’s politics may be a problem in the classroom,

There are similar current comments also but they may be indicative of the Turning Point USA incident.

According to the Siena college curriculum book, “Philosophy teaches students to think clearly and critically about the most important questions of life,” but in order to achieve clear and critical thinking one must listen to and understand all sides of the argument. Sadly it is clear that Dr. McErlean (and based on the comment above by Nicole Commisso much of the faculty) does not believe in students have different beliefs than theirs. Because free thought doesn’t seem to be allowed Siena College is not safe for conservative students.