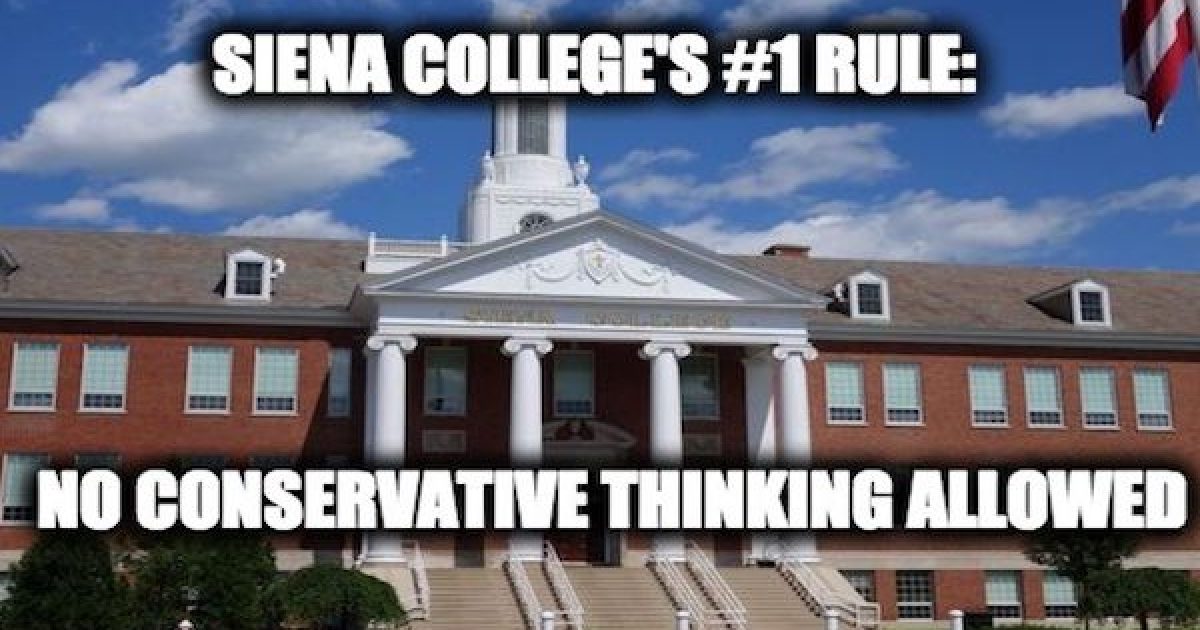 Siena College in New York ended up proving that it hates the First Amendment when it tried to seriously punish a conservative student who was passing around fliers alerting fellow students that the college was trying to eliminate the free speech of conservative students.

Proving that our supposed institutes of “higher learning” have become bastions of liberal thought-control, a student at Siena College in Albany, New York, felt that his professors were becoming a threat to his free speech. So, he decided to warn his fellow students that they all face a threat to their free speech, too.

The events surrounding the college’s attack on Zachary Butler, a “self-identified conservative” student (if I can steal the left’s phraseology), seem to have been instigated by conservative undercover videographer James O’Keefe’s “Let Freedom Ring” event at the college.

As O’Keefe explained it:

In the weeks coming up to the event, a professor at the school lambasted conservative students in an internal email. A Siena College junior, Zachary Butler, posted hundreds of copies of that email around campus to raise awareness about the administrative bias problem at college. For his activities exposing the attitudes of college professors, Butler came under fire by the college.

O’Keefe went on to note after the student sent out his fliers, that the school came down on him like a pack of brown-shirted stormtroopers.

The story of the school’s attack on Butler’s free speech — indeed, its attack on his academic career and his future — was reported in March by Campus Reform.

The conservative college site reported that in an email Siena philosophy professor Jennifer McErlean attacked the free speech of conservative students on the campus. left a committee on civil discourse because the thought of working with “evil” conservative students made her “miserable,” and she wanted to be free to protest events sponsored by a conservative organization on campus and approved by the administration.

The email appears to be part of a broader discussion chain between Turning Point USA Chapter President Antonio Bianchi and a university alumnus. While the professor addressed her grievances to the alumnus, she also copied Bianchi on the email, which personally berates him and another conservative student for their activism.

Not long after Butler began to warn other students about this bias against his and other conservative students’ free speech, the school launched an “investigation.” But, naturally, the school didn’t start to investigate the hate-mongering indulged by its own professor. Of course not. No, what the school started “investigating” was the student who feared that his free speech was being assaulted. Why investigate him? Because the school wanted to find a way to destroy the student, not punish the un-American hate indulged by the professor.

Eleven days later, on April 2, Butler was served a “Notice of Charges” that claimed his flyering efforts have “adversely [affected] the health, welfare, and/or safety” of campus community members “or the name and/or reputation of the College,” and that he also violated the school’s posting policy.

While Butler agrees that he violated the posting policy, he refutes the charge that merely posting flyers negatively impacted the “health, welfare, and/or safety” of his fellow students and professors.

“What I would like to know is how my peaceful protest of posting screenshots of an email that was already publicly available around campus in any way adversely affected the health, welfare, safety, or reputation of this institution,” Butler told Campus Reform.

If Butler is found guilty, his sanctions could include anything from suspension, expulsion, withholding of his degree, probation, a fine, his parents being notified and possibly a transcription notation, according to the school’s Student Life Handbook.

O’Keefe had the opportunity to interview the student who became to object of the college’s attack on the constitution:

Now, imagine what this situation, here, means. If Butler was a liberal and was passing out fliers for Black Lives Matter, or some mentally ill transgender issues, he would be hailed as a hero by these KGB-like college administrators. All such piddling worries as “violations of the school’s posting policy” would be ignored as professors and college administrations would line up to praise such a person.

Ultimately, after much publicity, the college finally dropped its dubious and un-American charges against the student.

“Though he was initially charged with violating the school flyering policy and negatively impacting the ‘health, welfare, and/or safety’ of the school community, his April 10 meeting with the school conduct officer—a few days after Campus Reform’s initial story on the issue—revealed that both charges had been dropped,” the conservative college watchdog site reported.

“It is mind boggling to me how my posting of the email was any more damaging to the name of the school and welfare of the community than the content of the email itself,” Butler said.

But, Butler is a conservative, and conservatives have no free speech on our college campuses.

Butler said he learned a lesson from the experience.

“My intentions were never to harm anyone. I simply wanted attention brought to a serious issue,” Butler explained. “If there is anything I learned from this experience it is that if you truly want to be heard, you have to be loud. Actions speak louder than words.”

It is a lesson we all need to learn. The left knows this well and has been playing the role of the “squeaky wheel” for decades while conservatives have blissfully wandered through their lives generally not paying much mind to the damage the left is doing to our rights.

Incidents like this should alarm ALL OF US. Conservatives must not dismiss this as merely a problem in our colleges and universities. The attack on free speech in our schools is only the canary in the coal mine warning us of how the left wants to eliminate free speech outside of the campus.

Count on it. Fear it. Rise up against it. Liberalism is not just “another legitimate point of view.” It is a threat to the very freedoms guaranteed by the constitution. With its policies regarding the 1st Amendment, Siena College should be declared ineligible for state and federal grants.

Much of this post was originally seen at Constitution.com.

Stimulus Checks Will Go to Criminals & Illegals After Dems Reject GOP Attempt to Stop It
March 6th, 2021 Flag And Cross

False Flag Attackers: Can The Guilty Parties Please Stand-Up? These Are The One’s That Admitted It! (Video)
March 6th, 2021 Sons of Liberty Media