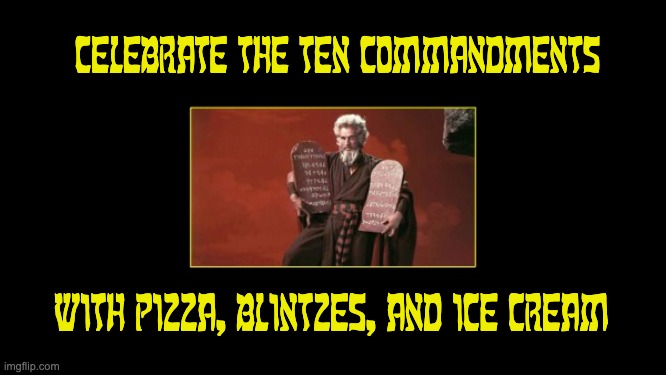 Beginning with the sunset on Sunday, May 16, Jews throughout the world will start to observe Shavuot, my personal favorite of all the Jewish holidays (more on that later). Shavuot commemorates that incredible day when God gave the newly freed Hebrew slaves the Torah and what is popularly known as the Ten Commandments.

People living in the US (including many Jews) might think that Chanukah is the major Jewish holiday.  Actually, it is a very minor holiday. Shavuot is one of the three major festivals (the other two are Passover and Sukkot). In biblical days, Jews would travel from all over the Holy Land to Jerusalem to make a sacrifice at the Holy Temple during each of those three festivals.

The Rabbinical sages tell us that this verse is saying that God was already on the top of Sinai waiting for the Hebrews to wake up, but the newly freed slaves forgot to set the alarms on their iPhones overslept. The Lord had to make a heck of a racket to get them to wake up. That’s why on the first evening of the holiday (Thursday night this year), synagogues across the world have what’s called Tikkun Leil Shavuot (repairing the Evening of Shavuot). Jew spend all night studying Torah make up for the fact that they screwed up and overslept at Sinai. The purpose is to show God that we appreciate the Torah he gave us, and there will be no grabbing an extra few winks this time. And to help them to stay awake–Jews eat good stuff while studying all night.

There is an old story about a religious school Gan (kindergarten) teacher talking to her students about the holiday of Shavuot.

“OK Class, who knows why we celebrate Shavuot?”

“Oooh, Oooh, I know,” said little Karen, “Shavuot is when we light candles and celebrate the Maccabees.”

“No Karen, that’s Chanukah good try,” said the teacher. “Anybody else?”

Shmuley raised his hand. “Shavuot is when we wear costumes and play with noisemakers”

“I know Shavout,” Johnny said softly,” You see, Moses went up the mountain and stayed for 40 days and 40 nights.”

Johnny continued and with each word out of his mouth he seemed to gain confidence, “After 40 days Moses came down the mountain carrying two stone tablets that had the Ten Commandments on them.”

“And if he sees his shadow we have six more weeks of winter.”

Folks, Chag Samayach (Happy Holiday). And Whether you are Jew or Gentile, remember to make sure you eat lots of your favorite flavor of ice cream (it’s God’s will).

Oh, and as for those ten words (commandments) that were written on the two tablets that Moses, an 80-year-old alter kaker brought down from Mount Sinai, I have cross-posted them in English below:

1)You are to have no other gods before me.

2)You are not to make for yourselves a carved image or any kind of representation of anything in heaven above, on the earth beneath, or in the water below the shoreline. You are not to bow down to them or serve them; for I, the Lord your God, am a jealous God, punishing the children for the sins of the parents to the third and fourth generation of those who hate me, but displaying grace to the thousandth generation of those who love me and obey my mitzvot.

3) You are not to use the name of the Lord your God lightly because the Lord will not leave unpunished someone who uses his name lightly.

4) Remember the day, Shabbat, to set it apart for God. You have six days to labor and do all your work, but the seventh day is a Shabbat for the Lord your God. On it, you are not to do any kind of work -not you, your son or your daughter, nor your male or female slave, not your livestock, and not the foreigner staying with you inside the gates to your property. For in six days, the Lord made heaven and earth, the sea and everything in them; but on the seventh day, he rested. This is why the Lord blessed the day, Shabbat, and separated it for himself. [Think about that, the first time in history a designated day off….and it wasn’t a union demand,]

9) Don’t give false evidence against your neighbor  [Note: this is Al Sharpton’s least favorite of the ten.]