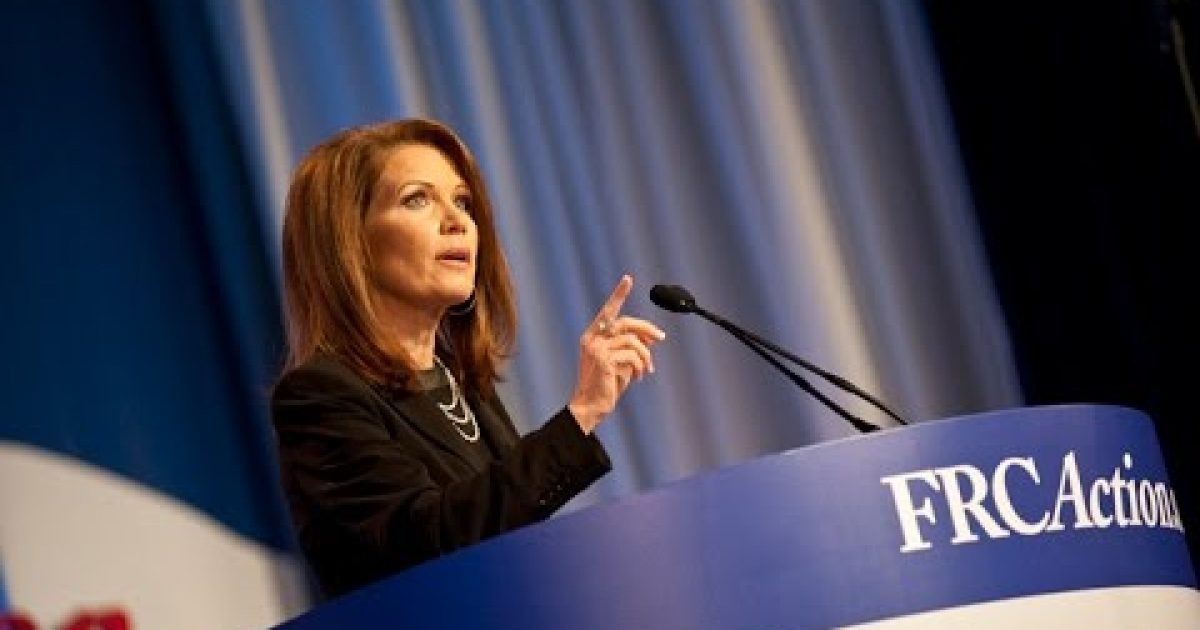 Buried in a report about Michele Bachmann (R-MN) possibly being targeted by ISIS, the “Politico”
reporters cherry-picked words from her speech at the Values Voter
Summit to falsely claim “Bachmann has been publicly critical of not only
ISIL, but also Islam, calling on President Barack Obama to declare war
on the religion”

In the article “Michele Bachmann given
security detail over ISIL threat,” reporters Anna Palmer and Rachael
Bade offered the reasons why the Minnesota Republican may have incurred
the wrath of ISIS:

Bachmann has been publicly critical of not only ISIL, but also Islam, calling on President Barack Obama to declare war on the religion during a speech at the conservative Value Voters Summit at the end of September.

“And
I believe if you have an evil of an order of this magnitude, you take
it seriously,” Bachmann said. “You declare war on it, you don’t dance
around it. Just like the Islamic State has declared war on the United
States of America.”

Bachmann did not call on the
President to declare war on Islam during the speech, she called on him
to declare war on ISIS. The one time she talked directly about Islam it
was in reference to a statement by the President made two weeks earlier
that ISIL had nothing to do with Islam. Bachmann’s response was that the
terrorists’ motivation was Islam. It is clear by the video and transcript excerpted below, that at no point of the speech was she asking for a war in Islam:

But
one slogan that she [Hillary Clinton] won’t be able to use, al-Qaida is
on the run. Remember that one in 2012? As the rise of radical
Islamic jihad — although that’s redundant — dominates the headlines,
we are seeing this enemy as pure evil as they are cutting off the heads
of innocent people; that in August buried literally women and children
alive. These are Christian brothers and sisters. These are Yazidis
tonight — tonight — who are on Mount Sinjar and they are continuing to
suffer.

I recently got an email from a pastor this
week who told me there’s a missionary working with the Yazidis who are
barely clinging to life. They’re sleeping in the cold mountains, they
don’t have blankets, it’s a whole different world now, and we can’t
forget them.

We can’t forget the others who are
persecuted around the world just because of their religious beliefs.
And why is that? It’s because we have jihadists who are subscribing to
this radical ideology that believes that dying in the name of Islam gets
them to heaven. This is spiritual warfare, and what we need to do is
defeat Islamic jihad.

Sadly, our president has the
wrong prescription. He even failed to acknowledge their motivations for
bringing about jihad. Yes, Mr. President, it is about Islam. (Cheers,
applause.) And I believe that if you have an evil the order of this
magnitude, you take it seriously. You declare war on it, you don’t
dance around it, just like the Islamic State has declared war on the
United States of America. You kill their leader, you kill their
council, you kill their army until they wave the white flag of
surrender. That’s how you win a war.

And you don’t
preemptively take anything off the table. You don’t advance signal your
enemy as to what your intention is. The president asked Congress to
follow him in a Vietnam-style slow walk response, and I said no because
either the United States chooses to decisively defeat this brutal evil
with every resource we have or we’re going to have to answer to the next
generation why we failed to defeat the totalitarian evil of our day.

“Politico”reporters
Palmer and Bade were either too lazy to check the facts or deliberately
tried to slander Bachmann. Either way they owe Ms. Bachmann both a
retraction and an apology.