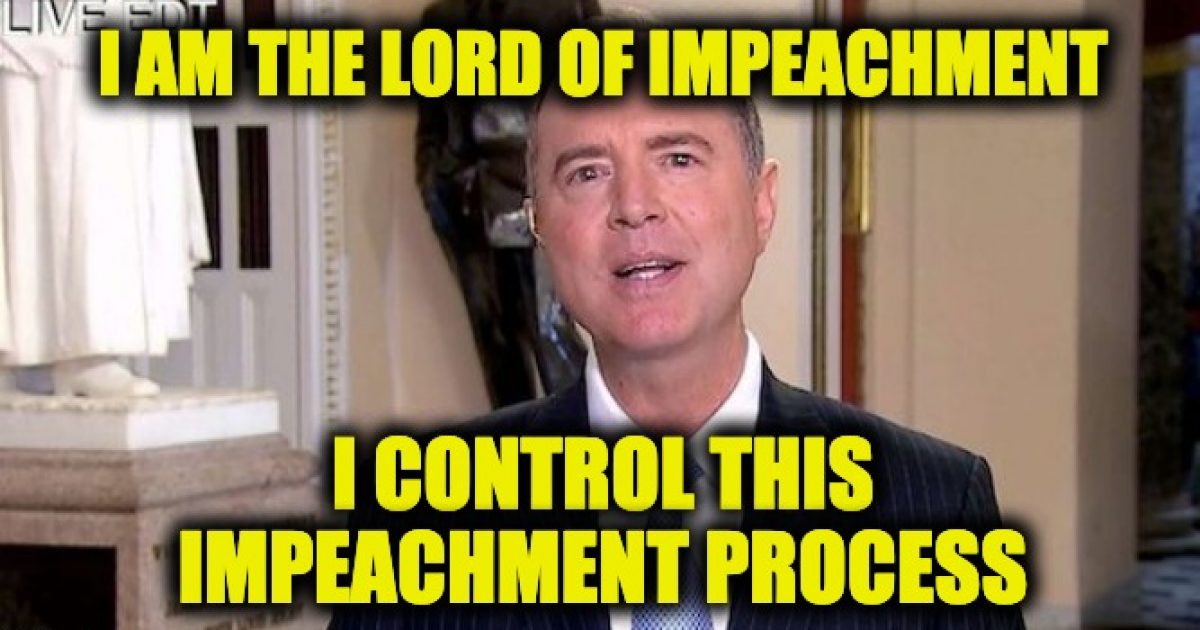 On Monday, Kash Patel, a White House official serving on the National Security Council (NSC), filed a $25 million lawsuit against Politico, alleging that Adam Schiff, the California Democrat, leading the sham impeachment against President Trump, “weaponized the media” with defamatory information to advance his goal of removing the president from office.

Patel, Breitbart says, is a former staffer to Rep. Devin Nunes, R-Calif., who moved to the NSC to advise President Trump on national security and intelligence matters.

The suit, filed in Virginia, names Politico reporter Natasha Bertrand and Robert Allbritton as defendants and says they worked with Schiff and members of his staff to defame him.

According to the lawsuit:

Defendants intentionally employed a scheme or artifice to defame Kash with the intent to undermine the President’s confidence in Kash and to further Schiff’s impeachment inquisition. Defendants acted in concert with Schiff to accomplish an unlawful purpose through unlawful means, without regard for Kash’s rights and interests.

(…) Defendants abandoned all journalistic integrity and violated their own code of ethics in order to further the conspiracy with Schiff. Defendants did not seek truth; report truth; minimize harm; act independently; and they most certainly were not transparent.

In the lawsuit, Patel says Bertrand wrote two false stories claiming he was feeding Trump negative information about Ukraine and misrepresenting himself as an expert on the country to the president.

Between October 14, 2019 and November 8, 2019, Politico and Bertrand colluded, collaborated and conspired with Schiff to defame Kash. Schiff, or members of his staff or aides acting at his direction, leaked to Bertrand the closed-door testimony that [former former senior advisor and European and Russian affairs specialist who served on the NSC Fiona] Hill and [NSC Director of European Affairs Lt. Col. Alexander] Vindman gave in the subfloor of the Capitol Visitor Center. The leaks occurred in real-time. Schiff leaked the testimony to Bertrand because Schiff knew that it would be a violation of House Rules and Committee Rules for Schiff to publish the substance of the testimony himself.

The joint collaborative purpose of the leaks was to publish Hill and Vindman’s false and defamatory statements, including Hill and Vindman’s egregious personal attacks on Kash, so as to further Schiff and Politico’s interests in harming the President and advancing the impeachment inquisition. In furtherance of the conspiracy, Bertrand secretly communicated with Schiff or his staff via encrypted email, including proton-mail, and messaging services, such as Signal.

And, Patel says, Politico knew the information was incorrect.

Between October 23, 2019, and November 8, 2019, the Defendants, acting in concert with Schiff, made, published and republished numerous false factual statements of or concerning Kash without privilege of any kind. … On November 8, 2019, Schiff released the transcripts of Hill and Vindman’s closed-door, secret interviews conducted in the Capitol Visitor Center. The transcripts demonstrate that Politico, Bertrand, Schiff, and his staffers misled the public in the First and Second Politico Pieces, and intentionally lied about the substance of Hill and Vindman’s interviews.

Politico, Bertrand, and Allbritton knew that Schiff had a preconceived agenda that he was actively promoting. They knew about Schiff’s extreme bias and hatred of President Trump. Significantly, they also knew that Schiff was a wholly unreliable source because of his penchant to tell lies and to mislead.

Defendants’ reporting was categorically and knowingly false. At no time prior to October 30, 2019 had Kash ever communicated with the President on any matters involving Ukraine. Kash never supplied any Ukraine “materials” to the President. Kash is proud of his record as a dedicated national security professional who is entrusted to handle our nation’s most sensitive matters. At no time did Kash stray from his mission to protect the homeland in service to the President and the NSC.

Politico refuses “to retract or clarify” the stories, Breitbart said.

“This lawsuit is high on bombast and low on merit. It is unserious and is a public relations tactic designed to intimidate journalists and media organizations from doing their job,” Politico spokesman Brad Dayspring reportedly told Fox News’s, Howard Kurtz.

If the allegations in the lawsuit are correct, it would seem that Schiff is, indeed, engaged in a seditious conspiracy to illegally oust Trump by any means necessary.

I’ve been saying this for 2 almost years now, but since it doesn’t fit the media narrative and frankly destroys their already shaky credibility they’ll keep their lies & coverups going.

Main Stream Media is nothing more than leftist propaganda at this point. https://t.co/AxfXghVbhR

Sad, but true. Of course, we’ve known this for quite some time.