'Twitterverse' Angry At Show Of Partisanship And Lack of Patriotism But Is It Sign Of Dementia? 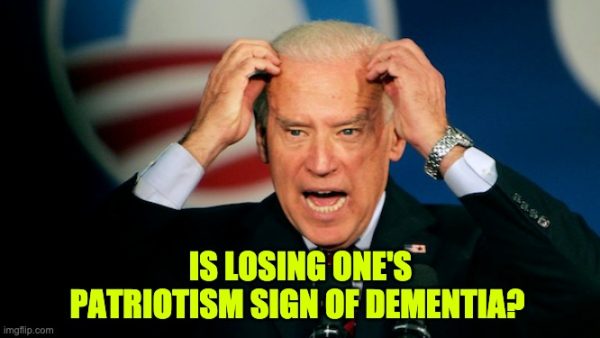 On Friday, Politico reported that presumptive Democrat White House nominee Joe Biden is planning to hold shadow coronavirus briefings to “…show how he would handle the crisis and address what he calls the lies and failures of President Trump.” Lies and failure? Either he is putting politics over the needs of this country, or his dementia is kicking in again.

“President Trump stop saying false things, will ya?” Biden said on Friday. “People are worried they are really frightened when these things don’t come through. He just exacerbates their concern. Stop saying false things you think make you sound like a hero and start putting the full weight of the federal government behind finding fast, safe, and effective treatments.”

Politico said Biden made his comments from his Wilmington, Delaware, home where he apparently learned about something called teleconferencing.

Let’s be clear.  This is, as one Twitter user noted, “sad, petty and useless.”

How sad, petty, and useless.

Is Biden going to call it the Dog Faced Pony Soldier Show?

It’s also a deliberate — and dangerous — attempt to sabotage the president’s efforts to combat the disease.

How is this not getting torn to pieces as a dangerous and outrageous idea https://t.co/lJV6v0lCTF

In other words, Jill Biden and the DNC will prop him up for less than 10 minutes and give him a list of things to say in large print, and he’ll still find a way to bungle through it.

Putting senile Joe who can’t keep straight what day it is out there in the public like this will only hurt his chances, not that I am complaining but this sounds more like elder abuse. I don’t approve of trying to undermine any president during an emergency. Bad idea. pic.twitter.com/915BCywyYP

This will go as well as McCain suspending his campaign to deal with the financial crisis. pic.twitter.com/V9kz1Bnpoi

Remember the condemnation @MittRomney faced for speaking about the terrorist attack in Benghazi before Obama, who was taking his time, did? “We have one President at a time,” they cried. @JoeBiden shouldn’t do this, it’s a nakedly political idea and pretty sick. https://t.co/R1gdpRmaDX

Hopefully he can remember his name by then

There’s another aspect of this:

But first – someone has to tell him what state he’s in and what planet he’s on.

I remember when all Americans faced the common nation’s enemy and got behind the leadership of the President.

Now, @JoeBiden is challenging America by attempting to be a destabilizing ally to this viral enemy.

Due to Joe’s failing mental abilities, he will be reading a script

What a despicable thing to do.

Can you even imagine how this would be perceived if Romney did this to Obama in 2012? People would have (rightly) called it out—and certainly wouldn’t have phrased it like this…

That’s right — by deliberately attempting to undermine and sabotage the president, Biden is, in effect, working AGAINST the American people and aiding the disease.

What prefect timing we need a new comedy show this should be funny as hell ? pic.twitter.com/kHa3GgYO8p

does he regularly talk to his own shadow? will he wander off set? Can he even read anymore?

Completely unhelpful and destined only to sow division.

He isn’t privy to any of the information the government has, he doesn’t have to actually be accountable for anything he says he “would” hypothetically do. This is just heckling from the sidelines in a time of true crisis. https://t.co/PQSRtTaT8Z

But being unhelpful and sowing division is what the Democrat Party does best, especially when it’s a Democrat whose mental facilities are diminishing.