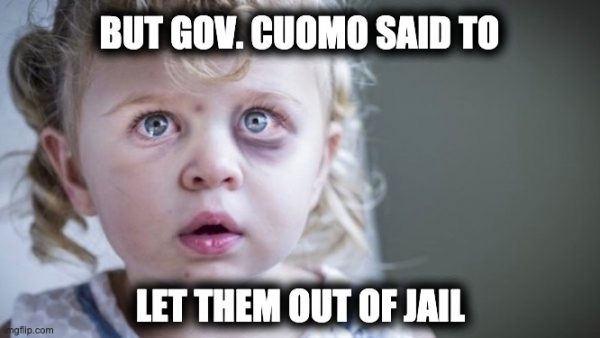 Eight registered sex offenders have been released from jail in Monroe County, New York, following an order from Governor Andrew Cuomo calling for 1,100 parole violators across the state to be freed due to concerns over the coronavirus.  Three of the inmates were registered as Level 3 sex offenders, meaning the court has ruled that they are likely to re-offend.

“We’re releasing people who are in jails because they violated parole for non-serious reasons,” Cuomo told MSNBC on Friday. The Cuomo administration directed the Department of Corrections and Community Supervision (DOCCS) to release 400 inmates in New York City and 700 across the rest of the state. He did not volunteer for any of the released inmates to live next to his house or the houses of any of his relatives.

Some, including the level 3 offenders, had reportedly been put up in a Holiday Inn Express.

It gets worse. WIVB 4 reports: “All three of the level 3 sex offenders staying at the Holiday Inn Express have been convicted for the rape of minors.”

How Could This Happen?

This is part of the problem in issuing blanket orders to release criminals as a means to halt the spread of coronavirus – a tactic championed by politically divided individuals as far wide as Alexandria Ocasio-Cortex and President Trump himself.

These three individuals technically met Cuomo’s criteria of having only violated parole for ‘non-serious reasons.’

But their original punishable violations were not taken into account.

DOCCS, in a statement to News 8, explained that they were released due to a “review of the underlying technical violation, not the original crime.”

The rape of a minor is a hell of a thing to simply ignore when deciding who gets released.

Patrick Phelan, the Chief of Police in Greece, New York, is justifiably outraged over the release of very serious felons.

“We weren’t told by anyone,” Phelan told WIVB. “I think good practice would be if you’re going to release convicted felons – some of them very violent – some of those level 3 sex offenders … you might want to give law enforcement the heads up.”

The police chief also noted that the Monroe County Jail release of over fifty prisoners makes little sense because there has been no evidence of coronavirus in the facility.

“They don’t have the virus in the jail,” he explained. “There’s zero cases.”

Greece Town Supervisor Bill Reilich is calling on Sheriff Baxter and all law enforcement agencies to join him in contacting Governor Andrew Cuomo and insisting he returns the inmates to their cells at Monroe County Jail. https://t.co/ednBkcAZFS

And yet, Cuomo’s DOCCS still insists they took action as a means to mitigate the spread of COVID-19.

“This significant action is being taken in response to a growing number of COVID-19 cases in local jails over the past few days and weeks,” they wrote in a statement.

“Our top priority remains the public health and safety of New Yorkers during this global public health emergency, and this measure will further protect a vulnerable population from contracting and transmitting this infectious disease.”

No, it’s an over-reaction and a very ill-advised and ill-researched move in trying to placate the Governor.

Will the media continue to report on Cuomo’s leadership and preparedness in a positive light considering this news?

Note: After an outcry from town leaders, four of the convicted sex offenders who were released from jail and placed at a Greece hotel have been moved to other locations.