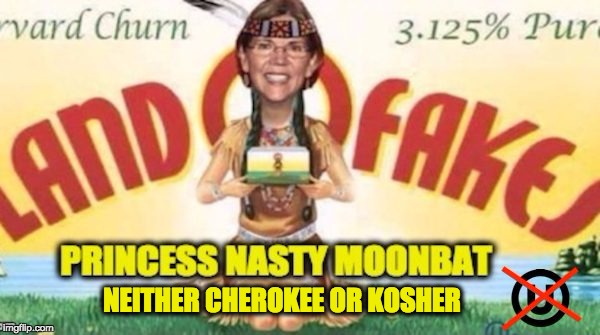 By  Andrew West  and Jeff Dunetz

If Ivanka Trump was a Democrat and Sen. Pocahontas Warren a Republican, the liberals would be screaming that Warren was anti-Semitic for her ad hominem attack on Ivanka Trump. But the liberals would never accuse her of anything, they even ignore her faking a Native-American background to get into Harvard. Pocahontas is a favorite of the radical left that runs the Democratic Party.

Donald Trump’s presidency has been unorthodox through the first few months, but with astounding results to match, few are complaining. Except, of course, those who love the fake-Pocahontas, those who just happen to reside on the left side of American politics, spurred on by their leadership’s appalling lack of decorum in the wake of Trump’s resounding victory and the subsequent shaming of career corruption artist Hillary Clinton.  Now that Trump has brought daughter Ivanka on board to assist in some duties at The White House, these same leftist goons are losing their ever-loving minds at the President’s daughter, a nice Jewish girl.

“Sen. Elizabeth Warren, D-Mass., admits she is confused about Ivanka Trump’s role in her father’s administration, and wants the Office of Government Ethics to straighten things out.

“’We write today to request information about the ethics rules that President Trump’s daughter, Ivanka Trump, will be required to comply with, or has indicated she will voluntarily comply with, in her role as an adviser to the president,’ they wrote.

“Although Ivanka Trump acted in January to step away from her position with the Trump Organization and her brand of high-end fashion items, Warren said she needs to know how the ethics office will make sure the president’s daughter complies with ethics rules and who will take disciplinary action against her if she does not.”

I can’t remember the pseudo-Cherokee ever saying that Valerie Jarrett’s position in the Obama administration was confusing. Of course Jarrett was born in Iran, and helped Obama with his Iran deal, and when she grew up became a Chicago slumlord–that wasn’t to be questioned.  On the other hand Ivanka’s background is suspect.  She ran a clothing company, fought for woman’s rights and after she converted became an observant Joooo.

Warren who represents the lunatic bloc of the Democratic party, is not doing well in recent reelection polls. And the Democratic party was thoroughly rejected by the American people during this populist wave, and are very likely grasping at straws in a lame attempt to create the appearance of untoward nepotism – an attack that will surely fall flat as citizens of this great nation have been keen to the tricks of the left for months now.

UPDATE: Possibly because she is fearful of the crazy Senator Pocahontas Warren tracking her with a bow and arrow, Ivanka Trump released a statement on Wednesday that said in part:

“I have heard the concerns some have with my advising the president in my personal capacity while voluntarily complying with all ethics rules and I will instead serve as an unpaid employee in the White House Office, subject to all of the same rules as other federal employees,”

“Throughout this process, I have been working closely and in good faith with the White House Counsel and my personal counsel to address the unprecedented nature of my role.”