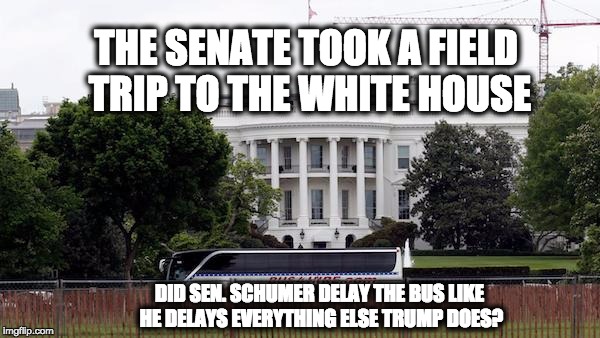 It was like a field trip for the U.S. Senate. All 100 Senators…even the master of obstruction Chuck Schumer (D-NY),  got on two buses and headed to the White House grounds to meet with the administration for a briefing on the building tensions with North Korea and its chubby despot, the diminutive Kim Jong Un. Milk and cookies probably weren’t served on the field trip because if they were Sen. Schumer would have condemned the choice of brands.

Also not known if Sen. Graham (R-SC) got his chosen seat on the bus next to his “controller” Sen. McCain (R-AZ).

The briefing presented by the Trump administration represented a nearly unprecedented meeting between the White House and the entire U.S. Senate. The senators were invited at the invitation of President Donald Trump after Senate Majority Leader Mitch McConnell (R-KY) requested a briefing.

One takeaway  from that meeting was  Things are getting serious.

“Sen. Marco Rubio (R-FL) called it an ‘important’ meeting. ‘We will never accept North Korea as a legitimate nuclear weapons power,’ he tweeted.

“‘Today, along with Chairman of the Joint Chiefs of Staff Gen. Joe Dunford, we briefed members of Congress on the review. The president’s approach aims to pressure North Korea into dismantling its nuclear, ballistic missile, and proliferation programs by tightening economic sanctions and pursuing diplomatic measures with our allies and regional partners.’

“The statement said the administration is ‘engaging responsible members of the international community’ – a veiled reference to China – to increase pressure on North Korea to de-escalate and return to the ‘path of dialogue.’”

Sen. Cory Gardner (R-CO) explained that another takeaway from the meeting was that “we are a long ways away from exercising all of our options on the diplomatic side. “There were great questions within the briefing from both sides of the aisles,” Gardner said. “It shows how important this issue is, to have that team assembled to talk about this and make sure North Korea knows they won’t get away with this.”

“I don’t want to get into the details of the briefing itself, but I think it’s clear that they are going to take more steps, and steps to pressure China as well as others in the region, to get the results we need, which is peaceful denuclearization,” Gardner noted.

Senator Ted Cruz added that he was “cautiously optimistic that we are seeing early signs that China is helping and cooperating and reining in North Korea. … Time will tell.”

The specifics of course cannot be shared with those of us that don’t have security clearance. But one thing is for sure, the North Korea issue is finally getting some attention rather than being kicked down the road as it has been done since Bubba Clinton for president. And for the first time China seems to be acting, \at least for now…I don’t think that North Korea’s short chubby little tyrant expected that.

Indeed most Americans haven’t expected what has come from President Trump in the area of foreign policy, any fair observer should be pleasantly surprised, ho the Trump foreign policy/national security team is handling the foreign crises hitting this nascent administration.