Sen. Ted Cruz On Developing Iran Deal, ‘We Are At A Moment Like Munich In 1938’ 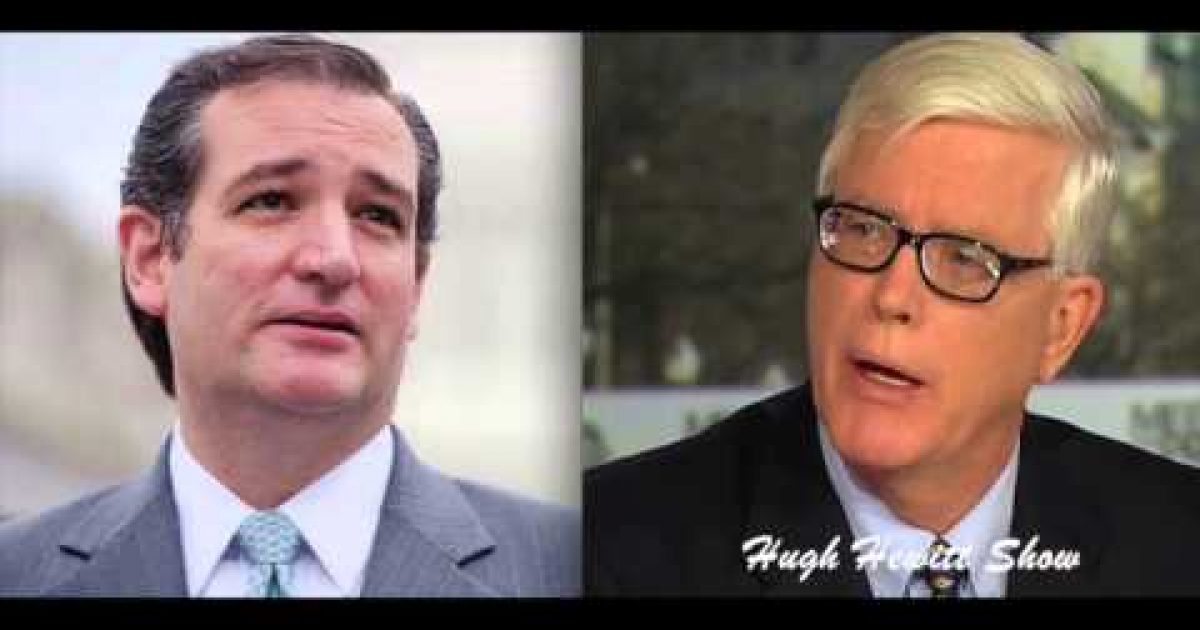 Senator Ted Cruz was on Wednesday’s Hugh Hewitt Show to discuss the deal Obama and his cronies are working out with Iran. Cruz was effusive in his praise for last week’s speech by Israeli Prime Minister Binyamin Netanyahu, and warned about the sell out deal being worked out between the Obama White House and the terrorist supporting Iran,” I  believe we are hearing echoes
of history. I believe we are at a moment like Munich in 1938″

Below is a transcript and audio of Cruz’s segment:

Hewitt: Well, I’ve got to say, I had Leslie Gelb on in the first hour, because he wrote this Daily Beast column calling you and the 46 other Senators who signed on to the Cotton letter has having engaged in an act of “near treachery.” What do you think of that?

Cruz: You know, I think it is revealing that the Obama administration and its defenders cannot defend the substance of this foolhardy deal with Iran. And so they’re doing everything they can to distract from it. Last week, all they could discuss was Prime Minister Netanyahu’s speech, and their perceived myths of protocol. This week, all they can discuss is the letter, because they cannot defend on substance a deal that will lead inexorably to Iran acquiring nuclear weapons, which poses an enormous threat, the single greatest threat to America’s national security, of anything on the globe.

Hewitt: Is the agreement being contemplated, in your view, as catastrophic as the 1994 deal has proven to be with North Korea, or perhaps even as bad as the Munich agreement of 1938, about which Churchill said you could choose between war and dishonor, you chose dishonor, you will have war?

Cruz: Well, Hugh, I think both analogs are powerfully on point. I believe we are hearing echoes of history. I believe we are at a moment like Munich in 1938. And indeed, Prime Minister Netanyahu’s address to Congress last week was Churchillian in its clarity and moral gravity. Likewise, I think you’re exactly right that we are repeating the mistakes of the Clinton administration in the 1990s with respect to North Korea. In the 1990s, the Clinton administration led the world in relaxing sanctions on North Korea. Billions of dollars flowed into North Korea, and they used that money to develop nuclear weapons. In this instance, it’s actually stunning and highly revealing. The Obama administration reached back in history and recruited the very person who led the failed North Korea talks, Wendy Sherman, to be our lead negotiator with Iran. And I must say, to her credit, she is negotiating the exact same failed deal that she negotiated with North Korea. But in this instance, it’s far more dangerous. North Korea, Kim Jung Il, Kim Jung Un, are both radical, extreme, unpredictable, but fundamentally megalomaniacal narcissists, which means with both father and son, some degree of rational deterrence is possible. Both father and son understood that if they ever used a nuclear weapon, that day their regime would end. The problem with Iran, it is led by theocratic zealots who glorify death and suicide, and my view, if the Ayatollah Khamenei acquired a nuclear weapon, the odds are unacceptably high he would use that nuclear weapon either in the skies of Tel Aviv or New York or Los Angeles. And we should not be willing to risk that global cataclysm.