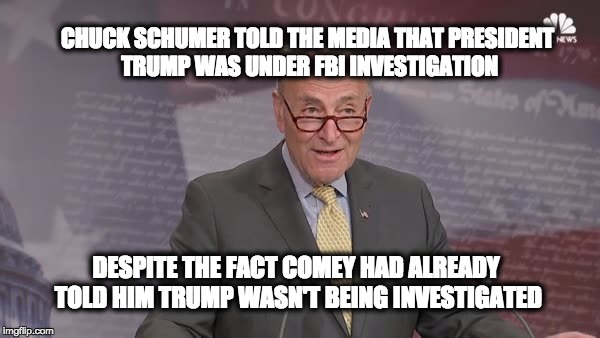 On Thursday Sen. Chuck Grassley (R-IA) accused Senate Minority leader and fellow “Chuck,” Sen. Schumer (D-NY) of lying in a blatant attempt to smear President Trump. The NY Democrat kept opining that the President was under investigation by the FBI when Schumer had already been informed that Trump was NOT being investigated.

The gang of eight is comprised of the two most senior members of each party in each house of Congress.

Byron York has the timeline at the Washington Examiner:

The same day Comey testified, March 20, Grassley tweeted, “FBI Dir Comey needs to be transparent + tell the public what he told me about whether he is or is not investigating @POTUS.” And what Comey told Grassley, of course, was that Trump was not under investigation.

But then the next day, March 21, Schumer, who had been briefed by Comey on March 9 that the president was not under investigation, took to the floor of the Senate. He called on lawmakers to delay the confirmation of Supreme Court nominee Neil Gorsuch until the Russia matter was resolved. Republicans held up former President Barack Obama’s court choice for nearly a year, Schumer said, but “are now rushing to fill the seat for a president whose campaign is under investigation by the FBI.”

Schumer appeared to be speaking carefully; he said Trump’s campaign was under investigation. But then he became much less careful with his words. “You can bet if the shoe were on the other foot and a Democratic president was under investigation by the FBI, the Republicans would be howling at the moon about filling a Supreme Court seat in such circumstances,” Schumer said.

“After all, they stopped the president who was not under investigation from filling a set with nearly a year left in his presidency,” Schumer continued. “It is unseemly to be moving forward so fast on confirming a Supreme Court Justice with a lifetime appointment while this ‘big gray cloud’ of an FBI investigation hangs over the presidency.”

Schumer’s point was entirely clear: President Trump was under investigation. Of course, Comey told Schumer less than two weeks earlier that was not the case.

A week later, Comey again met with President Trump (on March 30) and for the 3rd time reiterated that he was NOT under FBI investigation while also confirming that this was exactly what he told Congressional leaders 10 days earlier.

At this point, everyone in Washington, D.C. knows that the FBI is not investigating President Trump but for some reason all of the Democrats continue to imply that the President MIGHT be under investigation. As proved above Schumer even LIES outright to the American people and says, “You can bet if the shoe were on the other foot and a Democratic president was under investigation by the FBI, the Republicans would be howling at the moon about filling a Supreme Court seat in such circumstances.” The only problem? The American people hadn’t been filled in on the circumstances so we were all still wondering if the President was indeed under investigation.

Chuck Schumer proved months ago that he didn’t care about NY State or the United States, he only cared about his party. But until now his list of Senatorial malfeasance only consisted of hypocrisy and political maneuvering to slow things down. But now we know he uses blatant lying to slander the President and divide the country.

Of course the media doesn’t care. Have you heard anyone in the mainstream media confront Schumer for his lies? Have you heard any journalists or TV show host ask Schumer this directly, “You found out that Trump was NOT under investigation on March 9th, so why did you pretend that he was on March 20th? Do you think it’s okay to lie to the American people because you don’t like the President?”

No I haven’t seen anybody ask those question.

Some of this post was originally seen at Constitution.com