Proof Sen. Schumer’s Attack On AG Sessions Is ALL About Party Politics 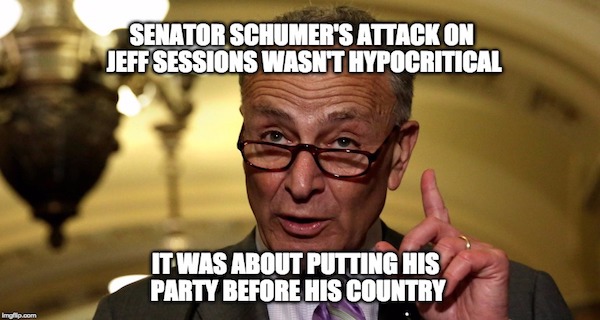 This morning Senate Minority leader, NY Senator Chuck Schumer called senator and current Attorney General Jeff Sessions for being literal and failing to tell a Senate panel that he met with the Russian ambassador twice in 2016.  And while the AG announced he would recuse himself from the investigation, it should be noted that Sen. Schumer’s demand was entirely political and a continuation of his campaign to de-legitimize the Trump administration.

Democrats such as Sen. Claire McCaskill and former Attorney General Lynch avoided the wrath of Sen. Schumer for similar violations as Sessions. And while McCaskell’s mistaken claim about not meeting the Russian ambassador may be considered minor, Lynch’s secret meeting with former president Clinton was serious.  When the Bubba/Lynch meeting was revealed, even before there was any investigation of the meeting, Sen Schumer said there was nothing to the meeting and that he believed Lynch–no call for recusal, resignation, or special prosecutor.

If she was going to take to Twitter with her j’accuse, maybe McCaskill should have been more circumspect about her tweeting history. If she had glanced through her past tweets, she might have recalled posting this one in 2013:

Claire McCaskill lied to the American people today, why isn’t Senator Schumer calling for her to resign?

Senator Sessions did the right thing today, he recused himself to avoid even the suspicion of a conflict. Apparently he had been talking to his staff about it for over a week.

On the other hand why didn’t Senator Schumer call for AG Lynch to do that when she had that secret meeting on an airport tarmac with former president Bubba Clinton, a week before the FBI revealed that they would not be prosecuting former secretary of state Clinton.

On June 27th, 2016 Lynch held meeting with former President Bill Clinton on her private airplane on the tarmac of the Phoenix Sky Harbor International Airport.The American public might not even know about the meeting if it weren’t for local Phoenix reporter Christopher Sign spotting Clinton exiting his own jet. Interestingly Sign also reported that the FBI tried to keep the meeting secret. “The FBI there on the tarmac instructing everybody around ‘no photos, no pictures, no cell phones,’”

Unlike Sessions, AG Lynch never recused herself from the Hillary Clinton investigation. Soon after her meeting with the former President, the FBI and Justice Department agreed no charges should be brought against former Secretary of State Hillary Clinton.

As you can see on the video below, despite the news of the meeting and the FBI demanding “‘no photos, no pictures, no cell phones,” on Thursday the 30th Senator Schumer told America that there was no need to do anything about the Lynch/Clinton meeting because he believed her. Why would he act one way with Senator Sessions and a different way for McCaskill’s error and Lynch’s meeting combined with what seemed enough like a cover-up to call Lynch to recuse herself? The answer is obvious, McCaskill and Lynch are Democrats while sessions is a Republican who works for a Republican President.

Sadly ever since President Trump took office Senator Schumer has been trying to undermine the nascent administration rather than trying to negotiate with the administration and find a compromise. It’s not just that he has slow walked each and every one of the President’s Cabinet appointees, but he did it with nasty personal attacks.

The same with Trump’s programs. Senator Schumer was on the senate floor blasting President Trump’s speech and programs earlier this week, before the president made the speech and outlined his programs. The NY Senator doesn’t seem to give a rats arse about the future of America, instead he is acting like a petulant child throwing a tantrum because Hillary Clinton lost.