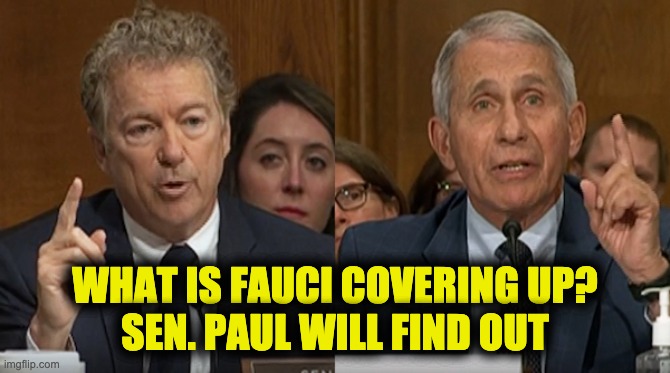 As the coronavirus crisis continues to evolve here in the United States, many among us are getting more than a little bit frazzled.  We’re 16 months into a “two-week lockdown,” having flattened and un-flattened “the curve” more times than we’d like to admit. So naturally, tempers are going to begin to flare. And as usual, when Dr. Fauci testifies to the senate he got exposed by Doctor and Senator Rand Paul. Sen. Paul destroys Fauci

The latest COVID-19 dust-up comes to us from Congress, where Dr. Anthony Fauci and Senator Rand Paul got into it.

Sen. Rand Paul (R-KY) grilled Dr. Anthony Fauci during a hearing on the Chinese coronavirus Tuesday over his prior claim that the National Institutes of Health (NIH) has never funded gain-of-function research in the Wuhan Institute of Virology.

Paul’s presentation triggered President Biden’s chief medical adviser, who refused to retract his May 11 statement and instead snapped at the Kentucky senator, brazenly telling Paul, “you do not know what you are talking about.”

“Dr. Fauci, as you are aware it is a crime to lie to Congress,” Paul began during the Senate Committee on Health, Education, Labor & Pensions hearing Tuesday, reminding Fauci of his previous remarks to the committee on May 11th, during which the National Institute of Allergy and Infectious Diseases (NIAID) director stated that the NIH has not ever and does not now fund gain of function research in the Wuhan Institute of Virology.

“And yet, gain-of-function research was done entirely in the Wuhan Institute … and was funded by the NIH,” Paul said, citing Wuhan Virology paper entitled, “Discovery of a Rich Gene Pool of Bat SARS-Related Coronaviruses.”

Then came the fireworks:

“Senator Paul, I have never lied before the Congress and I do not retract that statement. This paper that you were referring to was judged by qualified staff up and down the chain as not being gain 0f function — let me finish!” he said as Paul interjected.

“You take an animal virus and you increase this transmissibility to humans, you’re saying that’s not gain of function?” Paul asked.

“It is not,” Fauci said as Paul continued.

“It’s a dance, and you’re dancing around this because you’re trying to obscure responsibility for four million people dying around the world from a pandemic,” Paul added.

Video of the incident was available online.

Fauci and Paul have gone back and forth several times on the subject of the coronavirus, but things had never gotten this heated previously.