Sen. John McCain: On ISIS Obama Is A Classic Example Of Delusion 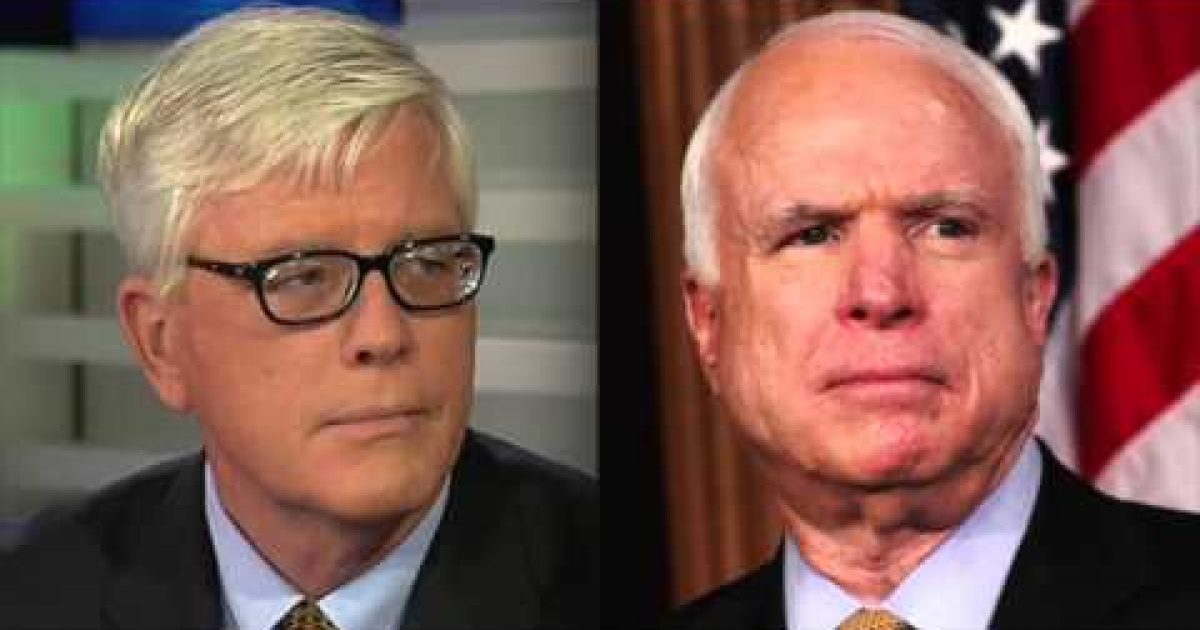 Regular readers of this site know that in general I am not a big fan of Senator McCain, partly because he is always attacking the Republicans whose views are more conservative than his, partly because he sired that obnoxious daughter who believes she is a real Republican, partially because he fought too nice against Obama in 2008, and most importantly partly because I have nightmares of the guy running after me with a 12 gauge screaming at me to get off his property.

On the other hand one thing McCain knows is national security and that was the crux of his discussion he had on the Hugh Hewitt Show where he condemned Obama’s ISIS policy as delusional.

Hewitt: Senator McCain, you join me in condemning domestic terrorists and racists. We’ve had one of those. He murdered nine innocent people. Lindsey Graham was on the show speaking eloquently about that last week. But what is the President, is he out of his mind? They are killing by the thousands of people in Iraq and Syria, and soon Libya and Jordan.


McCain: You know, I don’t like to analyze people’s psychology, but the fact is the President came to the presidency to get us out of conflict no matter what. He didn’t, what he didn’t understand is that just because we leave does not only mean that the conflict doesn’t end, but it escalates. The classic example, of course, is leaving Iraq without a residual force after the sacrifice of thousands of young Americans. We had it won. It was won. And he pulled everybody out, and unfortunately, Lindsey and I predicted, and Joe Lieberman predicted exactly what was going to happen. I mean, the classic example is delusion. He said there have been five thousand sortees. Did you hear that quote?

McCain: Do you know what percentage of them returns without dropping a weapon?


Hewitt: So there have been, really, 1,250 bomb dropping sortees.

McCain: And I guess the other sortees are to damage people’s hearing. I don’t know else that flying over them…and the fact that he pointed out that we have succeeded in regaining some territory? They still control the second-largest city in Iraq.

Hewitt: Well, here’s what he said, Senator. Let me play for you his rebuke to you, cut number four.


Obama (on tape): Ideologies are not defeated with guns. They’re defeated by other ideas, a more attractive and compelling vision. So the United States will continue to do our part by working with partners to counter ISIL’s hateful propaganda, especially online. We’ll constantly reaffirm through words and deeds that we will never be at war with Islam. We’re fighting terrorists who distort Islam and whose victims are mostly Muslims.

Hewitt: Don’t you, you know, I’m thinking of the Korean War and the Vietnam War in which you were a prisoner of war, Senator, and I’m thinking about Stalin and Hitler. And it would have been news to them that ideologies can’t be defeated by guns.

McCain: And again, the delusion here that somehow this is just simply something that we can win by having nice programs and have Islamic clerics condemn them, and all that would be good, but first, you have to defeat them on the battlefield. Then all the rest of that follows. I mean, there’s no doubt there’s ideological struggle here. There’s no doubt there’s an economic problem in those places in a world where they have gigantic youth unemployment. All of those things are correct. But as, I guess it was Bismarck, the issue will be decided by blood and steel.

Hewitt: Yeah, you used the word delusion. That’s a strong word, Senator. You standing by that word, delusion?

McCain: Here’s the delusion. The delusion is going on right now in these negotiations with Iran, that somehow they will consummate a nuclear deal, no matter how back, with Iran. And Iran will now be our partner. You know, in, we are now training young men outside Syria to go back into Syria and fight against ISIS, and not protect them against Bashar Assad’s barrel bombing, this atrocious weapon that slaughters men, women and children. They are having to take an oath that only they will fight against ISIS and not against the guy that’s killed 230,000 of their countrymen and women? I mean, that’s what I call delusion. What do you call it, Hugh?

Hewitt: I agree with you, Senator McCain. Come back early and often, and good luck in the reelection campaign. It’s always a pleasure to talk to you, John McCain.