Sen. Feinstein Made Herself Look Like Clown With Kavanaugh Ploy 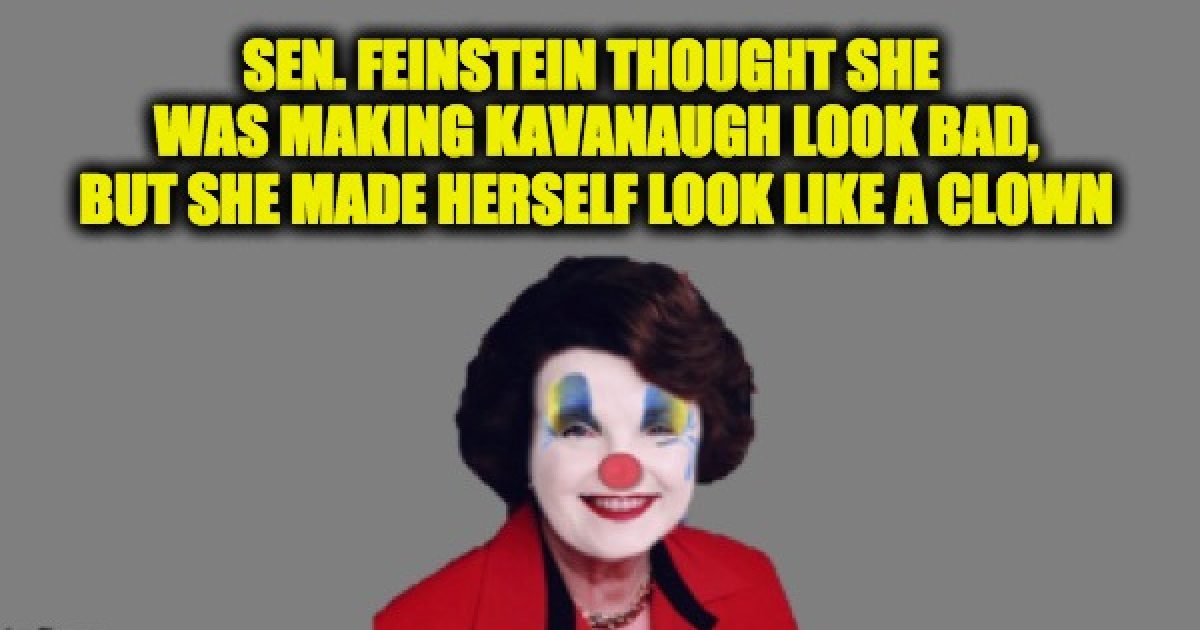 After a week of lies, biased editing of his statements, and one fake Spartacus imitation, supreme court nominee, Brett Kavanaugh was unscathed by the left and looked to be on his way to being confirmed by the entire Senate. But the left demanded that the Democrats do something to prevent Kavanaugh from the inevitable approval.

Therefore, Sen. Feinstein  (D-CA) who despite being a leftist has problems with the far-left wing of her party tried a last-minute ploy to scuttle the nomination of Brett Kavanaugh that failed so miserably it ended \up making herself look like the court jester.

I have received information from an individual concerning the nomination of Brett Kavanaugh to the Supreme Court,” Feinstein said in her surprise statement. “That individual strongly requested confidentiality, declined to come forward or press the matter further, and I have honored that decision. I have, however, referred the matter to federal investigative authorities.”

As the day went on Feinstein’s tale began to fall apart. It started to leak out that the letter described allegations of sexual misconduct involving Supreme Court nominee Brett Kavanaugh and a woman — when they were both high school students.  Perhaps the woman got a sex change since then because Kavanaugh went to Georgetown Prep is an all-boys boarding school in Bethesda, Maryland.

But the Guardian claims it happened off campus:

A source who said they were briefed on the contents of the letter said it described an incident involving Kavanaugh and a woman that took place when both were 17 years old and at a party. According to the source, Kavanaugh and a male friend had locked her in a room against her will, making her feel threatened, but she was able to get out of the room. The Guardian has not verified the apparent claims in the letter. It is not yet clear who wrote it.

Making Feinstein look a bit more foolish, the New York Times reported that the Senator has been holding on to the letter for two months, but didn’t let anyone know about it till Kavanaugh was about to be voted on by the entire Judicial Committee:

The information came in July in a letter, which was first sent to the office of Representative Anna Eshoo, Democrat of California, and accuses the judge of sexual misconduct toward the letter’s author, a person familiar with the letter confirmed. Ms. Feinstein, who received the letter from Ms. Eshoo’s office, informed fellow Democrats on the Judiciary Committee about its existence and its contents on Wednesday evening but did not share the letter itself.

Before we go on ponder this for a moment; Kavanaugh worked for Ken Starr. He then worked in the Bush White House, and first nominated to the appellate bench in 2003. Each of those times he received an extensive FBI background check and had another one when he was nominated to join the Supremes.  Now this supposed incident has been sitting out there for 36 years, and the FBI never found it? And the victim was silent until two weeks ago?  Kind of makes one believe the story is bogus. The FBI thought so also.

Finally, the FBI must have decided that Diane Feinstein didn’t look foolish enough.  A person familiar to the matter (i.e., another leaker) told the Washington Post that

the FBI does not now plan to launch a criminal investigation of the matter, which would normally be handled by local authorities if it was within the statute of limitations. The FBI instead passed the material to the White House, as an update to Kavanaugh’s background check, which already had been completed, the person said. The move is similar to what the bureau did when allegations were leveled against former White House aide Rob Porter.

An FBI official said, “Upon receipt of the information on the night of September 12, we included it as part of Judge Kavanaugh’s background file, as per the standard process.”

So the FBI doesn’t believe that there’s a “there” there. And now the White House has the info but Feinstein’s Democratic partners, many of whom wanted her to just release the letter, don’t know what’s in it.

The bottom line is  Sen. Feinstein floated a tale at the last minute in an attempt to derail the Kavanaugh nomination. The story was worse than the usual MSM anonymous story because not only don’t we know who the accuser is, but we aren’t being told the details of her accusation. And the FBI believes it’s a load of cow chips, so they aren’t investigating it.