Sen. Cotton: Anybody Who Votes For Iran Deal Puts Their Political Career In Hands Of Ayatollah 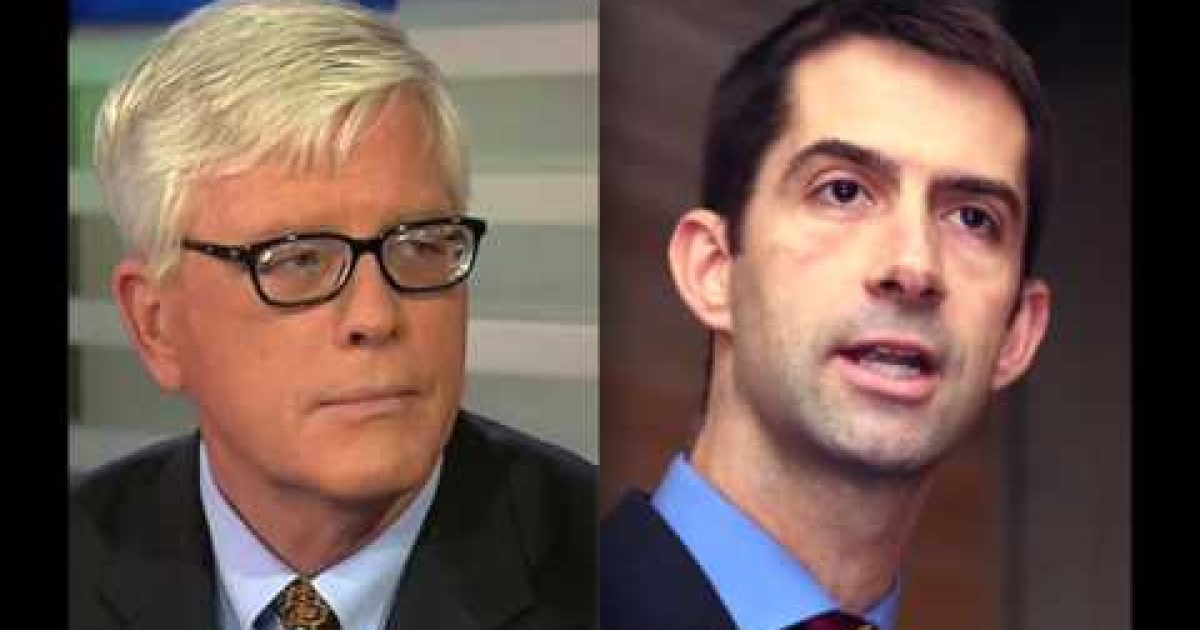 Senator Tom Cotton was a guest on Monday’s Hugh Hewitt Show to discuss the impending disastrous nuclear deal with Iran. The two laid out the procedure the deal will have to go through in to get disproved in Congress. They agreed (and I agree with them) that the Senate should vote first because it will be harder to get a two thirds majority in the house.

Cotton however had a warning for his fellow members of congress:

You should also think about the political consequences of this vote, because I can assure you Senators and Congressmen are thinking about it. This is not just any old vote. This is not like a vote for, say, higher taxes, or Democrats, you know, you wanted a little bit more money coming into the government, you’re going to face an attack ad or two next year, and then it’s all going to be water under the bridge. Any Congressman or Senator who votes for this deal is voting to put their political fate in the hands of the Ayatollah for the rest of his or her life in the public spotlight, because if Iran gets a nuclear weapon in a year, or five years, or ten years, the American people will want to know who supported the deal that gave them that nuclear weapon.

Below you will find a transcript of the entire Cotton segment and an audio of two very relevant segments:

Hewitt: So given that background, my conversation with Bill Kristol which began the show comes to the foreground. He is very concerned, that I am, that the Iranian deal is being eclipsed by a variety of political stories. Scott Walker announced today. Donald Trump’s getting big crowds. Hillary Clinton gave an empty, vacuous speech. We have this terrorism report. But the Iranian deal is being born. It’s a long labor, but it’s being born, and it’s a terrible deal.

Cotton: The potential Iran deal that is still under negotiation at this moment, I believe, would be dangerous to the United States and dangerous to the world. It has the possibility of defining the course of history for the next several decades, if not for this entire century. And for that reason, I do not expect it’s going to be buried, Hugh. I expect it’ll be front and center for weeks as the American people begin to realize just how far President Obama has gone from his initial negotiating position, which is Iran had to dismantle its nuclear weapons program. Now, we’re simply managing the time it will take them to get a nuclear weapon. At the same time, we’re going to give the world’s leading sponsor of terrorism, a country whose president, supposedly moderate president, was in the streets with his followers chanting death to America, death to Israel, and burning the American flag and the Israeli flag just on Friday. We’re going to give them tens of billions of dollars in sanctions relief, and we may even lift a conventional arms embargo. What do you think they’re going to do with all that money if they’re demanding the arms embargo be lifted?

Hewitt: Now Senator Cotton, I argued earlier with David Drucker, and I don’t know what day of the week do the Senate Republicans get together?

Hewitt: All right, so I’m hoping you’ll make this argument, or somebody will. It’s important that the debate begin in the Senate, not in the House, because it’s a harder vote for Senators to vote in favor of this deal, and Kristol and I both agreed it ought to be up or down. It ought to be framed are you for it or against it, so that a yes vote means yes to Iran, and a no vote means no to Iran, but that it start in the Senate, not in the House, because it’s easier for Democrats in gerrymandered districts to vote for this thing. It’s harder for Senators to do so. Do you think it will start in the Senate?

Cotton: I suspect we’ll take up consideration promptly in the Senate, Hugh, but you should also think about the political consequences of this vote, because I can assure you Senators and Congressmen are thinking about it. This is not just any old vote. This is not like a vote for, say, higher taxes, or Democrats, you know, you wanted a little bit more money coming into the government, you’re going to face an attack ad or two next year, and then it’s all going to be water under the bridge. Any Congressman or Senator who votes for this deal is voting to put their political fate in the hands of the Ayatollah for the rest of his or her life in the public spotlight, because if Iran gets a nuclear weapon in a year, or five years, or ten years, the American people will want to know who supported the deal that gave them that nuclear weapon. And they will hold that person accountable. So that’s what every Democrat Congressman and Senator is going to be thinking about when they present this very dangerous deal to the Congress that they reach in Vienna.

Hewitt: I also add former Israeli Ambassador to the United States, now member of the Knesset, Michael Oren on this show two weeks ago. He pointed out Hezbollah requires a lot of money from Iran. They have tens of thousands of missiles. If you vote for $140 billion dollars in sanctions relief, and that’s the number bill Kristol used, and I assume he knows what he’s talking about on this, you’re actually arming Iran. And I had a sailor call up, an officer, said that’s more than the budget of our entire Army, Navy and Air Force, and everything that we build in on year. It’s the, giving them $140 billion dollars is insane.

Cotton: Well, there’s no doubt, Hugh, that $140 billion dollars, by some estimates, what Iran would receive as a signing bonus, is an enormous amount of money. And even if you assume, as the administration argues, that they will spend some of that money on domestic needs, it is more than enough money to continue to support Hezbollah in Lebanon, to support the Houthis in Yemen, Shiite militias which are tearing Iraq apart, and of course the Assad regime, because just consider this, Hugh. They are still under some sanctions, that they just signed a new billion dollar support agreement with Assad. They even signed a $500 million dollar agreement with the government of Venezuela. They don’t exactly have long-standing historical or cultural ties with the Venezuelans. But it does fall into their strategy of fomenting anti-Americanism around the world. And if they have the money to do that now, just think what they’ll do when they have $140 billion dollars.

Hewitt: Without naming any names, are any of your Democratic colleagues open to argument on this?

Cotton: Without question, Hugh, I think you see many Democrats who are beginning to get very cold feet about this deal, again, because the President has gone so far away from his opening position. He’s completely abandoned his position that Iran would have to dismantle its nuclear weapons program before the West would dismantle sanctions. Iran is going to get to keep their enrichment capability, they’re going to get to keep their enriched uranium. They keep their underground, fortified bunker. They’re going to get tens of billions, if not over a hundred billion dollars in sanctions relief. Now, we may even lift the conventional arms embargo. And what does the United States get in return? All they get is a promise from Iran. Nothing more.

Hewitt: So if the deal is signed tomorrow, do you have 58 days to defeat it? What’s the clock? And we have a minute, Senator Cotton.

Cotton: So if the deal is submitted to Congress between now and early September, there will be 60 days for the Congress to pass a resolution of approval or disapproval. I believe we will be able to pass a resolution of disapproval is the deal looks anything like what is being reported in the press now. At that point, there’s approximately three weeks for the President to sign or veto that resolution, and for the Congress to override it.

Hewitt: You mean a resolution of disapproval would pass, did you say?

Cotton: I believe a resolution of disapproval will pass the Congress. And if Iran gets $140 billion dollar signing bonus, or for that matter, anything more than one dollar, and there is not an ironclad commitment by the President not to alter the arms embargo, I believe that you’ll see a veto-proof majority and a Congressional rebellion.

Hewitt: And do people need to start working the phones now to vote yes on no?

Cotton: Absolutely. Every American who does not want Iran to get a nuclear weapon should be calling their Senator and Congressman.