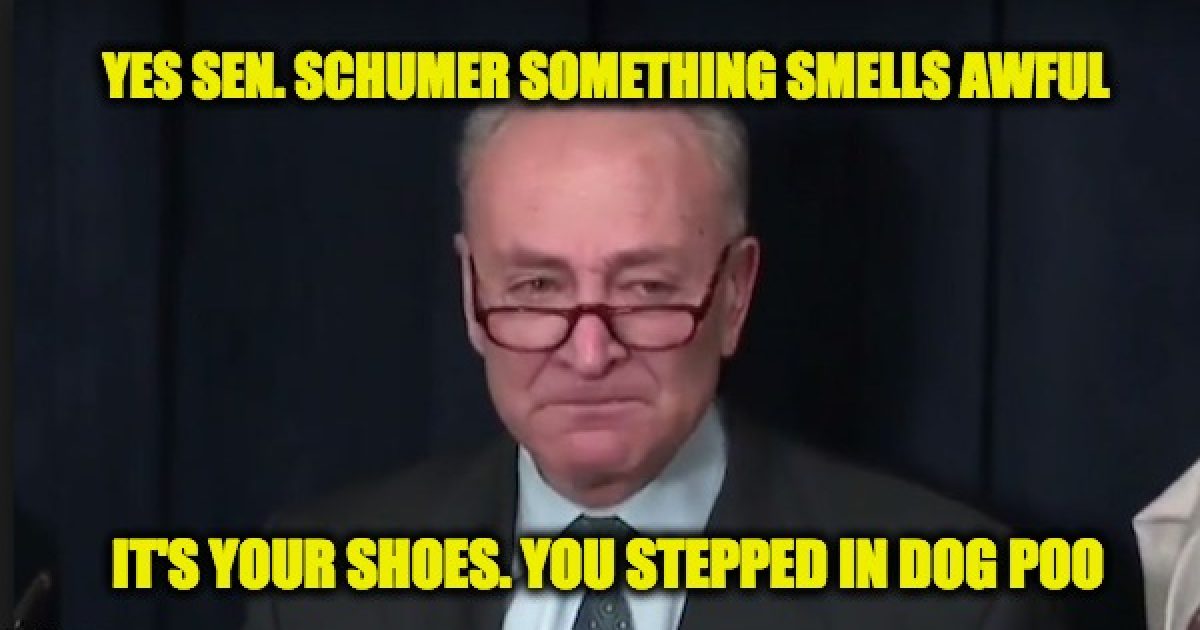 Senate minority leader Chuck Schumer never met a GOP program he liked. I do believe if President Trump found a way to end all war, Schumer would complain that not enough people were dying and the earth was getting too crowded. Most of the time he flies off the handle to criticize a bill, speech or policy before it’s been written.

He’s been a big opponent the tax plan going with the standard liberal argument that every tax cut ever done favors the rich and doesn’t help the economy. Of course, he is ignoring the tax cut pushed by John F. Kennedy and the one by Ronald Reagan, each brought a period of prosperity to the economy.

As his usual habit, immediately after the House voted a second time to approve the tax bill, he didn’t wait to start criticizing. And that was his big mistake. Schumer found a TV camera and started bloviating, and that when he soiled his shoes with doggy turds.   He started to attack the bill and denied that corporations would use the tax saving to increase salaries or hire more people. And as an example, he singled out AT&T

“I love the example of AT&T. Over the last ten years, AT&T has paid an average tax rate of eight percent a year. They have 80,000 fewer employees today than they had then…Tax breaks don’t lead to job creation,they lead to big CEO salaries and money for the very, very wealthy.”

At around the same time, President Trump was in front of the White House celebrating the passage of the Tax Bill. The POTUS began with the following announcement:

And I know this just came out.  Two minutes ago, they handed it to me.  AT&T plans to increase U.S. capital spending $1 billion and provide $1,000 special bonus to more than 200,000 U.S. employees, and that’s because of what we did.  So that’s pretty good.

Ouch, that had to hurt!

And as if Sen. Schumer’s shoes didn’t reek of doggie-doo enough. USA Today reports that other companies are  joining in on the fun:

Perhaps next time Senator Schumer will realize that he is an American first and a Democrat second and instead of rushing to hate a Republican legislation, he will chill for a while and maybe see if what his political opponents were saying was actually true.

And while you are at it…push up your glasses, you look like a 90-year-old schoolmarm.