If You Sneak Across Southern Border It Seems Okay, But "If You Take To The Sea, You Will Not Come To The United States" 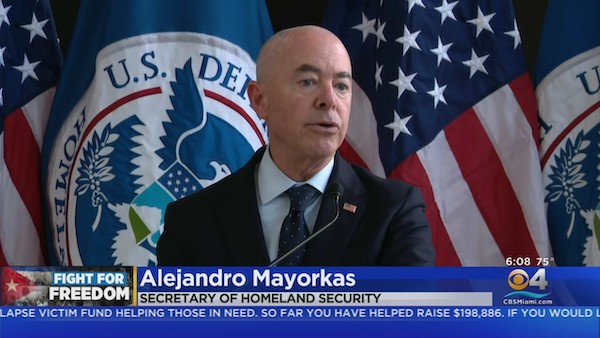 According to the Biden-Harris administration, economic migration is more important than fleeing political turmoil and persecution.

On July 7, Jovenel Moïse, the President of Haiti, was assassinated, and it has been chaos ever since with no clear leadership and rival politicians jockeying for power. Although, things have been rough there for months with a surge in gang violence and kidnappings, violent protests, and a heavy-handed response by the government.

On Sunday, large-scale anti-communist protests in Cuba as the Cuban people demand freedom from the dictatorial regime that has ruled over them for more than six decades.

The push-back in Cuba has been swift and brutal. One man has been confirmed killed, and over 100 people are missing since the protests began.

Videos are circulating about the retaliation that Cuban protesters are facing. It is difficult to confirm the authenticity of the claims due to a social media blackout in Cuba. The videos are often shared through American intermediaries.

I am receiving many videos from contacts in Cuba.

In this one we see state security forces beating and arresting unarmed protestors in Havana.#PatriaYVida #AbajoLaDictadura pic.twitter.com/cY0lhShiUs

One independent journalist was detained by state security while on a live interview.

Independent journalist Dina Stars, who has been covering the protests in Cuba, is detained by state security forces during a live interview on Spanish television. @Dinastars_ @martaflich pic.twitter.com/2b7uQwr5bp

In normal times, the instability caused by the political turmoil would be grounds for refugee or asylum claims.

We do not live in normal times.

Department of Homeland Security Secretary Alejandro Mayorkas said on Tuesday that Cubans or Haitians should not attempt to enter the United States to seek asylum. He warned would-be migrants that the journey by sea is dangerous and “people will die.” He added that even if potential refugees claim that they fear persecution in their home country, they will not enter the United States — they will either be repatriated or referred to other countries for resettlement.

He said the voyage is too dangerous and they will not be allowed to enter.

‘Let me be clear: If you take to the sea, you will not come to the United States,’ Mayorkas said at a news briefing.

Coast Guard officials are monitoring by air and have not seen a surge in migrants since the unrest in Cuba and the assassination of Haiti’s president last week, he said.

U.S. officials were prepared to deal with any surge, he added.
Source: Daily Mail

“The time is never right to attempt migration by sea,” said Mayorkas at the U.S. Coast Guard headquarters in Washington.

“Allow me to be clear. If you take to the sea, you will not come to the United States,” Mayorkas said.

This is very different from the “don’t come yet” that was told to economic migrants making a dangerous trek across the southern border with the assistance of criminal cartels. The southern border migrants were told by Secretary Mayorkas that they needed to wait until the Biden-Harris administration had created “safe, orderly and humane” ways to deal with them. This was reiterated by Biden himself when he said, “Yes, I can say quite clearly: Don’t come [while] we’re in the process of getting set up … don’t leave your town or city or community.” (Emphasis added.)

Not only is the Biden-Harris administration allowing economic migrants to cross the southern border illegally, but they’re also apparently bringing back asylum seekers that were ordered deported under the Trump administration.

It’s strange that people that can walk over the border “seeking a better life” are being accepted but the ones converting Studebakers into boats because they fear political persecution are not.

Maybe if the Cubans and Haitians were wearing “Biden Let Us In” t-shirts, they’d have more of a welcome from the administration. Probably not for the Cuban refugees. After all, it was the Obama administration that ended the “wet foot dry foot” policy as one of the last acts as a “Screw you!” to Republicans in January 2017.

Here’s the interesting tidbit — Alejandro Mayorkas came to the United States from Cuba with his parents after the Communists took over when he was just one year old.

This was pointed out by Desi Cuellar, a Republican and veteran who is challenging Rep. Alexandria Ocasio-Cortez in New York’s 14th Congressional District.

.@SecMayorkas, you should be ashamed of yourself.

You were born in Havana and fled to America as a baby after Castro took over.

You leave our Southern Border open for the drug cartels and human traffickers but tell Cubans that they aren’t welcome to seek asylum in America.

If it’s not the Castros repressing Cubans in Cuba it’s now @SecMayorkas making sure that Cuban refugees stay in Cuba.

I’m sure Fidel Castro is staring up from Hell with pride and gratitude at Alejandro Mayorkas for his service to the regime.

You betrayed your people, man.