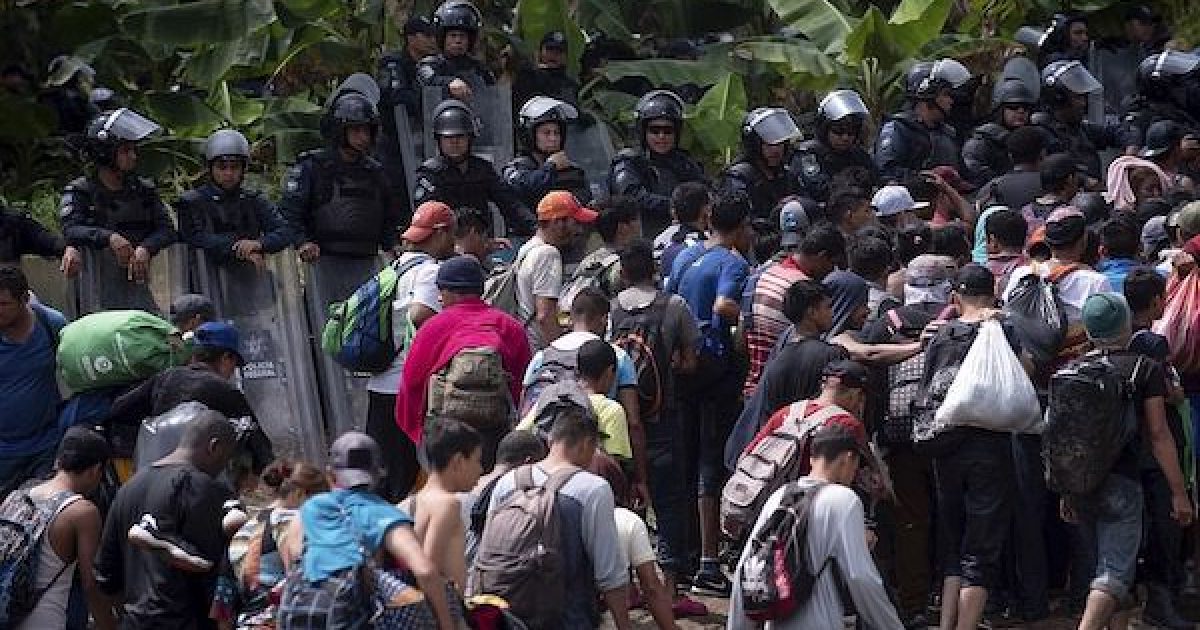 The second caravan of migrants has broken through to Mexico, having crossed a river from Guatemala, and authorities report that some of them are armed with explosives and other weapons.

The Associated Press reports that the mob has been much more unruly than the first with some allegedly carrying weapons and firebombs made from improvised soft-drink bottles and gasoline.

The group has seemingly upgraded their arsenal, having used rocks and sticks against Mexican police over the weekend.

Mexico authorities said migrants attacked its agents with rocks, glass bottles and fireworks when they broke through a gate on the Mexican end but were pushed back, and some allegedly carried guns and firebombs.

Worse, Prida accused the migrants of placing vulnerable individuals – children, the elderly, and pregnant women – at the front of any confrontation with authorities, leaving them more at risk of being crushed.

Some of these people, it would seem, are “bad hombres.”

President Trump spoke about the violence being perpetrated by the migrants at the Mexican border, pointing out that soldiers were hurt during the confrontations.

The Caravans are made up of some very tough fighters and people. Fought back hard and viciously against Mexico at Northern Border before breaking through. Mexican soldiers hurt, were unable, or unwilling to stop Caravan. Should stop them before they reach our Border, but won’t!

Understand that, with over 5,000 troops being deployed at the U.S.-Mexican border, similar confrontations provoked by armed caravan members could result in the same injuries to our very own military men and women.

The President reminded people that the caravans consist of some “very bad thugs and gang members.”

He warned that the only means of crossing the U.S. border are through legal channels, adding that those who don’t wish to follow laws should “turn around.”

Our military is being mobilized at the Southern Border. Many more troops coming. We will NOT let these Caravans, which are also made up of some very bad thugs and gang members, into the U.S. Our Border is sacred, must come in legally. TURN AROUND!

Something to Worry About

Earlier this week, Fox News’s MSNBC wannabe, Shepard Smith declared there was nothing to fear from the unruly mobs heading to the border, mocking President Trump for using viable concerns as a tactic to boost election turnout.

“There is no invasion. No one’s coming to get you,” he condescended. “There’s nothing at all to worry about.”

Shep Smith on the migrant caravan: “There is no invasion. No one is coming to get you. There is nothing at all to worry about.” pic.twitter.com/4dLmPuZem0

Hmm … Armed individuals trying to cross the border seem like something worthy of fretting over. One wonders whether Smith would worry if hundreds of people, some of whom are carrying guns and Molotov cocktails, were to climb the fence around his property.