The Accelerating Growth Of The Second Amendment Sanctuary Movement 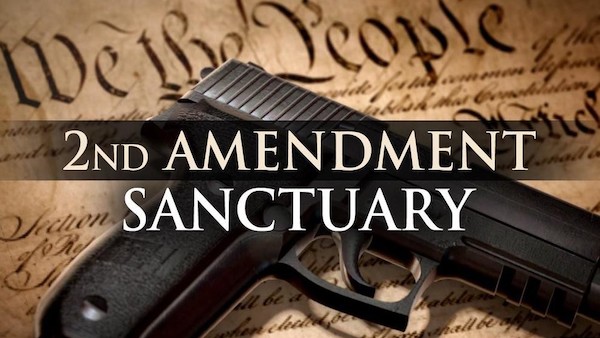 More than a hundred counties, cities, and towns in Virginia have joined the spreading Second Amendment Sanctuary movement as newly-empowered Democrats look to crack down on gun owners.

In Washington, grassroots volunteers are scrambling to fill Initiative 1094 petitions to get on the November ballot. That initiative seeks to repeal gun control Initiative 1639, adopted by voters in 2018.

In Illinois, more than half of the counties have adopted sanctuary resolutions. Ditto in Colorado.

These and other signs—the entire states of Alaska, Idaho Kansas, and Wyoming have “gone sanctuary”—suggest that the long-anticipated “civil war” may have already started. However, it’s a war of words and ideals. No shots have been fired, no state has seceded, but the combined message is simple: Leave our guns and our rights alone. Anti-gunners contend this is nothing more than symbolism, but symbolism can be a powerful political weapon.

Not since the national elections in 1994, when more than 50 members of Congress lost their jobs after voting for the Clinton Crime ban, has there appeared to be a renewed sense of urgency among gun owners. Despite the presence of Donald Trump in the Oval Office making the threat seem diminished, with Democrats now in control of legislatures in both Washington and West Virginia, there appears to be a growing likelihood of legislative confrontations over respective state legislation aimed at gun restrictions.

What is at stake is a flip of the government, from Washington, D.C. on down. The gun prohibition lobby and their allies in government seem determined to whittle away at the right to keep and bear arms, despite Trump’s previously-reported success at changing the federal courts. But, where traditionally lethargic gun owners have allowed such erosion in the past, there has been a serious change, with Virginia providing the most dramatic example.

The rise of the Second Amendment Sanctuary movement seems nothing short of miraculous, from a demographic that has rarely flexed its muscle—which is considerable—outside of national elections. This awakening, as noted by the New York Post, was sparked by the Nov. 5 election results in Virginia, where only about 40 percent of registered voters filled out ballots. That may never happen again, with gun owners, county officials and sheriffs leaving no doubt they will resist new gun control laws and fight the ones now on the books.

Adding fuel to the fire, at least one Democrat congressman from Virginia already suggested that National Guard troops might be called up to enforce new gun control laws. The mere suggestion infuriated Virginia gun owners.

Several days ago, the Second Amendment Foundation and Citizens Committee for the Right to Keep and Bear Arms issued a joint announcement they will support the Second Amendment Sanctuary movement. The Virginia-based National Rifle Association noted, “It is the tyrannical nature of politicians that triggers sanctuary, not the other way around.”

Legislative sessions about to unfold will tell the tale; whether this sudden activism is a flash in the pan or indicative of a more vigorous defense of Second Amendment rights on the horizon. The 2020 campaigns for Congress and the White House, plus state legislatures and even local offices, could be contentious. All signs point in that direction.

Pressing proposals that include background checks for ammunition, proof of training for gun ownership, changing the minimum age to own any kind of firearm, one-gun-per-month restrictions and safe storage mandates may be the proverbial straw that breaks the camel’s back. The trick will be in not allowing it to irreparably tear the country apart.