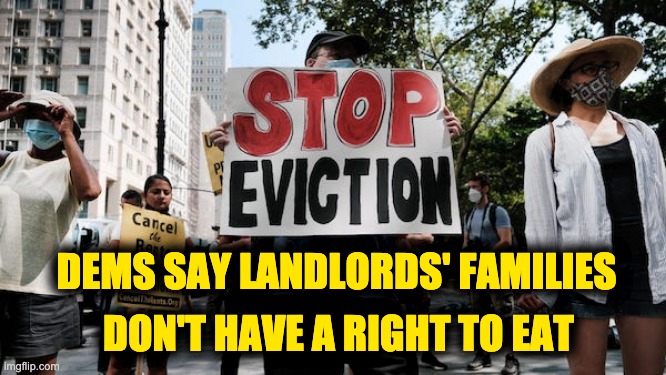 Joe knew his government was exerting power the Constitution didn’t grant.  In fact, Biden publicly said his action was probably unconstitutional. But he went ahead with it anyway … because activists aligned with his party wanted it. SCOTUS eviction moratorium

We all know what the media would be screaming if Trump had passed legislation or given authority for an alphabet agency under his purview to defy SCOTUS and act beyond Constitutional limits. The cries of ‘impeach him’ would have been deafening.

But that never happened. In fact, when Democrats challenged Trump’s policies in court, he usually won, if not at first, then later upon appeal. But Joe, as he likes to remind us, isn’t like ‘the previous president.’

When SCOTUS told him ‘no,’ Joe himself admitted that the CDC probably didn’t have the power to unilaterally enact the policy Democrats had tried (and failed) to put into law through conventional means. But he was going to let them do it anyway. That doesn’t square with his oath to defend the Constitution and would itself have been a legitimate reason to start talking about impeaching him.

Having failed to pass legislation, Dems — led by the Squad — looked for a way to cheat the system. They made a lot of noise talking about how just how unfair ending the eviction moratorium would be to renters. The CDC acted against their own guidance and extended the moratorium until October.

For context — the power the CDC was trying to wield under the guise of CCP virus response was a ‘re-imagining of CDC’s minimal legal power to fumigate a building in the instance of an infestation.

The court had previously struck down this ban in areas where outbreaks had significantly lessened… with exemptions in places where the bug was still a problem. Now the entire moratorium has been struck down as illegitimate.

The US Supreme Court on Thursday night struck down a federal eviction moratorium that was recently extended by President Joe Biden’s administration without congressional support.

The decision to end the pandemic-related eviction freeze came as a result of a legal challenge to the policy brought by a coalition of landlords and real estate trade groups.

On Aug. 3, the moratorium was extended by the Centers for Disease Control and Prevention, despite a lack of congressional approval.

It was a 6-3 decision in which 3 of the 4 liberal judges (Chief Justice Roberts sided with the conservatives this time) dissented out of Delta variant fears.

The White House, Pelosi, and others are raging.  According to Biden’s designated liar, the SCOTUS decision was a mistake, “As a result of this ruling, families will face the painful impact of evictions, and communities across the country will face greater risk of exposure to COVID-19,”

They don’t understand (or don’t care about) that most landlords are small business owners. They have mortgages and families to feed also. However, this is an administration whose first priority is to look good to the far left. The liberal way is to take money away from one family who needs it and give it to another family who needs it also.

Predictably, the left is outraged. NYC’s Mayor Bill de Blasio is blasting this decision as a ‘right-wing extremist.’

Our prediction? This ruling will be used as part of the left’s justification to ‘rethink’ our justice system… in the same kind of way that they ‘rethought’ the CDC’s lawful powers, or they ‘rethought’ police funding, etcetera.

While de Blasio is raging, maybe he should look in the mirror. Dana Perino gave him a reminder which seemed like a slap in the face.

Sir, NY still has 98% of their rental aid sitting in its coffers. NY has distributed the same amount as Wyoming. Your citizens deserve so much better. https://t.co/FFKDHRUtwL

Right Glock Mom came up with a splendid idea for the money de Blasio has sitting around.

Use your covid billions to reimburse landlords, Bill. It just might prevent them from losing their homes as well.

But Sandy, de Blasio is a socialist. He couldn’t give money to people who believe in free enterprise, even if it means they can hold on to their homes and feed their families.