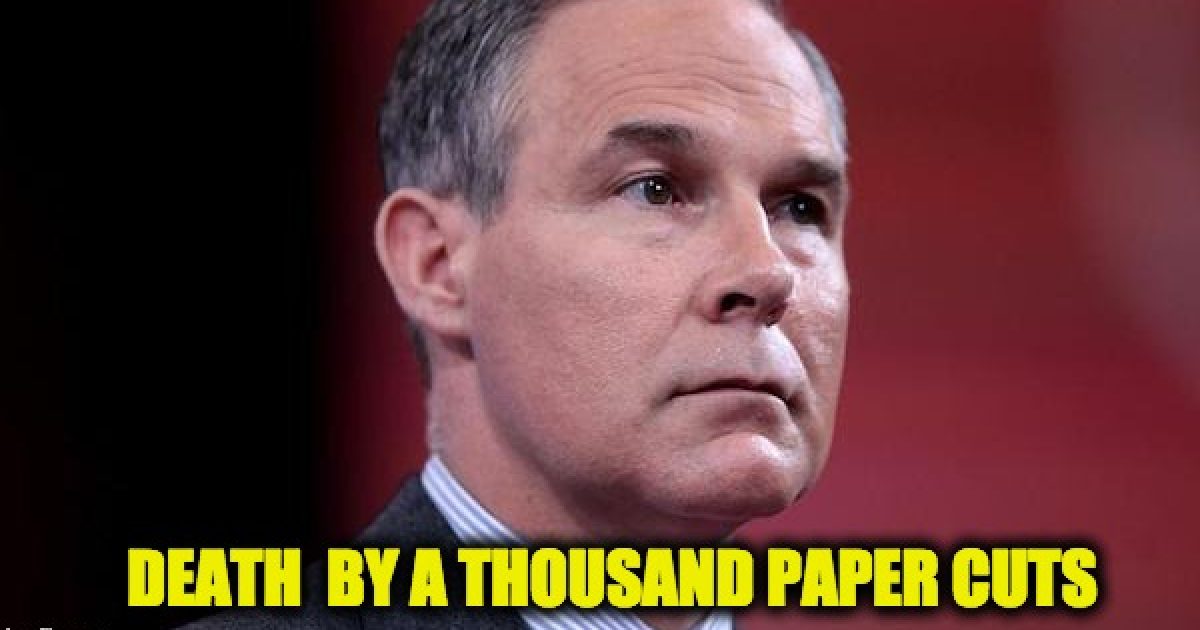 This was the perfect example of “death by a thousand paper cuts.” Scott Pruitt “resigned” from his position leading the Environmental Protection Agency (EPA) on Thursday. While the official line is that he resigned, but he was probably pushed.

Pruit is being investigated for 14 different incidents but was suspected of more, the latest of which was the accusation that he kept two sets of calendars to hide some meetings.

Today CNN reported about what might very well have been the last straw:

In a letter sent to the EPA’s Inspector General Thursday, Democratic Reps. Don Beyer of Virginia and Ted Lieu of California referenced the CNN report, which also aired on “Anderson Cooper 360.”
“Willful concealment or destruction of such records is a federal crime carrying penalties ranging from fines to imprisonment,” they wrote in the letter.
An EPA spokesperson told CNN Thursday, “Despite continued false accusations there are no secret calendars or schedules. EPA has released the meetings and events Administrator Pruitt has attended — which the media has already reported as meetings with industry — and to report anything else would be categorically false.”

Yesterday Pruitt and his wife were at the White House for the Independence Day barbeque, but just a few hours after CNN reported about the congressional letter, President Trump made the announcement on Twitter.

…on Monday assume duties as the acting Administrator of the EPA. I have no doubt that Andy will continue on with our great and lasting EPA agenda. We have made tremendous progress and the future of the EPA is very bright!

And as they say, there’s the rub.  Other senior members of the Trump administration wouldn’t have lasted that long with all of the scandals chasing him, but the President believed he was doing a good job. Pruit would probably tell you that he was targeted by Democrats who didn’t like the fact that he was easing up on the anti-jobs EPA regulations. But if that is true and Pruitt knew about it, then the EPA Chief should have kept his nose clean. Democrats shouldn’t celebrate because whoever replaces Scott Pruitt will have the same agenda–it came from President Trump.

It was indeed death by a thousand paper cuts Axios listed many of “paper cuts;”