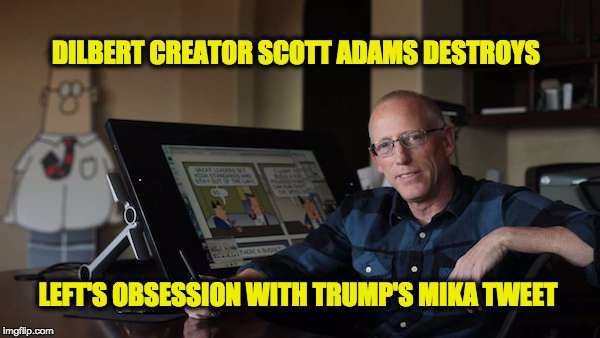 Over the last year or so, we’ve documented just how right Adams has been about culture and electoral politics.

Now, in the wake of the recent tumult over President Trump’s tweets about MSNBC hosts Joe Scarborough and Mika Brzezinski, Adams is back to explain how Trump’s Tweets will destroy the world… and most Americans can’t take a joke.

Here’s a link to my Periscope video explaining how President Trump’s mean tweets about Morning Joe will destroy everything you love. Wake up, people! It’s common sense! Tweets kill!

On a totally unrelated topic, I have confirmed that 30% of the public can’t identify a joke without the help of a service animal.

In the video below Adams with tongue planted firmly in his cheek, explains how Trump’s tweets were “destroying” everything (you’ll notice that Adams is actually explaining that Trump is doing a lot of good and the media is ignoring it to focus on his mean tweets):

“First there’s the impact on the economy. It doesn’t look like it yet — the stock market is still very strong, consumer confidence is high, jobs are good. But I think you can see a tweet like this is going to cause people not to invest. Let’s say you were going to open a new coal mine, because the government had removed some regulations, the Trump administration did. You’re thinking this is looking good… and then this freakin’ tweet comes out. Oh my God, no way, who’s going to buy coal after this? Any economist will tell you it will just build up steam like a snowball down a hill.

You thought ISIS was defeated — you probably saw the news today that Iraq says the ISIS caliphate is actually destroyed as of today. On the surface, this would look like a good thing, because you’ve probably been hoping for this day for a long time. And on the surface, it looks like President Trump gave General Mattis free reign to handle this thing, and with the help of the allies, it looks like he brought it to a fairly speedy success.. But imagine how much faster ISIS could have been defeated if Trump had never tweeted that thing about Morning Joe. You kill one person with a tweet? I don’t think you can defend that. That is immoral. That is Hitler-like behavior.”

I feel bad for the half of the country with no sense of humor. They are missing quite a show. https://t.co/Ey1K5dikYD

Later on Adams continued explaining Trump’s rhetorical genius by pointing out the true meaning behind the President’s recent tweet showing him wrestling CNN. As Adams explains, the video brilliantly accentuates Trump’s attacks on CNN by forcing us all to subconsciously associate CNN’s attacks on Trump with FAKE wrestling!