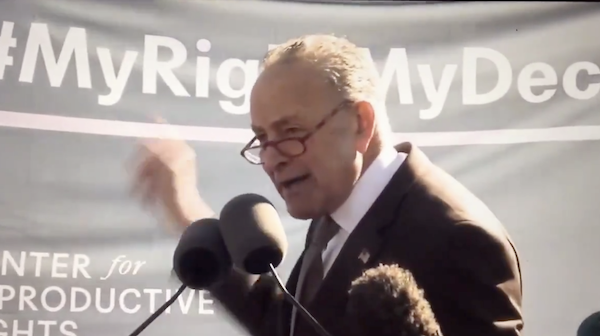 Proving once again that he doesn’t give a rats arse about anything other than party, on Wednesday Senate Minority Leader Chuck Schumer (D-NY) threatened Supreme Court Justices Neil Gorsuch and Brett Kavanaugh, saying they will “pay the price” if they take what he considers an anti-Abortion position in a Louisiana case about the Louisiana Unsafe Abortion Protection Act which requires an abortion doctor to have hospital privileges. The case was argued before the Supreme Court, also on Wednesday. Schumer threatens Supreme Court

Reporters should be asking every Senate Democrat:

Do you agree with your leader threatening Supreme Court Justices?

“I want to tell you Justice Kavanaugh and Justice Gorsuch: You have unleashed a whirlwind, and you will pay the price!” – Chuck Schumer pic.twitter.com/jyAgpE9HVv

Schumer was speaking at a pro-Abortion rally run by the “Center for Reproductive Rights,” I doubt (I hope) the demagogue who does not know how to wear glasses meant the price those Supreme Court justices were supposed to pay included physical violence. However, the violent tone of his words is typical of what is heard from liberals since Donald Trump was elected.

The Senator added, “We will tell President Trump and Senate Republicans who have stacked the court with right-wing ideologues that you’re gonna be gone in November, and you will never be able to do what you’re trying to do now ever, ever again!”

Ah, so the real reason Schumer is attacking the Court for a decision they haven’t yet made is it gives him a reason to attack Trump. Right-wing ideologues, Chuckie? Why? Because they believe in interpreting the Constitution as written? Or is it because you don’t believe in the Constitution? Does that make Kagen and Sotomayor left-wing ideologues because they believe in legislating from the bench?

“This morning, Senator Schumer spoke at a rally in front of the Supreme Court while a case was being argued inside. Senator Schumer referred to two Members of the Court by name and said he wanted to tell them that ‘You have released the whirlwind, and you will pay the price. You will not know what hit you if you go forward with these awful decisions.’ Justices know that criticism comes with the territory, but threatening statements of this sort from the highest levels of government are not only inappropriate, they are dangerous. All Members of the Court will continue to do their job, without fear or favor, from whatever quarter.”

Per Scotus Blog, the case centers “on the constitutionality of a 2014 law known as the Louisiana Unsafe Abortion Protection Act, which requires doctors who perform abortions in Louisiana to have the right to admit patients to a hospital within 30 miles of the place where the abortion is performed. In 2018, a federal appeals court rejected a challenge to the law, concluding that it did not “impose a substantial burden on a large fraction of women.”

A similar law in Texas was struck down by the Court four years ago in the case Whole Woman’s Health v. Hellerstedt. In that decision, the Court said the law placed an undue burden on women seeking abortions because it would significantly reduce the number of abortion clinics in the state.

The Supreme Court Justices in Louisiana case asked how that case was different from the Texas one:

During Wednesday’s oral arguments, Kavanaugh and Chief Justice John Roberts questioned whether Lousiana might be different from Texas in terms of the practical effect the law would have.

“Assume all the doctors who currently perform abortions can obtain admitting privileges, could you say that the law still imposes an undue burden, even if there were no effect?” Kavanaugh asked.

Roberts suggested other states may have different standards that might be constitutional.

Gorsuch did not speak during the arguments.

Three years ago President Donald Trump criticized a federal judge who issued a block on his “travel ban.” Schumer objected to the President’s criticism saying,

“The President’s attack on Judge James Robart, a Bush appointee who passed with 99 votes, shows a disdain for an independent judiciary that doesn’t always bend to his wishes and a continued lack of respect for the Constitution, making it more important that the Supreme Court serve as an independent check on the administration,”

Schumer didn’t criticize a court decision as the President did, instead, he attempted to personally threaten the Supreme Court before they issued a decision proving he is a hypocrite and political hack who puts politics before the country.