Report: Schiff’s Staff Briefed on Russia ‘Bounty’ Intel in February — Took No Action, Informed No One, But Bashed Trump

Was He The NY Times Leaker? 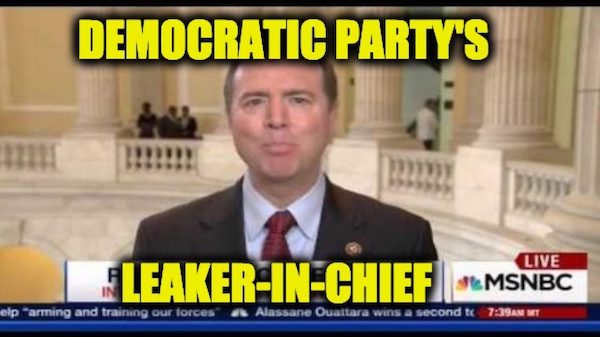 On Thursday, Sean Davis and Mollie Hemingway reported that shifty, lying Comrade Adam Schiff, D-Calif., was briefed on allegations that Russians were offering the Taliban bounties on American soldiers in Afghanistan, but took no action and informed no one. Schiff’s Staff

During a news conference on Tuesday, Schiff attacked the president for his alleged failure to “get to the bottom” of the matter, and claimed intelligence officials may be reluctant to brief Trump “on things he doesn’t want to hear.”

“I find it inexplicable in light of these very public allegations that the president hasn’t come before the country and assured the American people that he will get to the bottom of whether Russians are putting a bounty on the heads of American troops and that he will do everything in his power to make sure that we protect American troops,” he said.Sfchif

Schiff blastedTrump, claiming he didn’t do enough to address to respond to the allegations. But per the Federalist, the intelligence about the Russians putting a bounty on the heads of our military was given to Schiff’s staff during a congressional delegation, or CODEL, trip to Afghanistan in February. If the Federalist’s report is true, and his staff was briefed on the matter last winter, then why did Schiff not disclose the information to Congress or conduct hearings? Schiff has refused to disclose that his staff was personally briefed, the report said. Then again Schiff also claimed that his staff never talked to the Ukraine whistleblower–a lie. So doe we believe him now?

According to the Federalist:

Asked by a reporter Tuesday if he had any knowledge of the Russia story prior to the New York Times report, Schiff said “I can’t comment on specifics.”

Schiff’s recent complaints that Trump took no action against Russia in response to rumors of Russian bounties are curious given that Schiff himself took no action after his top staff were briefed by intelligence officials. As chairman of the intelligence committee, Schiff had the authority to immediately brief the full committee and convene hearings on the matter. Schiff, however, did nothing. He did not brief his committee on the matter, nor did he brief the gang of 8, which consists of top congressional leadership in both chambers.

Schiff is demanding that the Trump administration brief all of Congress about the unverified allegations, yet he himself did not ask for a briefing of the Intelligence Committee following the February briefing of his own staff.

Intelligence committee spokesman Patrick Boland did not explain Schiff’s inaction and refused to say why the California Democrat, also known as the “bug-eyed bloviating BS barrister of Burbank,” withheld the information from his Congressional colleagues for months.  Also, Davis and Hemingway said, “Boland also did not explain why travel records regarding the Congressional staff delegation trip to Afghanistan had not yet been disclosed in the Congressional Record as required by law.”

Of course, all of this shows that Schiff is driven solely by partisan politics and hatred of Trump.

Just as Schiff falsely claimed that he and his staff had no interaction with the anti-Trump leaker behind the impeachment push and falsely claimed he was privy to secret evidence of collusion with Russia, Schiff attacked Trump for not taking action in response to the Russian bounty rumors while refusing to disclose that his own office was briefed in February and did nothing in response.

Maybe it’s time to hold Schiff accountable for his lack of action. Or did he have too much action?  Adam Schiff has a reputation of being the Democrat’s leaker-in-chief. The question raised by this report but not asked is, was Schiff, the person who leaked the story to the NY Times?

Exit question:  Where’s the media on this?