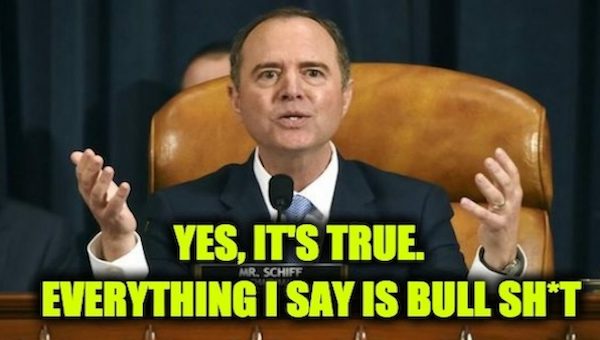 If you didn’t have the evidence you needed that McCarthy is right to kick Schiff out of his role on the intelligence committee, this reaction would be reason enough.

The Twitter files have given one revelation after another not only of insanely partisan censorship of people using Big Tech but of the profoundly unconstitutional role that the federal government has played in using social media as a ‘subsidiary.’ We recall the use of phrases like ‘master-canine relationship’ in detailing just how much control the FBI was exerting over the ability of ordinary citizens to exercise their right to free speech.

Some of the things they were silenced over turned out to be true statements that did not have the endorsement of the government. (Unorthodox opinions on COVID origins, for example, mask efficacy or risks of adverse effects associated with a certain government-mandated medical procedure.)

Adam Schiff is a big fan of elected officials like himself dictating who should and should not have the right to speak in America. He recently made an open appeal to Facebook (now ‘Meta’) to block the account of a presidential candidate he happens to hate with the heat of a 1000 suns.

As if to double down on that display of contempt for the First Amendment, Schiff is (irony noted) threatening the one company that has stepped up as a WHISTLEBLOWER (remember that word?) to expose the whole Democrat/Administrative-state/Media/BigTech industrial complex.

REP. SCHIFF: "We've got a big problem right now with social media companies and their failure to moderate content and the explosion of hate on Twitter, the banning of journalists on Twitter. […] If you'll be responsible moderators of content, we will give you immunity." pic.twitter.com/zujwUbEmUd

Reality is the opposite of what Schiff just said. Then again, when has Schiff ever been correct or honest?

The immunity offered by Section 230 is specifically a function of Big Tech behaving as neutral platforms and NOT as content regulators.

Postal services aren’t responsible for mail fraud or ransom notes because they don’t read and regulate the content. Newspaper editors, radio stations, and TV broadcasters, on the other hand, are responsible for what gets communicated by their medium. They can be sued for it.

But Schiff doesn’t give a rat’s backside about the law, does he?

He is a simple, single-minded dirty-tricks political operative: reward those who serve the agenda and punish those who don’t.