The SCHIFF CONSPIRACY? What Schiff Did BEFORE The Ukraine Call Needs Some Answers 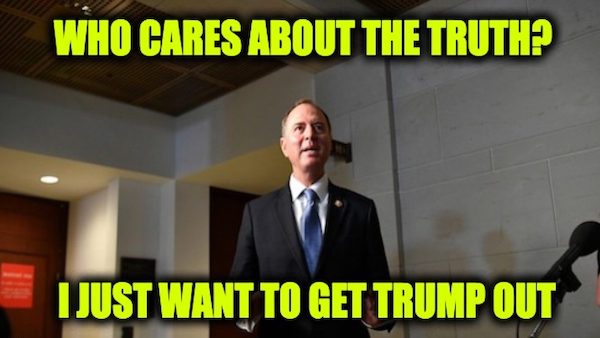 As William Shakespeare wrote in Hamlet, “Something is rotten in the state of Denmark.” Something’s rotten with Adam Schiff, more rancid than usual. Is there any way to explain Schiff’s office’s OFFICIAL action on the days BEFORE the July 25th phone call that does NOT require conspiracy as an explanation?

We know about the staffers Schiff head-hunted out of Obama’s holdovers from the National Security Council one day AFTER the Zelensky phone call. But that isn’t the ONLY irregularity happening in his office around that same time.

Remember, we have learned (after he had initially denied it) that Schiff’s team had met with the so-called whistleblower. The man who may (or may not) be the same person who has been mentioned by name in other problematic anti-Trump activities dating back to 2017.

It all goes to the question of motive that kicked off the initial impeachment.

There’s another piece of the puzzle that was hiding in plain sight. One that was even reported on ClashDaily, and The Lid,  but we didn’t yet realize the significance.

It was right there in our story about the Schiff-weasel’s staffers having a really suspicious trip to Ukraine in August. It was sponsored by the Atlantic Council, which thereby connected Schiff’s team to people implicated in Burisma. The rat’s nest of connections in the Atlantic Council warrants a story of its own.

At the same time, the whistleblower was filing his report, Adam Schiff sent his staffer Thomas Eager to on a trip to Ukraine sponsored by The Atlantic Council, an organization whose staff included the co-founder of Crowdstrike. the ONLY people who looked at Hillary Clinton’s server. The FBI nor any federal agency was allowed to examine it, Only Crowdstrike. Schiff staffer Eager got to meet Ukraine’s former President who had just been ousted over issues of Corruption. Weird, eh? He also met with acting US Ambassador to Ukraine, Bill Taylor, testified as a witness in Schiff’s impeachment witch hunt.  The trip and the meetings were not illegal, but the fact that Schiff kept them secret is an indication that this entire mess has been a set up from the start.

When we learned about this junket, we openly wondered ‘why’? But we didn’t yet have the answers that were staring us right in the face.

The entire thread this is lifted from is pretty damning to Schiff and company. But this one is of particular interest.

Notice the date? Schiff authorized the trip on July 22, three days BEFORE the infamous Trump-Zelensky call.

We would all be very interested to know what prompted a decision that just HAPPENED to land Schiff’s staffer smack dab in the middle of the scandal that led to impeachment, conveniently talking to some of the very same people who had the most to gain by Trump getting impeached over the Ukraine issue, BEFORE the issue ever ‘officially’ came to light.

More than that, it happened before the event that was so ‘impeach-worthy’ even took place. Unless Schiff has Marty McFly’s DeLorean or few of those ‘Precogs’ from Minority Report, he had no way of knowing about the President’s ‘impeachable offense’ days before it ever happened.

Schiff loves to throw around terms like ‘scheme’ when talking about Trump and playing amateur psychic when it comes to interpreting Trump’s motive.

We’re no Amazing Kreskin over here, so we have nothing more revealing than the evidence at hand. But we find ourselves at a loss to provide ANY explanation whatsoever that does not put Schiff solidly in the position of leading a conspiracy against an elected official.

Parts of this post was first seen a Clash Daily