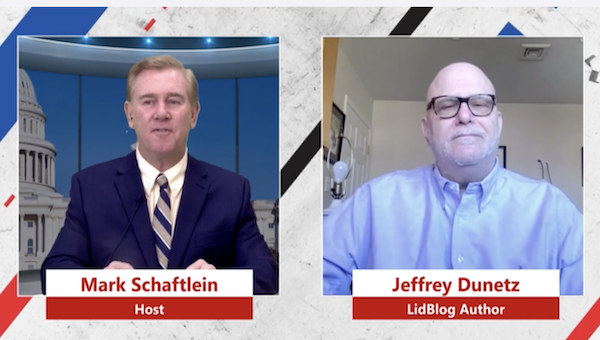 Yesterday Wed. On Jan. 26th, Jeff Dunetz, The Lid had the honor of being the guest of Mark Schaftlein on his program The Schaftlein Report. Mark and I had a great conversation on all the hot news of the day. It seems as if every time I am a guest on Mark’s show, it’s a big news day and this time was no different. Our topics included: Schaftlein Report Jan 26

1)SSupreme Court Justice Stephen Breyer to Retire. Will the GOP fight the confirmation of his replacement? Who will Biden nominate?  Where can Jeff send his resume?

2)  What’s going on in Ukraine?. Can Biden rally allies against Putin?  Will they support Biden after the Afghanistan Disaster?  Is it a case of “wag the dog?” Will there be a Russian invasion or will America and Russia calm things down?  Will Biden block the Nordstream 2, to motivate Putin to move his troops away from the Ukraine border?

3) The Federal Reserve lays the groundwork to raise interest rates and fight inflation. When they start raising the interest rates beginning in March. How high will the raise be? Is it already baked into Wall Street or will it cause stock prices to fall?

4) Blue-run Cities see  Carjackings skyrocket- In Washington DC, 37 so far this year including a city commissioner who wanted to defend the police. In Philadelphia, 100 carjackings this year. Why is this happening? Why are cities seeing a rise in police shootings?

5) A 29th House Democrat Jim Cooper (a 34-year veteran) announces he won’t seek re-election, Why are so many Democrats leaving? Pelosi announces plan to run again at age 82 – Will she be Leader of Democrats lose the House? If the GOP retakes the house how many seats will they take? Will the thought of Pelosi staying in the house give Americans night terrors?

6) VP Harris blames Covid for Human Trafficking at the border. Was she talking about America’s border with Mexico or Ukraine’s border with Russia? Does she even know where the American/Mexico border is?

7) Two Republican Congressmen from Texas say DHS Secretary Mayorkas should be impeached due to not obeying the US laws already on the book DHS say yes? 14K pounds of the deadly drug Fentanyl was seized at the border that’s double last year. What can the GOP do to fight this scourge on our kids?

9)Thursday, Jan. 27th is International Holocaust Remembrance Day. How is it being covered at The Lid?

Make sure to watch/listen to Mark’s program every Monday-Thursday. It’s always a great show, but to be honest, it’s a little more extraordinary when I’m the guest. BTW beginning next Thursday, Feb. 3rd, The Lid will be the guest on the Schaftein Report every Thursday.

Truthfully no matter who’s the guest, you will enjoy tuning into the Schaftein Report every Mon-Thurs. You find the latest episodes with video on the show’s website https://schaftleinreport.com/ and the Schaftlein Report’s Facebook page, which can be found by clicking here. Also, you can listen to every show on Apple Podcasts here, Audible Podcasts by clicking here, or iHeart Radio at this URL.

Enjoy the Wednesday episode below and don’t miss any episode of the Shaftlein Report every M-Th: