WATCH The Lid On The Schaftlein Report: Bail Reform Causes Spike in Crime (Along With Other News) 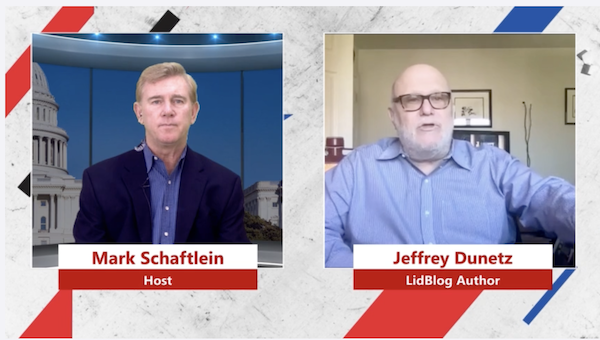 The Lid had the honor of being the guest of Mark Schaftlein on his program The Schaftlein Report the day before Thanksgiving. Mark and I had a great conversation on all the hot news of the day. It’s true that every time I am a guest on Mark’s show, it’s a big news day. This day was a particularly active news day, more than usual. Along with our perspective about breaking news, we discussed our opinions on major issues, including bail reform, the difference between the Arbery and the  Rittenhouse cases, the failure of President Brandon, and much more. We even had time to fit in some advice for those who need to get presents for friends and family before Christmas. Schaftlein Report bail reform

1)The Waukesha Killer was a RACIST promoting BLM and his desire to Kill all White People on his social media posts. He recently committed a similar automotive crime. Why doesn’t the media refer to this as a domestic terrorist crime? Many in the Liberal MSM call the intentional killing a car accident instead of the murder of 6 people. The victims included dancing grandmas and a cute eight-year-old boy.

2)The Waukesha massacre is a prime example of “Bail Failure” happening across America, particularly in blue cities. *Left-wing District Attorneys are responsible for this, and the Biden Administration supports no cash bail. And the DA handling the case worked for bail reform in Milwaukee and said it would result in the deaths of innocents.

3) Democratic cities that enact “Bail Reform” see a significant rise in crime and Repeat Offenders – sometimes 15 to 20 crimes per person
*Homicide is up 26% in LA, And there are theft mobs stealing from major department stores like Nordstroms and pharmacy chains like CVS in San Francisco.

4) BLM had threatened “no Peace” if the jury returned a not guilty verdict in the Arbery case, But all three defendants were found guilty of felony murder. It is also threatening former police office and Democratic Party NYC Mayor-elect Eric Adams. Adams takes over the city on January first. He wants to reinstate many of the anti-crime policies canceled by DeBlasio, which is why Black Lives Matter is threatening the second African-American mayor in NYC history.

5) Biden refuses to apologize to Rittenhouse for calling him a “White Supremacist.” Many liberals claimed if Rittenhouse was black and killed two white people, he wouldn’t have gotten off. I supposed those liberals never heard of the O.J. Simpson case. We also discussed the reason Rittenhouse was innocent, and the Arbery defendants were found guilty.

6) In Economic News, Sen. Manchin calls on Biden to restore the Keystone XL Pipeline work and why we believe Biden would never do that. Biden claims he is not trying to raise gas prices to combat climate change—another fib from clyin Joe Biden.

7) CA Gov. Newsom rejects 109 fracking permits while gas nears $6 in some parts of CA *Radical Climate Policies with a goal of NO Oil and Gas Production in the state by 2045.” I guess they cant use all of those tax revenues–just like CA, New York has a significant amount of oil under the ground. Cuomo never allowed companies to drill for the oil (maybe because the oil works didn’t have women that turned him on, so there was nothing  he could harass?)

8) Jobless claims down to 199K, the lowest level since 1969 – Why is the FED continuing to pump more money into the system when we are near full employment and prices are exploding up? Boys and Girls, can you say “Weimar Republic?”

9) New home prices are up 17% year over year. The cost of home repairs is also skyrocketing

10) The latest polls say that only 29% of Americans believe the country is on the right track. The wrong track percentage is 63% (a whopping 34% upside down) – OUCH! Are you listening, Brandon?.

Make sure to watch/listen to Mark’s program every Monday-Thursday. It’s always great, but to be honest, it’s a little more extraordinary when the guest is me. Watch the Schaftein Report on the show’s website https://schaftleinreport.com/ or on the Schaftlein Report’s Facebook page, which can be found by clicking here. You can also listen to every show on Apple Podcasts here, Audible Podcasts by clicking here, or iHeart Radio at this URL.

For now, watch the latest show with the person my wife says is the best guest below– I promise you will find the program interesting, informative, and at times a bit snarky (of course, it wouldn’t really be me without snark)