Maxine Waters Opponent “Destroys” Her In Ad Filmed Outside Her Mansion 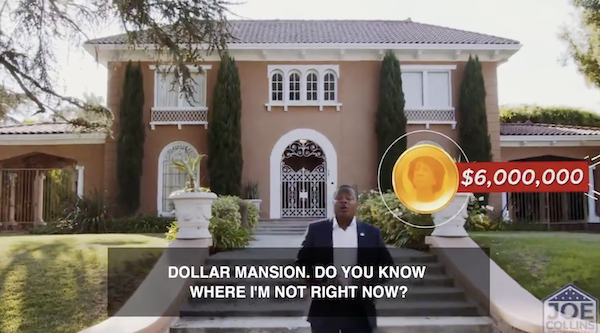 There out to be a law about a member of congress so arrogant, so haughty that she wouldn’t be caught dead living in the district she represents.  Maxine Waters is such a member.  And her opponent in the 2020 election, Joe Collins is making hay of her disdain for living in her congressional district. U.S. Navy veteran Joe Collins has released a scathing campaign ad attacking Rep. Maxine Waters, D-Calif., for living in a multimillion-dollar mansion just outside the District, which is plagued by crime and poverty. scathing rebuke of Maxine Waters

Navy Veteran Joe Collins is running against Maxine Waters in California. His latest political ad has been described as a “scathing” rebuke of Waters who lives in a $6 million mansion while the rest of the district lies in ruins from homelessness, riots, and poverty. His ad raises the question – does her angry, hate-Trump-filled rhetoric help her district in any way?

“Do you know where I am? Maxine Waters’ $6 Million Mansion.

Do you know where I’m not? Her District.

Mansion Maxine Waters doesn’t live in her District — I do.

My name is Joe Collins and I’m running for Congress against Maxine Waters.

Here’s the ad of Joe in front of Maxine’s House:

Do you know where I am?
Maxine Waters’ $6 Million Mansion.

Do you know where I’m NOT?
Her District.

Mansion Maxine Waters doesn’t live in her District — I do.

My name is Joe Collins and I’m running for Congress against Maxine Waters.

Waters’ house was originally in her district. When the legislative lines were redrawn, it was placed slightly out of it. She was elected for the 43rd District in 1991. Prior to that she was in the California Assembly.

“She has a very nice community, she has a really big house – and that’s just one of three or four house that she has. And meanwhile, she comes to the inner city and preaches the message of hatred, and a message of us vs. them… And when she’s done spreading the hate through our community, she goes back to this huge mansion while the rest of us live in crime-infested, poverty, neighborhoods where people are absolutely struggling to live.

We have bars on our windows. We don’t have any high-paying quality jobs. And people needed to see that. And so it was very important that we shined a light on the disparities between how Maxine Waters lives and … how we actually live.” Joe Collins told Fox News.

Collins is the first politician in decades to bring that disparity to light in a powerful way. Others have mentioned it, but were quickly shut down by the leftists who want her to stay for her hate-filled rhetoric. There are numerous leftists commenting on his Twitter post.

Joe reportedly served over 13 years in the U.S. Navy and his bio says he fought in the Iraq War.

The Center for Responsive Politics lists her net worth at over $700k in 2018, although the page reveals that she has investments totaling $3 million (mostly real estate) and is ranked 190th for wealth in the House. Money, Inc lists her net worth at $2 – $3 million. She has come under fire for corruption numerous times including, directing bank federal bailout dollars to an unsound bank (OneUnited)  to help her husband who was an officer and stock-owner of the bank, paying her daughter hundreds an thousands of dollars to work on her campaign, and Mad Maxine has been called anti-Semitic for her anti-AIPAC videos and her friendship with Louis Farrakhan, the racist leader of the Nation of Islam.

This seems as though for the first time in a long time California’s 43rd District has a real choice. Who will they pick as their representative?