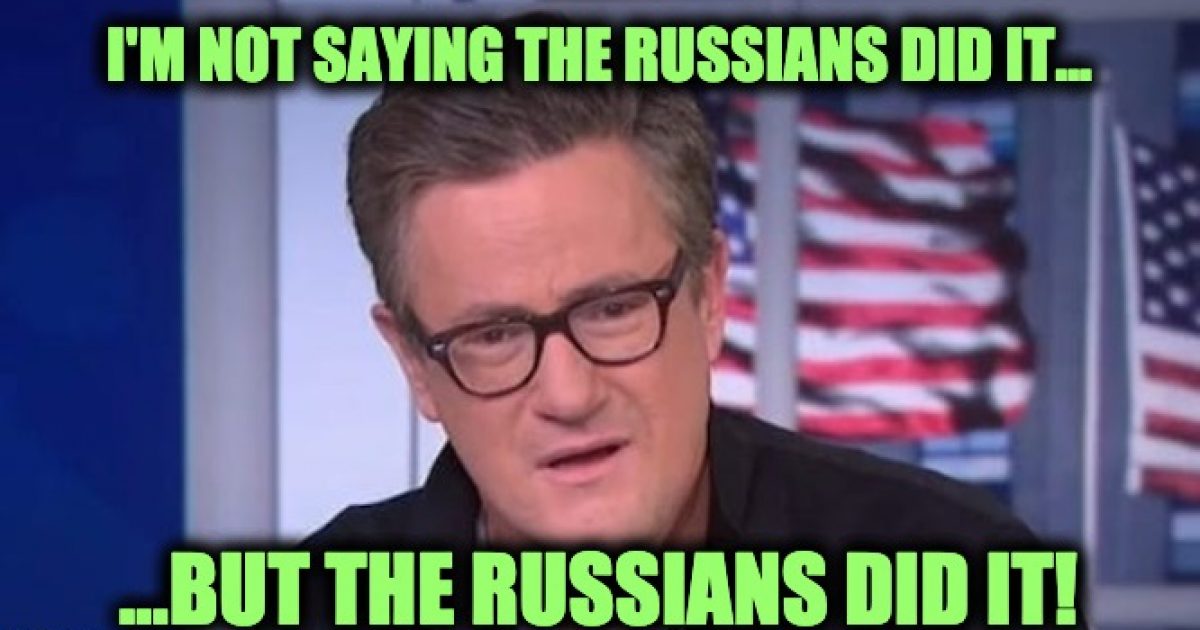 On Saturday, the news broke that financier Jeffrey Epstein died by apparent suicide in the Manhattan jail he was being held in until his trial for raping girls as young as fourteen and forcing them to have sex with of his very high-profile friends. At the time of his death, people believed that Epstein was on 24-hour suicide watch (he wasn’t), which motivated Trump-hating Joe Scarborough to indulge in a touch of conspiracy theorizing of his own, placing the blame for the suicide on the Russians.

Yes..he said it was the Russians.

“A guy who had information that would have destroyed rich and powerful men’s lives ends up dead in his jail cell. How predictably…Russian,” he said on Twitter.

A guy who had information that would have destroyed rich and powerful men’s lives ends up dead in his jail cell. How predictably…Russian.

He reportedly tried to kill himself two weeks ago. And is allowed to finish the job now? Bullshit.

Powerful Democratic and Republican figures breathing a huge sigh of relief—as well as a Harvard professor or two.

Scarborough has been pushing the false theory that the Russians stole the election from Hillary. Based on the official Morning Joe line, blaming the Epstein suicide on the Russians may have very well been Scarborough’s way to blame Trump.

Are the Russians who did this in the room with you now?

Nah, the Russians wouldn’t go into a room with him. Even the Russkies would be afraid Joe would pick up his guitar and start playing what he calls music–they could go deaf (or like the Morning Joe panelists they could go dumb).

I agree it is suspicious but Russia? Why would Russia want to murder him?

Because ITS ALWAYS RUSSIA with these clowns. Russia =’s Trump, Joe is playing an association game….very badly….but he is trying.

I bet if someone asked former Pres. Obama, he would have blamed Bush (or the Jooos).

While he’s not a doctor, Caleb Hull may have made an accurate diagnosis.

But this guy may be correct also.

I would have to say that as a baby he was dropped on his head. #ClintonBodyCount

Behold your great boogeyman. The reasons for all your problems, all your enemies, all your fears – all Russian. Anything that might cast a shadow on us, your saviors – Russian. Anyone who questions this – Russian. Clinton's 26 flights on the pedo plane – Russia.

Perhaps Joe is just trying to sell his new product:

Sorry I disagree. The Epstein suicide couldn’t have been Hillary. She doesn’t do anything that doesn’t advance her theory that the 2016 election was stolen from her.

After a day of being Twitter-blasted. Joe took a giant step backward. The man who comes up with conspiracy theories to blame Trump for everything from Russiagate to bad weather claimed he wasn’t offering a theory,  just being glib:

Glenn, forgive me for making a glib, offhanded comment while, yes, also poking fun at crazy conspiracy theories that Republicans tried to pin on Clinton in the 90s. I didn’t know you would interpret my glibness with the intensity of the Dead Sea Scrolls scholar.
Relax, buddy. https://t.co/foS2rbRkMt

But you know what? In the end, this entire blow-up might not be Joe’s fault at all:

Have you noticed that you can barely see Mika’s lips move when she makes Joe speak. And you never see where Mika’s left hand is!