Was It For Worldwide Perception Or To Help Biden Lie To America? 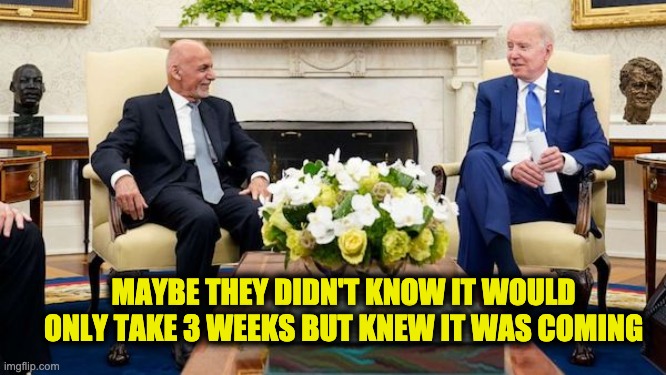 Three weeks before the Taliban took over the Afghanistan Capital city of Kabul, the Taliban was making advances. They had already controlled about half the country. Still, U.S. President Joe Biden told Afghanistan President Ashraf Ghani to create the “perception” the Taliban weren’t winning, “whether it’s true or not.”  In other words, he told Ghani to lie.  Reuters was allowed to review a copy of the July 23rd phone call transcript, which they verified by listening to the call’s audio The transcript and audio was provided to Reuters under the condition of anonymity by a source who was not authorized to distribute it.

That was three weeks before the Taliban took over Kabul, and at the time, the terrorist group already controlled half the country.  Biden knew the Afghan Troops’ battle against the Taliban wasn’t working but wanted Ghani to make it look successful anyway.

Much of the call was focused on what Biden referred to as the Afghan government’s “perception” issue.

“I need not tell you the perception around the world and in parts of Afghanistan, I believe, is that things are not going well in terms of the fight against the Taliban,” Biden said.

Did Biden push Ghani to be dishonest so he could lie to America? He didn’t want anything to ruin the victory lap he intends to take on the twentieth anniversary of the September 11th terrorist attacks, which IMHO is the reason he pushed through a disorganized evacuation that left behind Americans and Afghans we promised to protect to suffer the revenge of the Taliban,

Afghanistan was promising a shift in its military strategy, to start focusing on protecting “population centers” – major cities – rather than fighting to protect rural territories. Biden referred approvingly of that strategy. He said that doing so would help not just on the ground but in the “perception” internationally that was required to shore up world support for the Afghan government.

He wanted the Afghans to promote the new strategy:

Biden told Ghani that Afghanistan’s prominent political figures — including former Afghan President Hamid Karzai — should give a joint press conference that backed a new military strategy on how to defeat the Taliban, saying: “That will change perception, and that will change an awful lot I think.”

“I’m not a military guy, so I’m not telling you what that plan should precisely look like, you’re going to get not only more help, but you’re going to get a perception that is going to change in terms of how , um… our allies and folks here in the States and other places think you’re doing,” Biden said.

“ He’s not a military guy? Then why didn’t he listen to American military leaders regarding how to handle the withdrawal?

On the call, neither Biden nor Ghani said the war effort was about to collapse. But the fact they had this type of conversation three weeks before the collapse was an indication that they knew what was going to happen. Biden’s urging of Ghani to brag about a new strategy is proof that he was trying to be dishonest with the American people—not letting us know what was happening. At the very least, it was an indication that we should have started to evacuate our citizens and allies three weeks earlier. If we did, there might not be anyone left behind—not that his administration seems to care anyway.