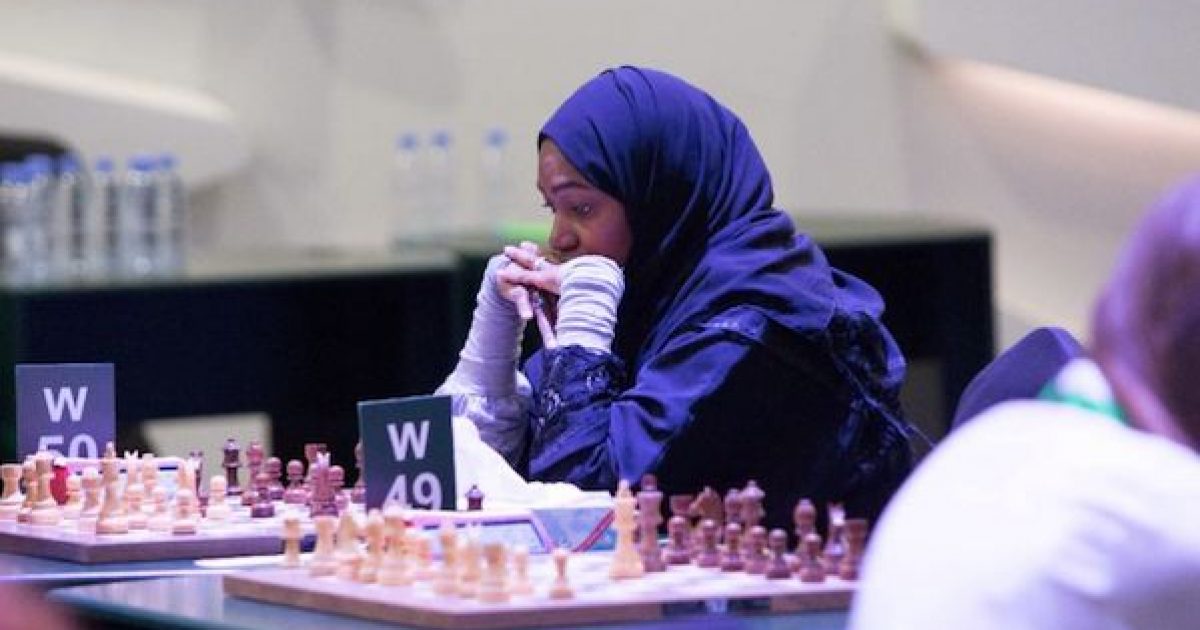 Hosting almost 200 players from 70 countries competing in the King Salman World Rapid and Blitz Chess Championship in Riyadh was an opportunity for Saudi Arabia to showcase the recent easing of their oppressive Sharia-based cultural laws. But they probably didn’t realize hosting the Championship would put them between a rock and a hard place until it was too late.

Ukrainian chess champion Anna Muzychuk refused to defend her titles in Riyadh this week because despite the recent loosening of the iron-fisted religious rule of Wahhabi Islam the kingdom remains an oppressive environment for women.

“As to whether it was right or wrong, there will certainly be people who will support me and people who will condemn me,” Muzychuk said. “But I took this decision and I am responsible for it.”

Saudi Arabia ended a ban on women driving in September but the conservative kingdom’s male guardianship system requires women to have a male relative’s approval for decisions on issues like education, employment, marriage and travel plans…

In what the World Chess Federation (FIDE) called an“ historic agreement”, Saudi Arabia relaxed its dress code for the tournament, which has a total prize pot of $2 million.

This meant women would not need to wear the hijab or abaya — the loose-fitting, full-length robes that women are typically expected to wear. Instead, inside the venue, women could wear dark formal trouser suits and high-necked white blouses.

But these changes did not go far enough for Muzychuk. Instead, she has decided to boycott the tournament because the nation continues to oppress women, treating them as second-class citizens.

“I have refused to go,” Muzychuk said. “It was certainly quite difficult to take such a decision because I am a current world champion in these chess disciplines – rapid chess and blitz. So if I do not participate in this tournament, I will lose both titles.”

The Times of Israel has more on the story:

On Sunday, Moshe Shalev, the interim head of the Israel Chess Federation, told The Times of Israel that the seven players had not been granted visas, despite indications last month that they would make history by being the first representatives of the Jewish state to publicly take part in an event hosted by the kingdom, which does not officially recognize the State of Israel.

Seven Israeli players had filed requests for visas to participate in the games to be held in Riyadh on December 26-30, as part of the world rapid and blitz chess championships.

Saudi Arabia knew this would be a political hot potato for them as soon as they agreed to host the tournament. While the Saudi monarchy and Israel have a behind the scenes alliance against Iran, and there were rumors that heir apparent,  Crown Prince Mohammed bin Salman visited Israel for talks this past September, officially Saudi Arabia is at war with the Jewish State. The growing alliance aside, any public display of a loosening of tensions, especially when the government is easing up the religious restrictions may cause public rioting and a move to overthrow the crown (something Iran is trying to incite anyway).

If the players are not allowed to participate in the tournament, Israel will consider suing FIDE for the hateful treatment of their players.

ICF head Moshe Shalev said they would consider suing the World Chess Federation, an attempt to deter more discrimination against Israelis from happening in the future.

According to Aizenberg, the tournament’s winners can receive up to $2 million in cash prizes and therefore the ban “presents both economic and professional damage to your players.”

“And besides, it is our right to be treated as equal among all nations of the world,” he said.

“It is most outrageous that FIDE allows a state to agree to host an international championship, without promising to accept all athletes, regardless of their country of origin,” added Aizenberg

Saudi Arabia (and any other nation refusing access to players based solely on their ethnic/national heritage) should not be allowed to host such international competitive events. And in this case of Saudi Arabia, their acceptance of the hosting duties is a naive political blunder, that has put them in check-mate. They had a choice of hurting their reputation in the anti-Israel Muslim world, or in the world community. Part of Saudi Arabia’s status is based on the fact that the kingdom houses the holy city of Mecca and Medina, and thus the leader of the Sunni Muslim world. Therefore they made their choice on maintaining that position.