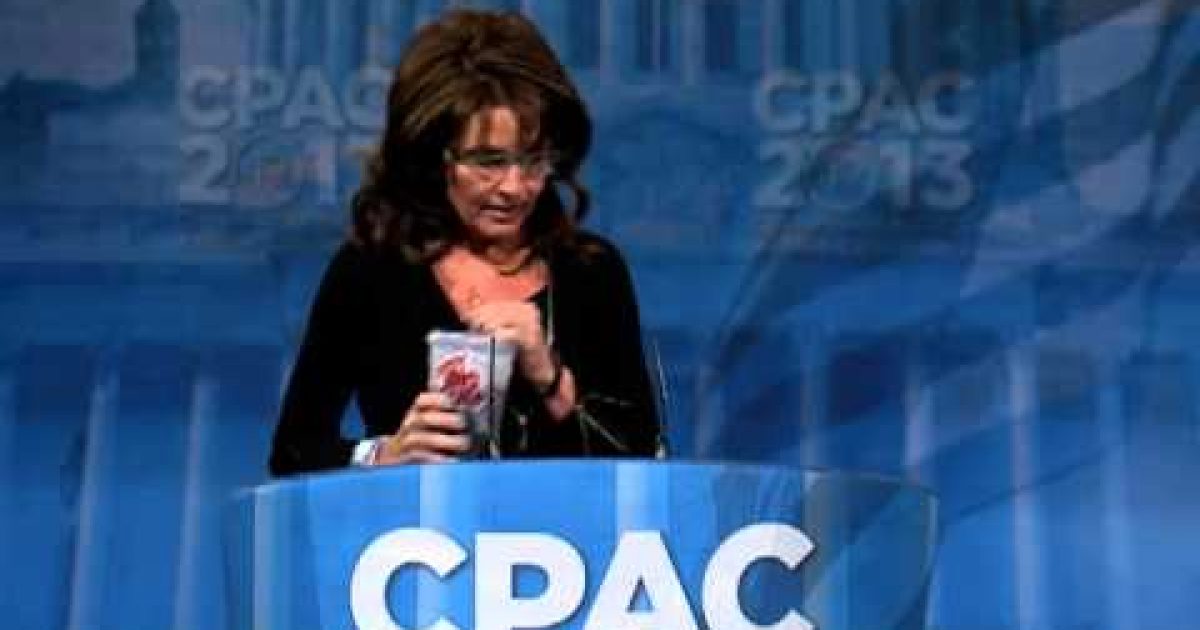 It started with a tease.  Sarah Palin was introduced and announced but Senator Ted Cruz came out.

Cruz who is the final Keynote Speaker of CPAC (later this afternoon), entered to cheers beginning by pointing how the former VP candidate drives the media Batcrap crazy, how she supported winning conservative senatorial candidates in 2010 and 2012 (including him) and how he owes his Senate seat to Sarah Palin.

Ms Palin came out to thunderous applause and began an address which unleashed by returning the complement commenting that Cruz came to DC chewed up barbed wire and spit out rust.  In her address Ms. Palin proved that she is no slouch herself at chewing up spiky fencing and spitting it out. Her speech attacked Obama, the GOP “old guard,’ and political consultants taking no prisoners (while throwing in a few jabs at the media).

Palin’s speech was thoroughly enjoyable– it was all  one-liners—designed to get cheers and laughs. However if she ever intends to run for office she will have to provide some vision and policy, some food for thought instead of entertainment.

Palin began pointing out she likes Texans like Cruz because  “they don’t mess around with our Second Amendment rights,” Following quickly with her first of many  memorable lines:

She justifiably chided the President with:

“Leaders take risks for the good of our country. Campaigners make promises they can’t keep”

and my personal favorite:

Mr. President you won…we accept it! Now step away from the teleprompter and do your job.

Perhaps her best and worst moment of the day was when spoke about the Christmas gifts she exchanged with her husband Todd.  She bought him a new gun, he bought her  a rack to hold guns on the back of her truck:

He’s got the rifle, I’ve got the rack

Palin has not announced her future political intentions, and I love funny boob jokes…then again no  sane person would ever consider me a candidate for any governmental position. I do not believe that the country is ready for a president (or senator for that matter) who tells “boob jokes.”

While the crowd was hooting about the speaker’s breast jokes, she reached down under the podium and pulled out a giant big gulp, saying to the cheers of the crowd.

She attacked the  GOP leadership with:

Even our guys in the GOP too often have a habit of reading their stage directions. Too scripted”

Today’s speech by Governor Palin was brilliant in pointing out the failures of the president, GOP Leadership, et al.  However it was not the speech of a leader.  A leader may start with attacks and great laugh lines…but in the end if they want to get elected they need to show some vision.

In the end Palin’s address was poison for a diabetic like me…it had no protean it was all dessert.

A video of her address follows: