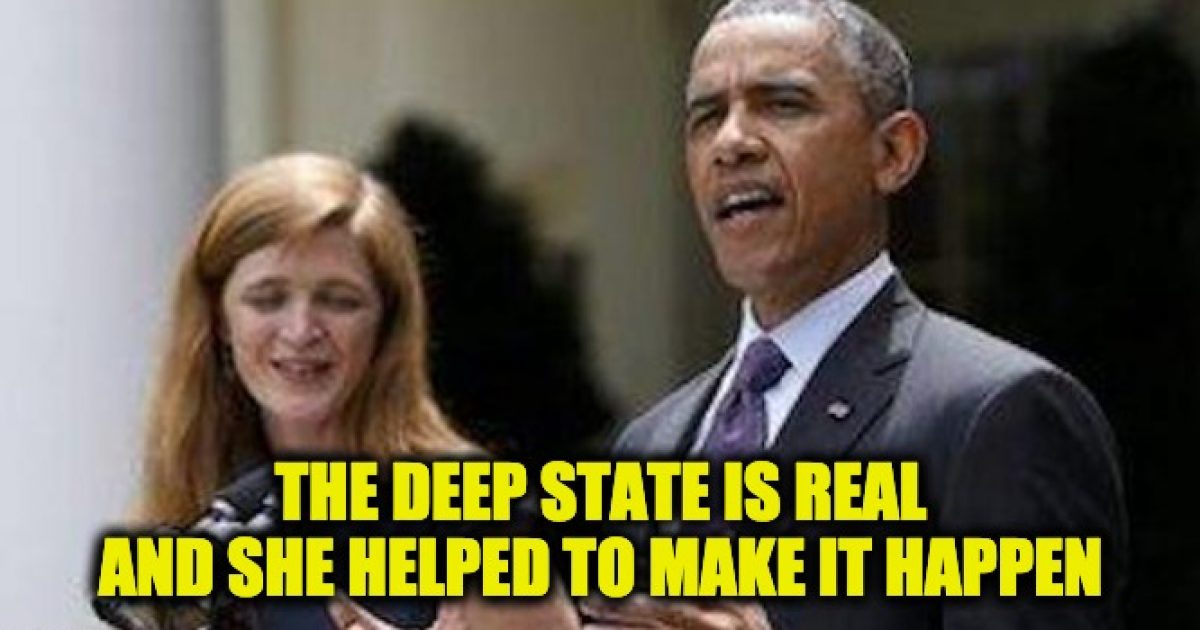 Apparently, when she wasn’t unmasking the names of Americans in intelligence reports, former U.N. Ambassador Samantha Power was using her government email account to incite the “deep state” with emails slandering Team Trump that to fellow Obama administration officials and other members of the liberal elite.

Two years ago Rep. Devin Nunes (R-CA) charged that three top members of former President Obama’s team of making hundreds of requests to unmask the names of Americans in intelligence reports. The requests were made during the election and transition period, and the names included members of the Trump Team. The three officials requesting the unmasking were Former CIA director and perjurer John Brennan, former national security adviser Susan Rice, and former U.N. ambassador and hater of Israel, Samantha Power

Another report  revealed Power was unmasking at an incredible pace

“[She] was “unmasking” at such a rapid pace in the final months of the Obama administration that she averaged more than one request for every working day in 2016 – and even sought information in the days leading up to President Trump’s inauguration . . . .”

Thanks to a  FOIA lawsuit won by the American Center for Law and Justice (ACLJ) which is run by Jay Sekulow who is one of the President’s attorneys, we now learn what else Power was doing in her attempt to sabotage the Trump presidency before it had even started

We warned you about the 73 Days of Danger – the final days of the Obama Administration, and this new evidence confirmed what we said all along. The Administration was fully engaged in attempts to do whatever they could to undermine the conservative agenda and the will of the American voters.  But it was far worse than we thought.

The emails ACLJ received includes email threads “to and between Power and her Counselor, Nikolaus Steinberg, just three days after the election in which Power actively discusses an “idea to seek maximum amplif[ication]” of her politically biased messaging.”

Steinberg sent Power a “Draft pitch email” for her to submit to 60 Minutes, but the draft is completely redacted in the materials the ACLJ received.

He suggested pitching 60 Minutes or CBS Sunday Morning a segment on the issue of refugees:

“with the hook being the foreshadowing that Trump and company may try to undo all of this.” Minutes later, Power sent an email to Bill Owens, the Executive Editor of 60 Minutes [He is now the Executive Producer of the show–in other words he runs it]: “We’re still reeling here, as you might imagine. My mission to the UN is a cabinet agency under President Obama, but will be demoted to something very different in January. Notwithstanding this, Tuesday’s results have given us an even greater sense of urgency to get our work done in our last few months. 70 good long days left!”

Further in the same email to Owens may be part of her motivation for her attacks. “she again references the special status she had under President Obama as a cabinet-level position, one we now know came with vast unmasking authority. She stated, “I was also being informed that the job of US Ambassador to the UN will be downgraded by the Trump Administration to non-Cabinet level (typical of Republican administrations, but we have never had so many of our core interests embedded here).”

Power goes on in this November 11th email to pitch a 60 Minutes episode to help lay a public foundation to undermine the incoming Administration. She wrote:

I am not sure exactly what I am pitching, but it seems there could be something interesting to show through USUN [ Breakingnews listserve] about this waning multilateral moment for the US, how we use these last two months, what we are trying to defend, how we are consoling other countries, etc. I wondered if there could be something in this that would hit home for viewers, even or perhaps especially those who support Trump. Let me know if you would like to brainstorm. The conversation continues four days later with Owens acknowledging and agreeing to help pitch the piece. He further stated, “I can only imagine the conversations you are having with some of our allies now and I would love a chance to brainstorm.”

Allies? In other words, 60 Minutes is a vehicle for the anti-Trump left.

But don’t think it was only the media. Three days later, on November 14th, Power received an email from the USUN list with a Reuters article, “Trump looking at fast ways to quit global climate deal: source.”  She forwarded the report to Jonathan Finer (Director of Policy Planning, DOS) with the message:

“Lord help us all. How are you holding up?” Finer responds, “And the below [referring to the article] is just one of many grim things we have to look forward to.” Power then responds to Finer, but this reply has been completely redacted.

A month later, Powell seemed to start getting involved with the Russia collusion narrative:

On December 14th, Steinberg replies to an email Power sent under the subject line “tom friedman today – see last para quote by larry diamond” (this email appears from the production to contain no other information). However, Steinberg’s reply to Power contains a December 9th article from The Atlantic by Larry Diamond entitled, “Russia and the Threat to Liberal Democracy,” which furthers a narrative questioning the legitimacy of the election.

His commentary with the article simply states, “Indeed. Saw it and read Diamond’s piece Monday when doing some research. It’s a solid piece. Pasted it below and will have it added to your book.” This occurred during the height of Power’s “unmasking” and calls into question what “research” and “book” he was putting together for her.

On December 22, 2016, in an email to Ben Rhodes (Obama’s Deputy National Security Advisor for Strategic Communications) who was also implicated in the unmasking requests and bragged about lying to the media about the Iran Deal, Powers sent an article entitled, “Applied pressure: Donald Trump isn’t even president yet, and he’s already making waves at the U.N.” Which talked about then President-Elect Trump’s efforts to kill the anti-

The article discusses President-Elect Trump’s diplomatic efforts to kill the anti-Israel Security Council resolution 2334, which was passed during the final days of the Obama administration. When it came to a vote rather than veto the anti-Israel resolution, the Obama administration abstained allowed it to pass. The Obama/Power action had the same effect as an anti-Israel UN Vote. In her email to the self-admitted liar Rhodes, Power called Trump’s opposition a “lack of understanding of history.”

This exchange confirms what The Lid had been warning about since Obama announced his candidacy in 2007, Barack Obama was intentionally attempting to undermine the State of Israel. His final delegitimization push was “a cowardly act at the U.N.”

Now we know, the same time the administration was “displaying their utter disdain for the incoming President.”

Then, just three days before the inauguration, Power delivered her final remarks as U.S. Ambassador to the U.N., addressing “Russia: The Threat, the International Order, and the Way Forward.” The day before her speech, Steinberg, counselor to the ambassador, wrote in an email to Power, stating, “Trump’s interviews over the weekend with the foreign press questioning R sanctions and value of NATO will be very helpful for relevance of speech.”

Finally, and maybe most significantly, the day she delivered that speech – again just three days before the inauguration – an email chain under the subject line, “Russia speech 1am version,” between Power, Rice, Rhodes, and others is almost completely redacted. The flurry of email activity occurs between 1:25 a.m. and 1:45 a.m., and demonstrates that the three key players in the unprecedented “unmasking” were literally working around the clock in the final days of the Obama Administration.

Then, just hours later, after the speech, in an email chain under the subject line, “Russia,” between Halie Soifer (Power’s Policy Advisor), Steinberg, and Power sent her “as delivered” remarks to two USUN listserves. However, each of the subsequent replies, including two from Power herself, are completely redacted.

What is the Deep State hiding?

Maybe the ACLJ should send the emails to the House Oversight Committee because these emails seem like a severe violation of the Hatch Act.

The ACLJ promises to challenge the redactions, so fasten your seat belts, because there will be more deep-state truth.