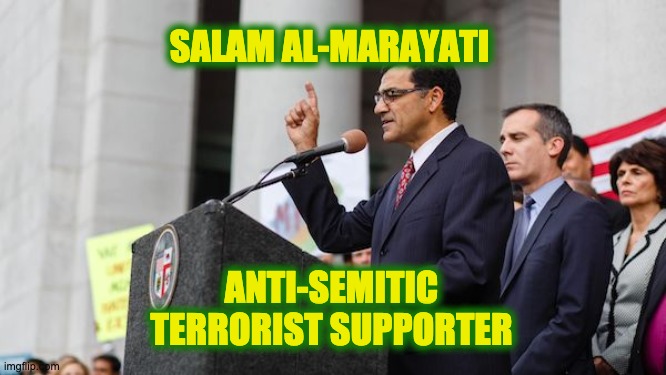 Salam Al-Marayati, an anti-Semitic, terror-supporting,  Muslim-American extremist has been disinvited from a Jewish-organized civil rights panel, and Jewish liberals are denouncing his removal as a suppression of free speech.

Salam Al-Marayati, longtime president of the Muslim Public Affairs Council (MPAC), was originally invited by a group called Jews United for Democracy to speak as part of its anti-Trump panel on “After Four Years of Division, Tension, and Bigotry—Now What?” The panel itself casts doubt about Jews United for Democracy’s Jewish creds. After all, its purpose was to trash the most pro-Jewish and pro-Israel president in history. If anyone has created division, tension, and bigotry, Bigotry against Jews that is, it’s Al-Marayati.

Al-Marayati’s organization, MPAC, publicly defended infamous French Holocaust-denier Roger Garaudy, after Garaudy was fined by the French government for his denial activities. MPAC was named by the ADL as one of the top ten anti-Israel groups in the country.

Al-Marayati refuses to call Hezbollah a terrorist group. “I don’t think any group should be judged 100% this or that,” he says. “I think every group is going to have . . . its claim of liberation and resistance.” He has similarly justified Hamas‘ existence as a political entity that promotes social programs and “educational operations.” “Yesterday’s terrorists in the Middle East are today’s leaders,” he says.

Al-Marayati was a longtime member of the small editorial board of The Minaret, a magazine closely associated with MPAC leaders, which in the 1990s and early 2000s repeatedly published grotesque political cartoons depicting Jews and Israel controlling the American government. That theme was consistent with Al-Marayati’s assertion that the U.S. “is in full partnership with Israel. Where Israel goes, our government follows.”

“The United States has done a lot of dirty work that has served the interests of Israel. It destroyed Iraq. It supported the destruction and crippling of Egypt. It has crippled the Gulf. And now, it is looking to Iran as the next target for crippling and destroying. Who is driving our foreign policy — President Obama or Prime Minister Netanyahu?”

Al-Marayati has had a long association with the white supremacist William Baker, the onetime chairman of the extremist Populist Party, founded by a late neo-Nazi leader / Holocaust denier named Willis Carto, in 1984. MPAC has invited Baker to speak at several events. At MPAC’s “United for Al Quds Conference” in 2002, Al-Marayati introduced and praised Baker.

Comparing Israel to Nazi Germany is standard fare for Al-Marayati. For example, writing in the notoriously anti-Israel magazine Washington Report on Middle East Affairs in June 1994, Marayati asserted: “Just as Hitler forged a conflict between Judaism and Christianity, apologists for Israel crave for Islam to be at odds with both Judaism and Christianity.”

Let it be noted that the U.S. government, together with the 30 other member-states of the International Holocaust Remembrance Alliance, uses a definition of antisemitism which states unequivocally that “Drawing comparisons of contemporary Israeli policy to that of the Nazis” is anti-Semitic.

Al-Marayati’s ugly record of Jew-hating and Israel-bashing also includes his declaration, immediately after the 9/11 terrorist attacks, that ”If we’re going to look at suspects, we should look to the groups that benefit the most from these kinds of incidents, and I think we should put the state of Israel on the suspect list because I think this diverts attention from what’s happening in the Palestinian territories so that they can go on with their aggression and occupation and apartheid policies.”

At the same time, Al-Marayati has a long record of justifying or condoning Islamist terrorism. He has equated America’s struggle for independence from Britain with Islamic fundamentalism. He denounced then-Senator Joe Biden’s Counterterrorism Act of 1995. He accused the U.S. of committing “a terrible act of terrorism” by sanctioning Saddam Hussein’s Iraq. He condemned the U.S. for striking at terrorists in Sudan and Afghanistan.

Here’s what Al-Marayati’s MPAC had to say following the March 1997 suicide bombing in Tel Aviv that left three dead and 48 wounded: “Because the Palestinian people have no avenues to redress their grievances, some of them have been pushed beyond the margins of society and have adopted violent reactions to express their despair and suffering.”

Al-Marayati’s occasional statements condemning terrorism are meaningless because he defines Israel’s self-defense actions as terrorism and Palestinian Arab violence as freedom-fighting. Here’s how MPAC has put it: “Terrorism is wrong: Israeli occupation is terrorism and oppression. American policy must be based on the recognition that no people will remain passive under foreign occupation and military aggression. The Palestinian people are no different…The uprising is a spontaneous, collective reaction to the continued illegal and immoral Israeli occupation of the Palestinian people and their land.”

Likewise, regarding Hezbollah, Al-Marayati has said: “If the Lebanese people are resisting Israeli intransigence on Lebanese soil, then that is the right of resistance, and they have the right to target Israeli soldiers in this conflict. That is not terrorism. That is a legitimate resistance. That could be called liberation movement, that could be called anything, but it’s not terrorism.”

That’s why then-Congressman Richard Gephardt (D-Missouri) withdrew the nomination of Al-Marayati to serve on the National Commission on Terrorism in 1999. Al-Marayati’s record of apologizing for terrorism is lengthy, indisputable, and nothing less than damning.

In recent years, Al-Marayati has softened his tone in the hope of trying to re-enter the mainstream. But sometimes, he just can’t resist showing his true colors. Last year, he and MPAC signed a public letter defending Congresswoman Ilhan Omar, following her statements accusing Jews of bribing members of Congress to support Israel.

I guess Al-Marayati’s support for Rep. Omar is no coincidence, considering that Omar’s statements sound a lot like what Al-Marayati and his organization have been saying about Jews for the past three decades. Birds of a feather flock together, after all.

Even though they eventually canceled his invitation, by Inviting the anti-Semitic and anti-Israel Salam Al-Marayati in the first place, Jews United for Democracy made the words of Ze’ev Jabotinsky ring more true than ever: