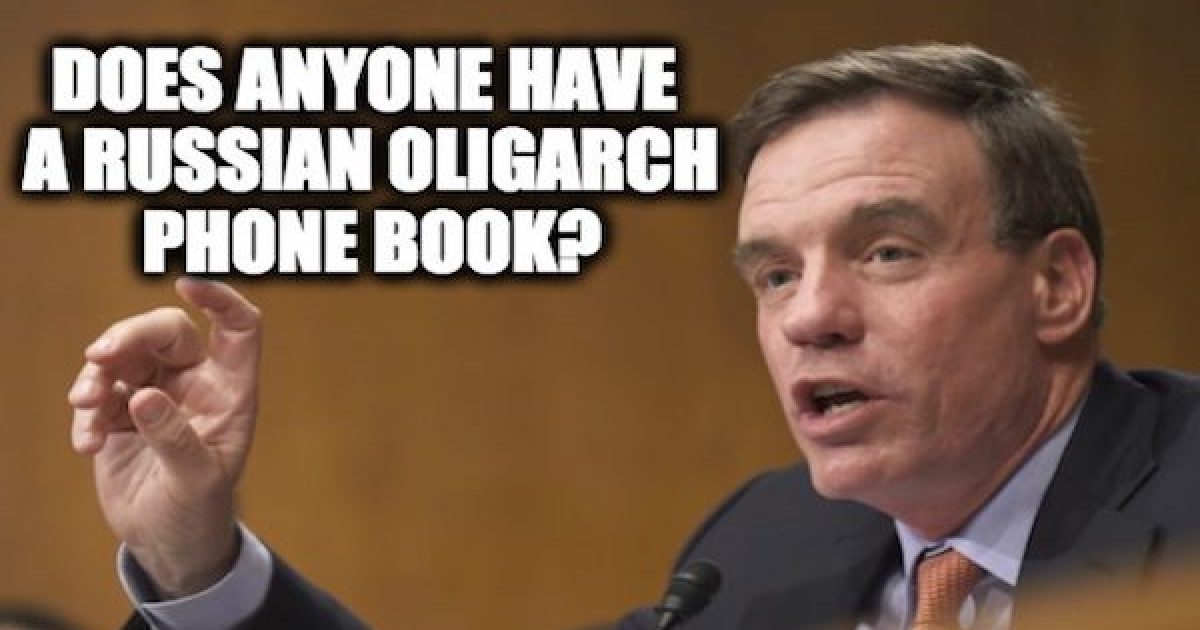 On Tuesday it was revealed that special prosecutor Robert Mueller may have a conflict of interest in the Russian election meddling case because he supervised a covert operation that sanctioned Russian oligarch Oleg Deripaska helped to fund and lead. Back in February a Fox News report linked Deripaska to Sen. Mark Warner, (D-VA) the top Democrat on the Senate Intelligence Committee which investigating alleged collusion between Donald Trump and the Russians.

It was FNC’s’ Ed Henry who reported that Warner, “had extensive contact last year with a lobbyist for a Russian oligarch [Deripaska] who was offering Warner access to former British spy and dossier author Christopher Steele…”

According to a series of text messages (embedded below)

“Chris Steele asked me to call you,”  Adam Waldman, a lobbyist for Russian billionaire Oleg V. Deripaska, said on March 16, 2017.

“Can you talk tomorrow want to get with ur English friend,” he said on March 20.

“I spoke to him yesterday,” Waldman said in a reference to Christopher Steele.

“We have so much to discuss u need to be careful but we can help our country,” Warner told  Waldman in a text message sent March 22, 2017.

Steele is the former British spy who put together the anti-Trump dossier of still unproven information that was used by FBI and Justice Department officials to get a FISA warrant to conduct surveillance of former Trump adviser Carter Page.  The FBI did not tell the FISA judge that Trump’s opponent Hillary Clinton paid for the dossier. Nor did they tell Trump when they first told him about the dossier months later.

While he eventually testified before the Senate committee at the time of Warner’s surreptitious contact, Christopher Steele was refusing to testify:

Secrecy seemed very important to Warner as the conversation with Waldman heated up March 29, when the lobbyist revealed that Steele wanted a bipartisan letter from Warner and the committee’s chairman, North Carolina Republican Sen. Richard Burr, inviting him to talk to the Senate intelligence panel.

Throughout the text exchanges, Warner seemed particularly intent on connecting directly with Steele without anyone else on the Senate Intelligence Committee being in the loop — at least initially. In one text to the lobbyist, Warner wrote that he would “rather not have a paper trail” of his messages.

Marco Rubio tweeted that Mark Warner told the committee about contacts with the Deripaska lobbyist about Steele four months before the Henry report, which meant that Warner kept things secret from the intelligence committee for eight months. Why?

Keep in mind Deripaska was banned from entering the country because of his organized crime ties but Mueller’s FBI helped him to get into the Country.  In fall 2009, according to U.S. entry records, Deripaska visited Washington on a rare law enforcement parole visa. And since 2011, he has been granted entry at least eight times on a diplomatic passport, even though he doesn’t work for the Russian Foreign Ministry.”

Did Warner know about the oligarch’s ban at the time he reached out to the lobbyist? Did he even check before he asked for a favor?

The text messages are all marked “CONFIDENTIAL” but and are not classified, the Fox report added:

Although the Fox News article doesn’t mention Russian president Vladimir Putin, Deripaska is close with the head of state

A Los Angeles Times profile of Deripaska from 2017 described him as “tight” with Putin and said that the two men’s ties were “so close that Russia’s foreign minister asked U.S. secretaries of state for more than a decade, including as recently as last year, to help Deripaska secure a visa to enter the United States, the Washington Post reported [according to Tuesday’s post it was the FBI who helped him enter this country].

What hypocrisy!!! One hand, the Democrats, go after just about everyone in the administration who ever went to a movie that took place in Russia or had a Black Russian at a bar. NO ONE in the party pointed out that a senior Democratic Party senator had regular exchanges with a Russian oligarch with ties to Putin. Rep. Adam Schiff didn’t leak it.  Mark Warner didn’t disclose this secret correspondence to his colleagues on the Senate intelligence committee for eight months,  kept it from the American people, and that’s okay.  No, it’s not okay,   the Democratic Party is very selective in their witch-hunt,

Here’s a video of the report: