Brother Can You Spare A Rouble? 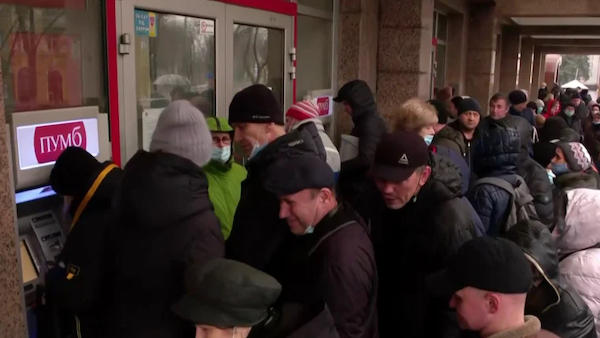 What’s happening with Russia’s economy is  reminiscent of the U.S. in 1929 when there was a run on American banks:

Vladimir Putin, once a man feared for his cunning and his savvy geopolitical understanding, has been reduced to a joke – even in the eyes of his own people. Many of his former colleagues are saying he’s gone nuts.

Putin’s foolish attempts to take the sovereign nation of Ukraine were poorly calculated, both militarily and in the realm of optics, as the rest of the civilized world appears to be turning against him in a hurry.

This has led to a number of devastating sanctions being placed on Russia’s banking and financial systems, which, in turn, has Russian citizens fearing for the future of their economy.

Ordinary Russians faced the prospect of higher prices and crimped foreign travel as Western sanctions over the invasion of Ukraine sent the Rouble plummeting, leading uneasy people to line up at banks and ATMs on Monday in a country that has seen more than one currency disaster in the post-Soviet era.

The Russian currency plunged about 30% against the U.S. dollar after Western nations announced moves to block some Russian banks from the SWIFT international payment system and to restrict Russia’s use of its massive foreign currency reserves. The exchange rate later recovered ground after swift action by Russia’s central bank.

And these sanctions were simply enormous, in terms of the actual cash effect.

But the economic squeeze got tighter when the U.S. announced more sanctions later Monday to immobilize any assets of the Russian central bank in the United States or held by Americans. The Biden administration estimated that the move could impact “hundreds of billions of dollars” of Russian funding.