Joint Russian-Chinese Air Ops: A Can Of Strategic ‘In Your Face!’ (Video) 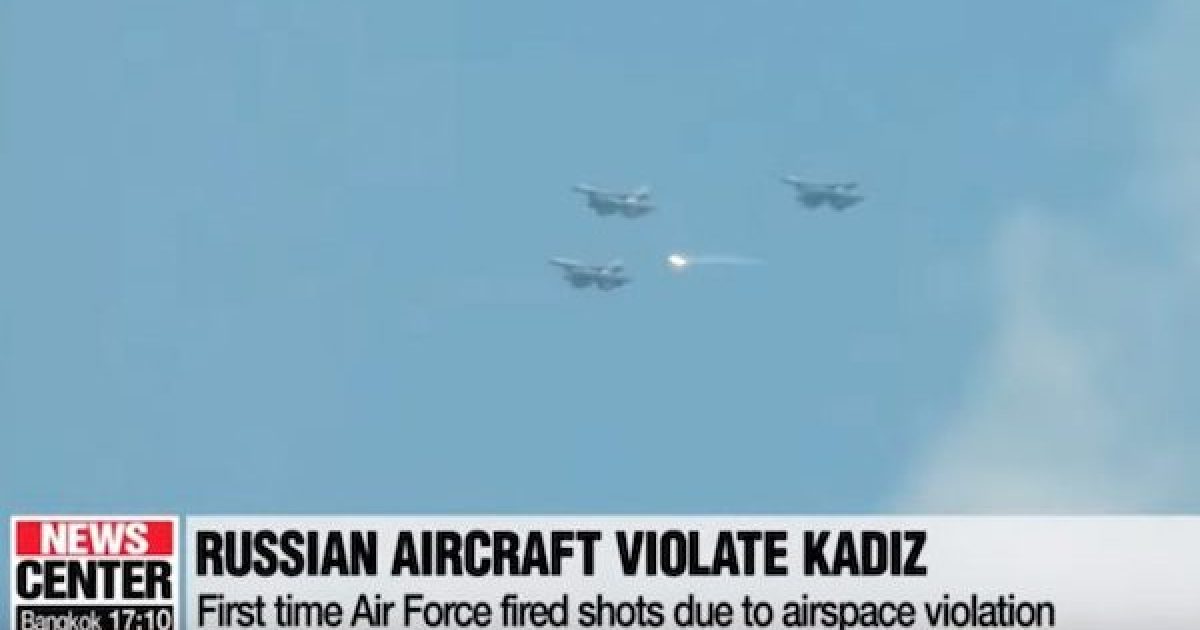 If you need a key to understanding why South Korea would respond to a claimed air space violation by a Russian aircraft with 360 machine gun rounds from some of the 18 jet fighters scrambled in reaction, here it is.

The air space violation was part of a joint joy-ride on 23 July 2019 by Russian and Chinese strategic bombers around the Far East.

That would be Russian and Chinese strategic bombers: the ones that form a leg of each nuclear-armed nation’s strategic “triad” (air-launched, ground-launched, and sea-launched nuclear weapons).  The Russian bombers were flying in conjunction with Chinese H-6 bombers, which South Korea said were the variant capable of delivering nuclear payloads (presumably the H-6K, the platform that serves as China’s strategic bomber).

The aircraft said by Seoul to be in actual air space violation was an airborne command and control platform, an A-50 “Mainstay” (NATO name), whose role is directing air combat.  (The A-50 is similar to the U.S./NATO E-3A Sentry.)  It wasn’t one of the bombers.  A Chinese KJ-2000, the A-50’s counterpart, was also reported to be involved in the air operation.

But the joint demonstration by the bombers is what defined the nature of the activity on Tuesday.  The Western media have been referring to the bombers’ flights as a “joint patrol,” but without an appreciation for the radically transformative implication of Russian and Chinese strategic nuclear-force assets “patrolling” jointly.

Let’s not call it a “patrol” just yet.  A “patrol” of this kind would be intolerable in the context of the existing status quo.  A patrol signifies an established purpose and designated geographic space to be revisited in service of that purpose.  If Russia and China have a common purpose for strategic demonstrations in the Far East, demonstrations that for obvious reasons send South Korea and Japan above sphincter DEFCON I, they (at a minimum) haven’t declared it.

Be clear on this.  Flying Russian Tu-95M bombers and Chinese H-6 bombers around near other nations’ air space sends the signal that Russia and China can reach out and touch those nations with standoff air-launched cruise missiles armed with nuclear warheads.  And that’s just if the bombers come within missile range of those nations: the range of the AS-15 (Kh-55) for the Russian bombers; soon if not currently the CJ-20 for Chinese H-6K bombers.  (The CJ-20, an air-launched variant of the CJ-10, with a range of about 1,100 nautical miles, was estimated to reach operational capability by 2018, but there are no open-source updates to confirm it.)

But on 23 July, the Russian and Chinese strategic bombers also made a point of jointly entering South Korea’s declared ADIZ (Air Defense Identification Zone); i.e., intentionally, in concert, crossing a line South Korea has declared to be militarily sensitive, with the highest-profile weapon systems.  ADIZes are a hot-button issue in Northeast Asia, and China is the reason for that.

In 2013, China declared a new ADIZ in the East China Sea, which overlaps the preexisting ADIZes of both South Korea and Japan.  In fact, the declared Chinese ADIZ includes air space disputed between Japan and China (over the Senkaku Islands).  It’s a highly sensitive issue and a basis for automatic provocation. 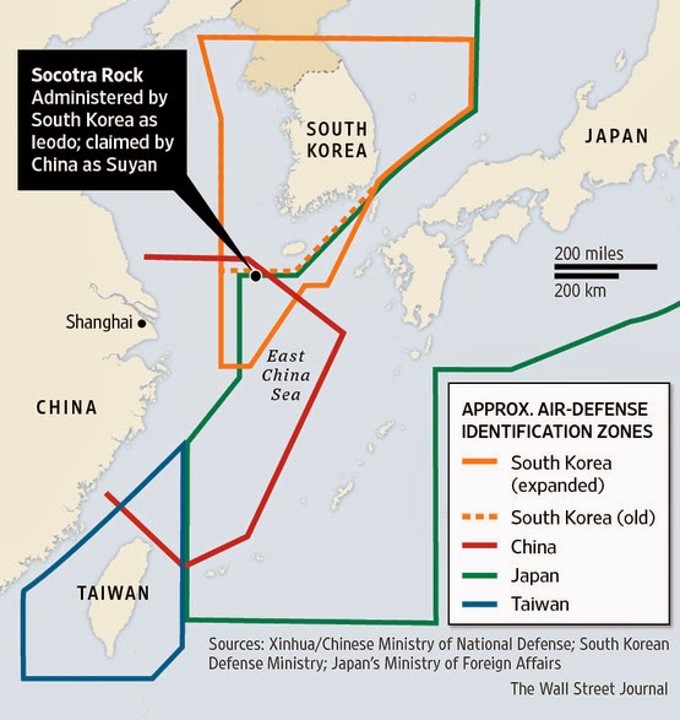 The U.S. doesn’t recognize China’s ADIZ and has operated military aircraft in it as a signal of non-recognition, including a B-52 flight through it as recently as January 2019.  The first such flight through the unrecognized ADIZ was made in 2015; this isn’t a “Trump” thing.

It isn’t a high-handed U.S. move either; it’s a move to counter peremptory challenges – like too many of China’s – to the status quo.  Japan’s ADIZ, the one with which China’s has the most overlap, has been declared for decades.  The U.S. would not, in any case, simply honor a newly declared ADIZ that stomped on the long-accepted boundaries delineated by another nation.  But Japan is a treaty ally; the Chinese ADIZ includes air space claimed by Japan, as well as overlapping Tokyo’s ADIZ; and China declared it without consultation with Japan.

A similar, although not identical, set of factors exists with the overlap of the Chinese-declared ADIZ and South Korea’s ADIZ.  (Which is why the Russian defense spokesman cited in the Wall Street Journal report adverted promptly to Beijing’s beef with U.S. challenges to the Chinese ADIZ declaration.)

There’s no reason why China shouldn’t have an ADIZ.  But if China wants it to extend into Japan’s or South Korea’s ADIZ, Beijing should negotiate that with Tokyo and Seoul, rather than declaring it unilaterally and embarking on a career of military provocations.

Meanwhile, on Tuesday, the A-50 operating during the bombers’ flights went even further than the ADIZ provocation and entered the air space South Korea complained about, over an island in the Sea of Japan (or East Sea) which is under Seoul’s effective administration but is disputed between South Korea and Japan.  (Note: while the messaging on other topics is dubious, the Russian video below has a good view of where the island is located, and where the Russians claim they operated in relation to it.)  The air space penetration triggered (literally) the South Korean response with hot lead, and it also triggered a diplomatic competition between Seoul and Tokyo, with Japan asserting that it was the Japanese prerogative to complain about the air space violation.

There was a reference in the South China Morning Post to “fighters” (i.e., Russian and/or Chinese fighter aircraft) possibly being involved in this day’s work, but it’s not clear if that is accurate.  Fighters aren’t mentioned in the other coverage.

It would make sense if fighters were aloft, partly because they would serve as escorts for the bombers, and partly because there would be more reason to have an A-50 Mainstay in the mix if the operation involved fighters.  An A-50 is not a typical adjunct to a strategic bomber flight.

That said, however – and there’s a lot more that could be said about the operational features of this event – the real significance lies in the fact that nuclear-capable strategic bombers were used for a joint, highly provocative demonstration by Russia and China.  (The aircraft was not reported to be loaded with weapons, but that’s not the point.  They typically aren’t, for such flights.  The point is the strategic demonstration, which in this case is about intimidation.)

For interest, the Russian version of the event is recounted here (with subtitles) and points fingers in Russia’s inimitable fashion at South Korea. I’d keep that in mind; it seems to be a theme with this new move by Beijing and Moscow.  It’s looking like a pile-on at the moment.

If fighters had been used for the provocation of ADIZ and air space penetration, it wouldn’t have had the same impact.  It’s the use of strategic bombers on a joint mission that kicked this over the top.  The A-50’s presence can also be read as a warning that Russia and China are ready to fight this regional space comprehensively, in a massed air war.

Whatever Japanese and Korean are for Whisky Tango Alfa Foxtrot? – There’s probably a lot of it going around in war rooms and command centers right now.  The U.S.  shouldn’t be far behind.  The big-flick take-away for Washington from Tuesday is joint operations by Russian and Chinese strategic triad forces.  The rest, while important in its own right, is geographic circumstance.