Russia Kicks Off Fight For Idlib, Syria With Strategic Inside Slider 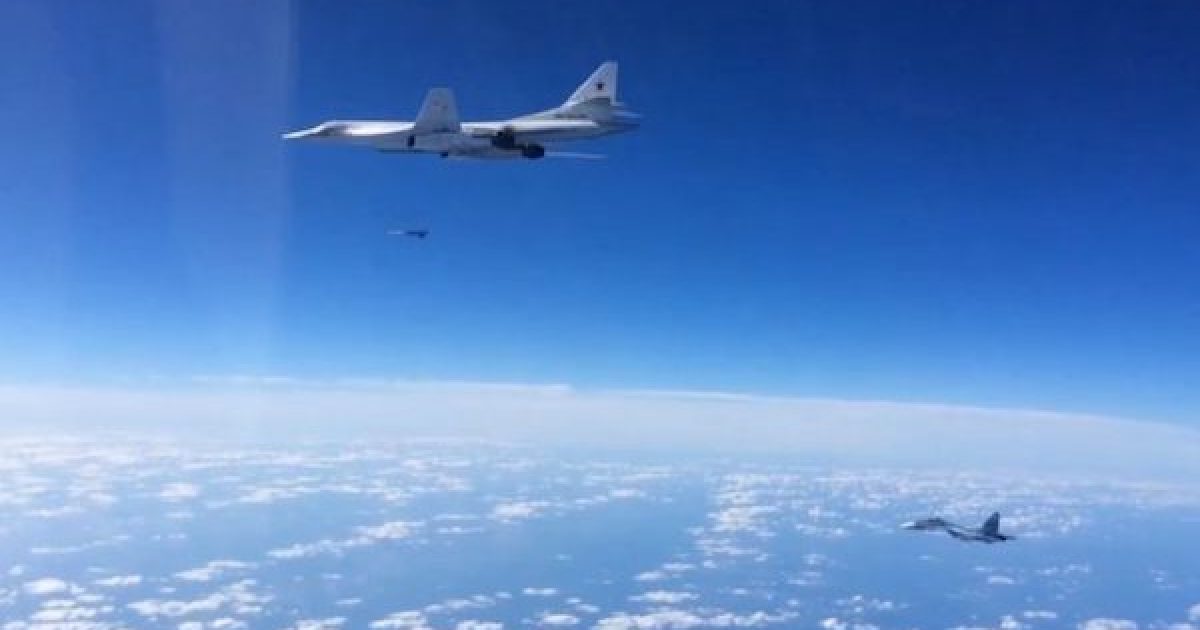 In the week leading up to Saturday’s Russia/Iran/Syria assault on Idlib – the last holdout province where rebels and ISIS fighters are holed up in Syria – Russia conducted a major exercise off the Syrian coast in the Mediterranean.

The size and scope of the naval portion of the exercise were indeed noteworthy.  With a reported 26 ships involved and live fire with large-caliber naval guns as well as deck-mounted machine guns, it was an impressive display.

The Russian navy has actually participated in significant naval engagements in the Eastern Mediterranean before.  But not for nearly 200 years.  The last game-changer engagements occurred in EastMed during and shortly after the Napoleonic wars, when Imperial Russia was driving down a stake – localized but significant – as a defender of Greek independence.  (Russia had an extensive prior history of maritime activities and influence in the Aegean over the preceding century.)

Russia’s reach through the direct route from her southern rim to the Med has always been contingent, subject to the geopolitical constraints imposed by her neighbors in the Black Sea and the littoral nations of the Hellespont and Aegean.  After the new Soviet government pulled out of World War I with the Treaty of Brest-Litovsk (March 2018), Russia had no meaningful role in ordering post-war arrangements for the defeated Ottoman Empire, and from 1918 to 2016 was effectively blocked on that axis, by consortiums of Western powers, from militarily useful access through the corridor to the Med.

But Russian moves in 2015-2016 previewed a significant shift in that century-old geopolitical condition.  And last week, in 2018, the preview became a reality.  On 5 September 2018, Russian Tu-160 strategic bombers flew, apparently for the first time ever, from southern Russia to the Med through Southwest Asia: Iran, Iraq, and Syria.

In the age of flight, it has been a core security principle of the U.S.-British alliance (in World War II) and the NATO alliance that Russia must not have free rein to execute military thrusts across Southwest Asia and/or Southeast Europe into the Eastern Med.  The Truman Doctrine, adopted in 1947 as one of the earliest pillars of post-1945 U.S. policy, was premised on just this principle.

(Winston Churchill, a student of geostrategic history, was leery of Russia decades before that, attempting in both World Wars to shape Allied policy to thwart Russian advances toward the Med,)

U.S. policy has long respected Russia’s right to secure access to the Med for all peaceful purposes.  Our concern is the destabilizing effect on the entire region if Russia can prosecute military aggressions through the direct corridor from her southern provinces to the Med.

And it was visible more than two years ago that Russia was laying the groundwork for such military access.

Moscow signaled in 2015, just two months after overtly entering the Syrian civil war as a participant, that one of Putin’s goals was to establish a principle of operating Russian strategic forces in the Med.  In November 2015, Tu-160s mounted a showy, and excruciating, 8,000-mile round-trip mission to Syria, flying from extreme northwest Russia around Europe and across the entire Mediterranean to get there.

David Ceniciotti, the “Aviationist,” noted at the time that the Tu-160s were armed on this mission, and reportedly launched KH-101/102 Raduga cruise missiles at targets in Syria.  Russia has rarely flown bombers with offensive armaments through international airspace near NATO or Far Eastern nations, as such flights are provocative and subject to misinterpretation.  Doing it in November 2015 was actually a very big deal, regarding signal and precedent, but one that went largely unrecognized in the Western media.

Writers at the time observed that the bombers took a long way around, but wrote as if it would have been usual for those bombers to go through the path across Southwest Asia.

But it would not have been.  At the most, Russian strategic bombers probably launched long-range cruise missiles at Syria from positions over the Caspian Sea.  Russian ships had made such launches from the Caspian Sea in early October 2015, and thus demonstrated the path through the airspace for cruise missiles 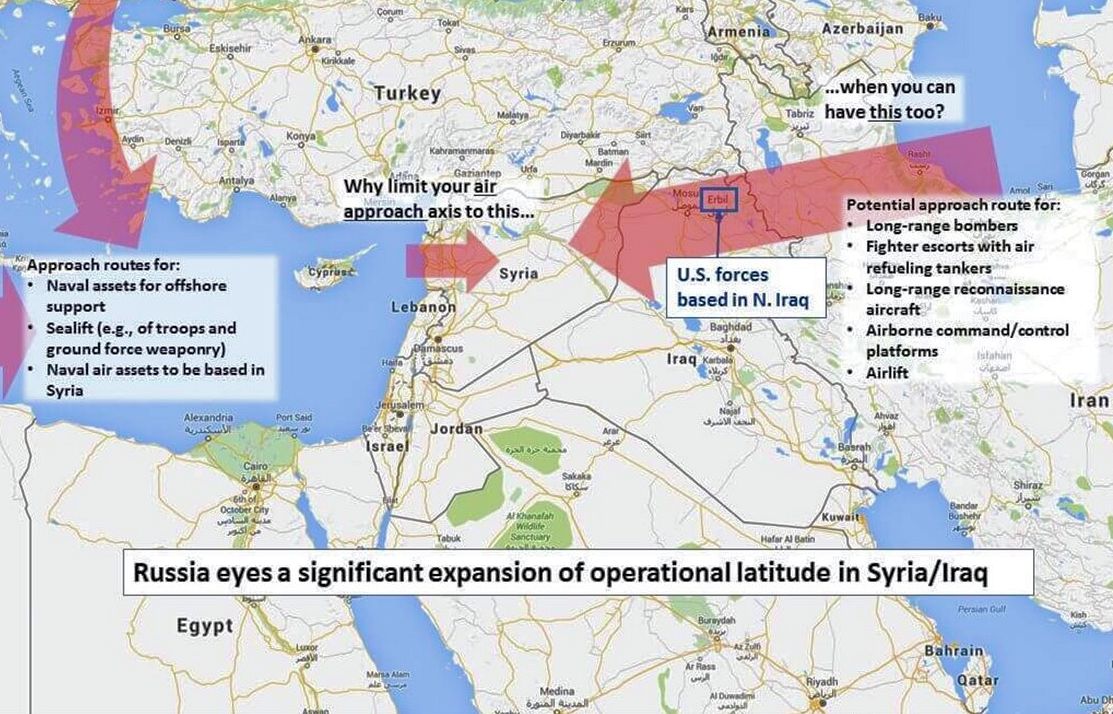 As Ceniciotti recounted shortly afterward, in November 2015, Russia announced that strategic bombers had been used in the air war on Syria: both Tu-95 Bear H bombers and Tu-160s.  Theater bombers — Tu-22M Backfires — were also involved.  This announcement was just two days before the 8,000-mile flight around Europe.

But there was no indication those aircraft actually flew into Syrian airspace or even left the airspace over the Caspian Sea.  (At least some of them departed for their missions from Mozdok in southern Russia, according to the Russian press release.  Ceniciotti points to a report that the remains of a KH-555 cruise missile were found in Syria afterward — a long-range air-launched missile, used by the strategic bombers, that could have been, and probably was, launched from a position over the Caspian.)

The Russian statement was overt and emphatic about the contribution of the heavy bombers to the Syria mission.  But it was silent on the route used, and how close the bombers themselves came to Syrian airspace.  In each case, the weapon used could have been and presumably was a long-range cruise missile.

Unarmed Russian military transport planes, meanwhile, and other support aircraft (like the Tu-214 intelligence collector depicted below, in 2016), flew on the inside route from Russia to Syria, as did jet fighters and tactical bombers deploying for local operations to the Russian air base at Hmeymim in Syria.  But there was no evidence Russian bombers were flying combat missions from Russia into Syrian airspace via the inside route.

That development came later.  In August 2016, Russian Tu-22M Backfire theater bombers used Hamadan airbase in Iran as a waypoint for a strike mission into Syria from southern Russia.

I noted the exceptional significance of that at the time.  It was an indication that the Truman Doctrine was dead, and a major premise of NATO security no longer operative.  (Note: I am linking to archived copies of my old posts from 2015 and 2016, as they still offer some of the original maps.  Those maps were lost at the live posts in an image database purge a few months ago, and some are irrecoverable.  Not all the maps are still there in the archived posts, and for some, you will have to click to bring them up.)

Last week, the Russian project that started in November 2015 was apparently completed.  Having met with no political-level pushback from 2015 to 2018, Putin’s strategic bomber force flew an “exercise” mission into Syria on the inside route across the Caspian Sea, Iran, and Iraq.

#Drums_of_war
On the other hand, three type Tu160 aircrafts of the Russian Air Force toured the skies of #Syria from #Russia and then returned to their bases.#USA #NATO #Iran #Israel #Turkey pic.twitter.com/rfISntlz1V 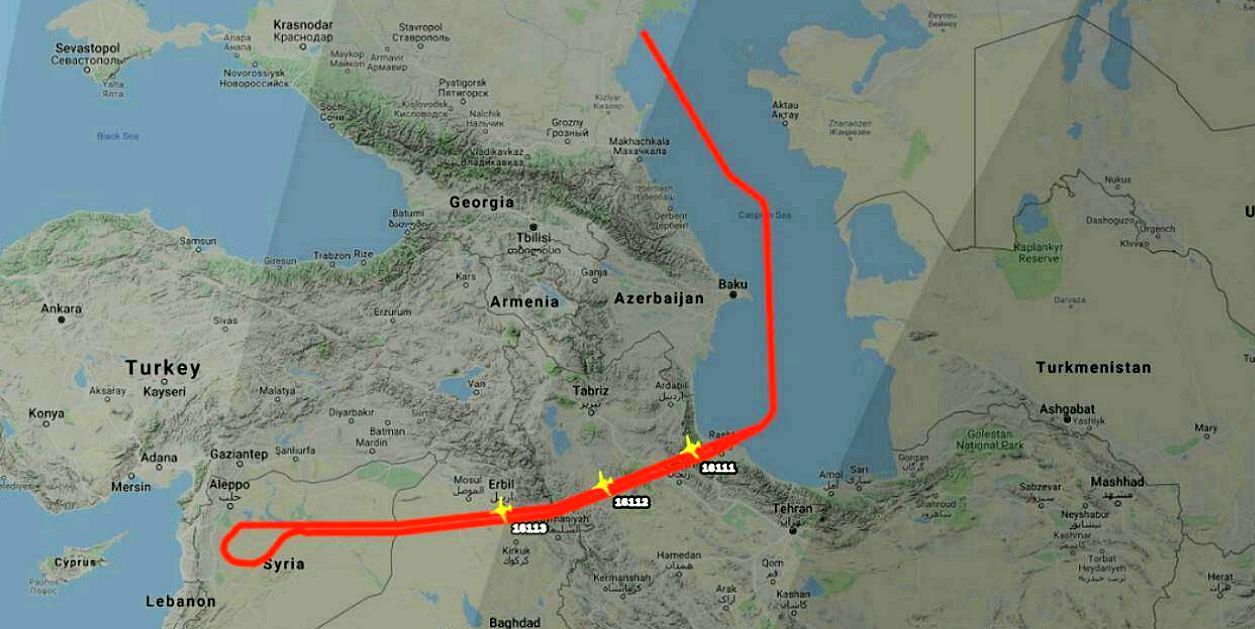 In this case, Russia heralded the mission differently from the rhetoric of 2015.  Instead of emphasizing that the bombers were operating against Syria, the Russian press announcement last week tied them to the exercise in the Mediterranean, which took place before the assault on Idlib was launched.

That should be read as Russia signaling that the “inside slider” access to the Med will be used for purposes more significant than merely affecting the fight in Syria.

And instead of merely remaining silent about the path of the aircraft, the Russian defense ministry said this (Sputnik link, above):

“The aircraft carried out a 10-hour flight over a low-level terrain in difficult weather conditions and successfully carried out simulated launches of cruise missiles on ground targets in a given area,” it said. …

“The flight of aircraft was carried out in strict accordance with international rules for the use of airspace, without violating the borders of other states,” it said.

This coy language indicates acknowledgment of something unusual — and a statement of justification for the operation’s profile.  It has the aspect of what you would write to assert that you had followed the rules (e.g., presumably getting permission from Iran and Iraq to enter their airspace) while doing something especially provocative with your strategic weapon systems.

Strictly regarding missile range and European targets, this move doesn’t matter a lot.  The Russian strategic air arm can hit what it needs to in Europe from various points in western Russia. It doesn’t have to go through the southwest corridor to the Med to do that.

(Being able to get into position by another route does make a difference, however, since the southern course involves third-party nations.  The prospect of Russia aligning conditions to allow strike vectors through Iran, Iraq, and Syria – with which to hold the Med and Europe at risk – is more complex and alarming than the existing prospect of facing bombers directly from Russia, or coming around Norway to the north.)

But that’s not actually the point.  The point is that Putin has now done the most provocative thing he could do with that southwest corridor, short of putting a massive ground force through it.  He signaled his intentions at several points along the way and has now fulfilled them.

With a growing beachhead in Syria and a command-level military stake in Iraq (the joint Russia-Iran-Iraq command center in Baghdad), it is clear that Putin intends to consolidate and expand his scope for action in this theater.  Putting strategic bombers all the way through the inside route from southern Russia to the Med is another waypoint.  As a proof of concept, it’s a watershed — and one that, as noted at my posts from 2015 and 2016, realizes a 300-year-old Russian geopolitical dream.  But it’s not the end state.

In three years, Russia has transformed the strategic situation: she is now effectively un-dislodgeable, short of major action of some kind, from a position in which she is building up the leverage to flank NATO Europe to the south.

The good news is that there is one move that could administer a cold-stop setback to Putin’s momentum.  The U.S. doesn’t even have to make the move; we just have to support it when the Iranian people make it themselves.  That move is regime change in Iran.

A different government in Tehran could, and probably would limit the scope of Russian access through Iran.  With each day that passes, more prospective benefits accumulate from something millions of Iranians already indicate they want to do.